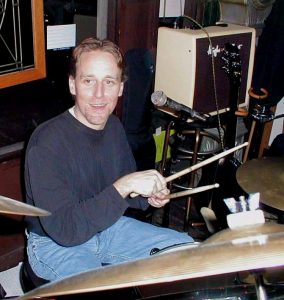 Peoria musician, John C. Eason, 50, was found unresponsive in his home Sunday morning., Oct, 30. His death is under investigation.

Police are investigating the death of a local musician, whose battered body was found in his home Sunday morning, Oct. 30.

John C. Eason, 50, of 2138 N. North St. was discovered unresponsive by an unidentified source who contacted police just before 10 a.m. Eason was pronounced dead at the scene at 10:43 a.m.

Peoria County Coroner Johnna Ingersoll said Eason’s injuries do not appear to be self-inflicted, but would not clarify whether or not his death was caused by a criminal incident.

Eason was a graduate of Morton High School, and was known in the community as a drummer, as well as a vocalist and pianist.

He performed with a number of local bands including The New Impostors, The Pink Flamingos and Special Patrol Group. He also was instrumental in coordinating and hosting open stage musical venues.

Following the news of his death, Eason’s Facebook page began populating with comments from local musicians and friends, who expressed feelings of shock and grief in the wake of his unexpected death. A number of people remember him as “always smiling” and “laughing at everything in sight.” 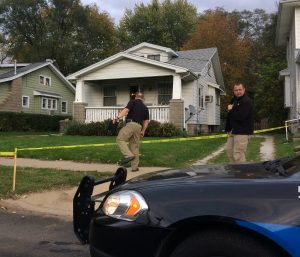 Peoria Police detectives investigate the home of John Eason, 50, who was pronounced dead there at 10:43 a.m. Sunday, Oct 30 after being found unresponsive by an unidentified person. (Photo by Holly Eitenmiller / for Chronicle Media)

One friend wrote, “To my 1980 Blessed Sacrament classmates, we lost one of our family today. John Eason was found dead in his home in Peoria this morning. This is both shocking and terribly tragic. He was a great friend and person. I am deeply saddened. Please say a prayer for John and his family.”

An investigation is ongoing, and an autopsy is scheduled for Monday. Anyone with information regarding this case is asked to contact the Peoria Police Department at (309) 673-4521 or contact Greater Peoria Area Crime Stoppers anonymously at (309) 673-9000, or by web tip at peoriacrimestoppers.com.