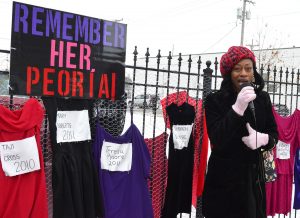 Malinda Smith talks to a crowd gathered at the installation of “Remember Her, Peoria” about her 24-year-old daughter, KeiAmber Beard, who was murdered in her Peoria home in 2013. A dress with Beard’s name on it is one of nearly 100 hanging on a fence on Southwest Adams Street as a visual call to action to end violence.(Photo by Elise Zwicky)

Nearly 100 dresses hanging on a fence along Southwest Adams Street in Peoria are a striking visual call to action that honors women and girls who were murdered or have gone missing in Peoria County over the past 20 years.

“Until we began the research, we had no idea there were this many women and girls who had been killed or had gone missing over such a relatively short period of time,” Susan O’Neal, one of the project organizers, told a crowd of about 50 that gathered in front of the dresses on a recent bitterly cold day.

Titled “Remember Her, Peoria,” the dresses will remain outside Sous Chef specialty grocery store at 1311 SW Adams at least through the end of February.

Each of the solid-colored dresses in all different styles bears the name of a woman and the date she was murdered or went missing. Eight child-sized dresses show the date of when a young girl was murdered.

“The black dresses are for murdered women; red are for unsolved murders; pink are for missing women; and purple are for homicides by domestic violence. The little dresses represent the children that have gone way too soon,” said co-organizer Kristen Meierkord.

“This project has been very emotional and very heart-wrenching,” added the artist and former paralegal. “Something needs to be done to stop this. This is way too many dresses.”

O’Neal and Meierkord are friends who started working on the project in early December while discussing the case of Alexis Camry Scott, a 20-year-old Peoria woman who has been missing since Sept. 23, 2017. The project was inspired by both Scott and the REDress Project for missing and murdered Indigenous women of North America.

O’Neal and Meierkord filed Freedom of Information Act requests to obtain victims’ names from the Peoria Police Department, the Peoria County Sheriff’s Office and the Peoria County Coroner’s Office. All seemed willing to help but were stymied by a technology issue, Meierkord said.

“Basically, what happened was they had to rewrite new (computer) programs to get that information, because they couldn’t just put that information in and have the computer spit out the names,” she explained.

With help from Darcie Cady and Nia McFarland-Drye, the women also talked to families and researched newspaper articles at the library.

“Another reason I wanted to do this project is because I was tired of reading in the local mainstream press about murdered and missing women as though they were not worthy somehow of being treated with dignity and respect,” said O’Neal, who knew some of the victims through her work as an attorney. 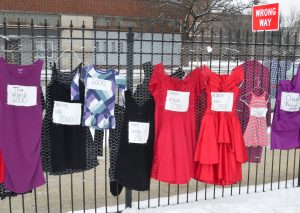 Nearly 100 dresses bearing the names of women who were murdered or have gone missing in Peoria County since 1993 hang on both sides of a fence outside 1311 SW Adams St. as part of the “Remember Her, Peoria” project designed to honor the women and to be a visual call to action to end violence against women. (Photo by Elise Zwicky)

Two of the victims’ mothers shared their pain and asked that anyone with information about what happened to their daughters speak up.

Alexis Scott’s mother, April Allen Scott, said, “I would like our community to realize my daughter is a person. She is my child, and I love my child. To those naysayers who would rather not get involved, I wish you would change the way you’re thinking and take time to look for her and share information so we can find the missing piece to this puzzle.”

Malinda Smith’s daughter, KeiAmber Beard, was murdered by an unknown person in her Peoria home in 2013. “There are people in the community who know what happened, and they keep that to themselves. How could you be so mean?” she asked.

Smith said her 24-year-old daughter was a college graduate and a nurse. “I’m very proud of her still to this day,” she said. “I pray that whoever it is who knows things…let that come out. Give (us) some peace.”

After telling the crowd about a young woman in her own family who went missing in New Orleans in 1999, local activist Sherry Cannon said, “Black women make up less than 7 percent of the United States’ population, but they represent 10 percent of all missing persons cases throughout the country.”

Cannon called for more diversity in the media and more sensitivity in law enforcement and the community to help reunite missing black women and girls with their loved ones. “Overall, there are over 620,000 missing persons in this country,” she said. “This is an epidemic, and we cannot accept it.”

Lisa Snow, who retired as Peoria’s assistant police chief in 2018 and now works with the Illinois Violent Death Reporting System through Lurie’s Children’s Hospital of Chicago, said statistics show that while any woman or girl can be the victim of violent death, young African American females are more likely to be the victim of domestic homicide. 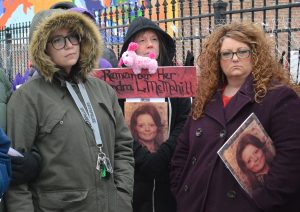 Family of Sandra McMahill Csesznegi, who was murdered by a serial killer in Peoria in 1993, hold a memorial they made for her at the installation of “Remember Her, Peoria,” a visual call to action featuring nearly 100 dresses that represent women and girls who have been murdered or have gone missing in Peoria County. The dresses will remain on a fence on Peoria’s Southwest Adams Street at least through the end of February. (Photo by Elise Zwicky)

Gesturing to the dresses, Snow said, “To me, they all have a face, a history and people in their lives who loved them and wanted better for them. They faced hardships. They had hopes and dreams and talents, and none of them deserved the tragic way their lives ended.”

She urged the public to volunteer at a shelter, donate and otherwise be supportive of efforts to save lives. “If you know something has happened or you know someone is involved in a domestic violence situation, say something. You may save a life,” she said.

With the weather in February being unpredictable, Susan O’Neal said, “There’s probably going to be rain, sleet and snow, and these dresses every day are going to look a little more sad. But sadly, that’s what happened to some of these women, too. And that’s the part that really hurts. I hope we did a good job of honoring them.”

For more information, visit the Remember Her, Peoria Facebook page.