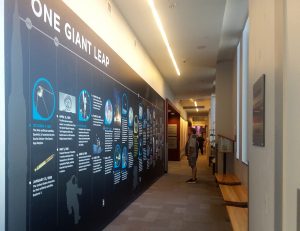 A chronology of the Apollo 11 moon landing mission graces a hall of the Peoria Riverfront Museum. The display begins with the October 4, 1957 Soviet Union Sputnik launch, the mission that launched the space race.

“All we had was this little black and white TV and we weren’t allowed to say a single word, so it was quiet, really quiet, and very emotional.”

Cathie Neumiller, Peoria Riverfront Museum’s Vice President of Marketing & Communications, was just five years old when man first set foot on the moon, but, like most of the 600 million viewers, she understood the gravity of the first moon landing.

“As kids, we could go outside and we could see the moon out there,” she recalled. “We knew there were people walking on it, so we could understand the magnitude of it.”

Fifty years ago on July 20, Neil Armstrong pressed his left boot into the ashen soil of the moon and uttered the now-famous phrase, “That’s one small step for man, one giant leap for mankind.”

A global celebration of the 50th Anniversary of Apollo 11 mission is well underway, and PRM has assembled a series of events and displays in observance of one of man’s greatest accomplishments.

“We remember it like yesterday, sitting in our living room watching the moon landing,” Ron Miller, of Peoria, said at the museum’s July 20 “One Giant Party”. “It was shocking and wonderful. We still really can’t believe it. The words, though, ‘One small step …’ gave me chills. They still do.”

Ron and his wife, Lana, were newlyweds when they watched in awe as Neil Armstrong and Buzz Aldrin bounced about the moon’s surface. Lana’s wonder was as great as her husband’s, though she admitted to feeling upset at times.

“I was really scared at times, especially during reentry,” Lana recalled. “That’s the most difficult part, and they had to land in the water. It was very stressful waiting for them to land.”

On July 19 and 20, the museum presented the film, “Apollo 11: First Steps”, in which guests were able to view never-before-seen 70 mm footage and audio recordings from the mission. During “One Giant Party”, the film also ran on a large wall in a commons area, where it could be viewed  while enjoying drinks and hors d’oeuvres.

Many of the party guests dressed in 1960s attire; some wore traditional outfits of the day, others dressed in the Hippie counterculture style. Those who weren’t viewing the movie, mingled about engaging in interactive displays, such as “Pin the Eagle on the Moon”.

The anniversary celebration included space-themed science experiments, green screen moon selfies, telescopic moon viewing and a final showing of the Apollo 11 film, which Neumiller said revealed many astonishing facts of the 240,000-mile voyage to the moon. 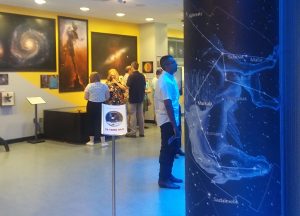 Guests at the “One Small Step, One Giant Party” enjoy interactive displays at the Peoria Riverfront Museum while waiting for a showing of “Apollo 11: First Steps”, a trove of never-before-seen 70mm footage and audio recordings. Museum events celebrating the 50th anniversary of Apollo 11 will continue through 2019.

“When they were attempting to leave the lunar surface, the switch to launch them was broken,” Neumiller said. “They had to use a pen to to flip the switch. Can you imagine that? A lot of people just don’t understand the risks these astronauts had to take.”

“One Giant Party” may be over, but the celebration isn’t finished. On August 16, from 7-9 p.m., PRM will host “Wine & Cheese Under the Stars – Apollo: 50 Years”, where guests will enjoy more than 90 wines and cheeses, learn the history of the Apollo 11 mission and tour landing sites.

A month later, PRM will reveal “The Moon”, a 13-foot diameter illuminated moon which will remain on permanent display. The Moon was designed for PRM by artist Luke Jerram of the United Kingdom.

Neumiller said PRM will host a “Moon” exhibit from September 14 through November 10, which will include NASA and space-related artifacts. For more information on the Apollo 11 anniversary, and all other museum exhibits and events, visit www.peoriariverfrontmuseum.org.