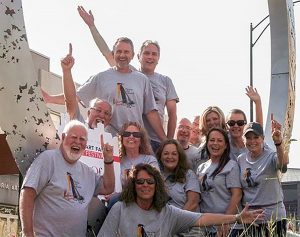 Art, music, food and hands-on creative activities for all ages will be featured at the 54th annual Fine Art Fair this Saturday and Sunday  at the Peoria riverfront.

Named one of the top 50 art fairs in the country, the Fine Art Fair has survived despite a difficult year in which the financially strapped Peoria Art Guild suspended programming and sold its building in downtown Peoria.

“The Fine Art Fair has been one of the marquee events in Peoria for a long time that draws people from all over the region,” said Bill King, who took over as the guild’s president in May. “We were up against the wall last year, but our board did everything in our capacity to make sure (the fair) went on.”

King credited the fair’s survival to “an enormous team effort” by the board, the Fine Art Fair committee, two part-time directors and the Peoria Park District, a long-time collaborator that has expanded its role in putting on the fair this year.

“The park district has been fabulous,” King said. “That’s been huge for us. They’ve helped offset some of the day-to-day (organization of the fair), so that’s taken a lot of that burden off.”

“We strongly value what the fair brings to the riverfront and the community as a whole. We also want to see the fair succeed into the future and saw this as a necessary step to ensure that happens,” Conrad said.

One job the Park District has been helping with is recruiting volunteers to help do things such as set up the fair, work in the kids’ area and pour beer at the beverage tents. About 500 volunteers are needed to keep the fair running smoothly and to help at a preview night on Friday, Sept. 23.

“I think there is a genuine interest in the arts in the Peoria community,” Conrad noted. “We are very fortunate that the Fine Art Fair has a longstanding volunteer committee that assists in the operation of the fair each year. Many of the members of this committee have been involved for over 10 years. With people like this on the committee, it helps in the recruitment of others.”

New to the fair this year are the addition of an emerging artist from Peoria and a guest artist from Mendota.

Other changes will include an expanded Kids’ Art area that will focus on art education, the painting of a community mural and hourly musical performances by various local bands, including Ray Long & the Highway 61 Band and the Bradley Jazz Ensemble.

“We feel that we have added some fresh ideas,” said Ardelle Wright, who’s co-directing the fair with Cathi Hawkinson. “Our goal was to make something that was already good even better.”

The Kids’ Art Fair will offer 14 make-and-take art projects with a concentration on world-renowned artists such as Van Gogh, Alexander Calder and Wassily Kandinsky. For a flat fee of $5, each participant can create projects related to famous artists and projects that include Aboriginal art, African art and Marvel Comic Books’ superheroes.

Creating art will not be limited to the kids, however. Adults can take part in a free interactive community mural, which will come together tile-by-tile over the two-day event. The mural is a nod to various works by poster artist Chuck Wimmer.

In addition, food vendors will have expanded menus this year, along with a wine and beer tent.

“We’ve worked hard for the ‘Top 50’ designation,” said Hawkinson, a 13-year veteran as Fine Art Fair director. “To be nationally recognized is an honor, especially when other elite art fairs in the county are either in or adjacent to major metropolitan cities. It speaks volumes for the people who consistently attend the fair and for the dedication of our volunteers and sponsors who make this art fair happen.” 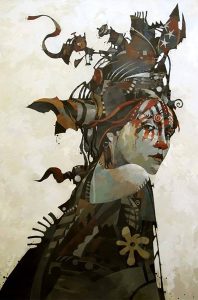 Among the artwork that will be exhibited and for sale at the Peoria Fine Art Fair is a painting titled “Lady of Remarkable Secrets” by Bruce Holwerda. The fair will feature art, music, food and hands-on art activities for all ages. (Photo courtesy of the Peoria Art Guild)

The Peoria Art Guild is hoping to start offering some adult art-related classes this winter and children’s classes next summer.

“We’re on a lot better footing financially since we sold our building, and the board is trying to keep the Art Guild alive and moving forward,” King said.

The engineering firm Crawford, Murphy & Tilly Inc. bought the 8,000-square-foot building at 203 Harrison St. in May and is allowing the Art Guild to use the basement rent-free through the end of 2017.

The oldest nonprofit arts organization in Illinois, the 135-year-old guild started having financial trouble during the 2008 recession and has also suffered due to a loss of state funding caused by the Illinois budget crisis.

“There are fewer donations from corporate sponsors in general, and the lack of a state budget has created kind of a double punch,” King said. “We’re fighting through it, though. We’re bouncing back.”

GOING TO THE FAIR

Tickets for that cost $40 for guild members and $50 for nonmembers.