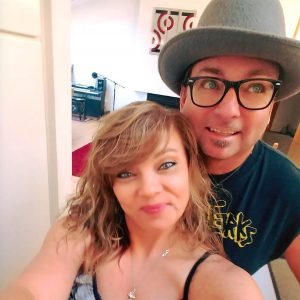 Musician Brian Neumann poses with his girlfriend, Tina Rose. Neumann earned the nickname “Troubadour” after taking to the streets in Peoria to perform on an electric skateboard during the pandemic. (Photo courtesy of Brian Neumann)

When the COVID-19 pandemic sidelined all his bookings, musician Brian Neumann of Peoria took his act on the road—literally.

Neumann created a bit of excitement on May 16 when he rigged up his electric skateboard to be a traveling stage and skated through several neighborhoods in North Peoria, singing and playing guitar for more than an hour.

Neumann said he was pleasantly surprised at the strong reaction he got from people he passed while performing on the street.

“I thought maybe they’d go: Oh, that’s weird. But they were literally running out of their houses to see me with their phones up in the air. It got a much bigger reaction than I thought it would. It was great,” said the Ottawa native.

Neumann, who plays solo and also in a couple of bands called Punch Fatty and Strangerz, sometimes goes by the moniker Neumann Superhuman but picked up a new nickname during his street performance.

Jennifer Jacobsen-Wood and Mary Hosbrough, who document their goal to walk every street in Peoria on their Facebook page Pedestrians in Peoria, spotted Neumann while walking through the Thousand Oaks neighborhood off Knoxville Avenue and dubbed him “the Troubadour,” a name Neumann later said he loves.

“When Mary and I saw Brian, we were in the latter half of a very long walk. Our feet were hurting, and it had rained on us twice. Seeing him lifted our spirits so much. It was a moment of brightness during the pandemic, too. Something that might not have occurred during normal times,” Jacobsen-Wood said.

“It was such a novel moment of joy in an otherwise dreary day during an overall stressful time,” she added.

Neumann stopped in front of a few houses to serenade people who were out, but mostly just skated through the neighborhoods playing songs.

“I didn’t really plan out a route or anything. I was just riding around, hitting all the local neighborhoods near where I live,” he said. “It was just nice to see everybody smiling and getting their (phone) cameras out. It was pretty fun.”

Neumann mostly plays rock and pop music—anything from the Beatles to Foo Fighters to Green Day.

“I know thousands of songs. I’m pretty much to the point where if someone yells out a popular song from the ’60s, ’70s, ’80s or ’90s, I can probably play it,” he said. “That day, I just played whatever popped into my head at the time. Everybody was just staring and smiling. It was pretty amazing.”

Like other musicians during the state-ordered quarantine that ran from mid-March to the end of May to try to slow the spread of the novel coronavirus that causes the COVID-19 disease, Neumann had been doing anything he could to keep performing.

“With the shut down, since I’m not playing, I’ve been doing live shows on Facebook,” he said. “Even when we were doing shows in clubs and bars and parties, we always tried to have gimmicks and do different things to make it interesting, so my girlfriend (Tina Rose) and I have been trying to come up with different fun ideas for the shows to keep them interesting.”

One Facebook performance started with Neumann shining a flashlight in the dark, trying to find the rock-and-roll show, while another was beach-themed.

“I was trying to think of the next show and what it could be, because I kept trying to top the last one,” he said. “And I’ve been skateboarding for longer than I’ve been playing music, so I thought maybe I should do something on the e-board.”

Neumann’s Inboard M1 electric skateboard has a remote control with a throttle and brakes, so he rigged up a way to control it while playing guitar and attached a long boom pole on the front to hold his camera to broadcast the performance on Facebook Live.

“The e-board goes about 25 mph and has headlights and taillights and brakes,” Neumann said. “I was playing the guitar with the remote with a pick taped to it. It was a little awkward to steer, but it wasn’t terrible.”

The Facebook Live show didn’t broadcast as well as he would have liked due to technical issues, but the audience on the street loved it.

He’s not sure when he’ll do it again, but he’s considering playing on the Fourth of July along the Riverfront.

The annual UnityPoint Health Red, White and Boom fireworks show isn’t happening on July 4 this year due to the pandemic, though organizers have said it may be rescheduled later in the year.

“I think it would be fun to take it downtown and play down around the river, if I can make that happen,” Neumann said.

He’s performed about 10 online shows during quarantine and may do more but is looking forward to  getting back to playing live music at Peoria venues as Gov. Pritzker’s five-phase plan to slowly re-open the state progresses.

“I had not done any online shows before quarantine and had never even done one song online before. For some reason, I can play in front of thousands of people and not be nervous, but playing to a phone makes me nervous,” Neumann said with a chuckle.

Before the pandemic, Neumann often played at Peoria venues such as Brasky’s Bar and Grill and Tartan Inn.

For more information or to book Neumann for a performance, message him on his Facebook pages at Brian Neumann or Neumann Superhumann or call him at (815) 575-1554.