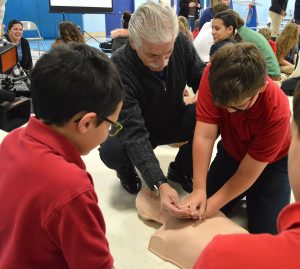 St. Edward’s Catholic School Principal Mike Domico shows fifth-grader Bruce Sparfven how to place his hands to perform CPR during a training session at the school. Domico, who worked as an EMT for 20 years, has made a full recovery after suffering sudden cardiac arrest at the school in September thanks to the CPR skills of a teacher who had just learned it in July. (Photo by Elise Zwicky/for Chronicle Media)

St. Edward’s Catholic School principal Mike Domico worked for 20 years as an emergency medical technican but never imagined he would one day be the one needing CPR

“I never thought I’d be on the other side of it. Because I run. I exercise a ton,” said Domico, who collapsed in the Chillicothe school’s cafeteria Sept. 5 in sudden cardiac arrest.

Thanks to the quick response and CPR skills of a teacher who had just learned it last summer and a shock from a Cardio Reviver AED device, Domico is now fully recovered.

He’s in a small group since fewer than 10 percent of cardiac arrest victims survive the event nationally, according to Josh Bradshaw, community resource manager for Advanced Medical Transport of Central Illinois.

AMT, which treated Domico at the scene and took him by ambulance to a Peoria hospital, returned to the Chillicothe school recently to celebrate Domico’s recovery, recognize the efforts of junior high teacher Luke Heineman and to turn the event into a teachable moment for about 30 of the school’s students.

AMT staff taught the fifth- through eighth-graders, along with their teachers and a few parents, how to help a person in sudden cardiac arrest by doing hands-only CPR and using an AED.

“Sudden cardiac arrest is the leading cause of death for people over 40 in America, but bystander CPR and AED application can nearly triple a person’s chance of survival,” Bradshaw told the kids before they broke into groups of three to practice chest compressions on rubber half-torso mannequins.

“We routinely recommend that we start teaching hands-only CPR around the fifth grade. They can do it long as they are strong enough to get the depth of the compressions,” said Lauren Emanuelson, AMT’s Race to the Top coordinator. Race to the Top is the company’s strategy for achieving among the best cardiac arrest resuscitation rates in the nation. 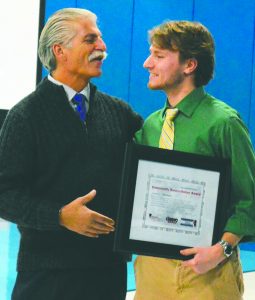 St. Edward’s Catholic School Principal Mike Domico thanks junior high teacher Luke Heineman for jumping in to give him CPR when he suffered a sudden cardiac arrest in September in the school cafeteria. AMT returned to the school recently to celebrate Domico’s full recovery, laud Heineman’s efforts and teach students how to do hands-only CPR. (Photo by Elise Zwicky/for Chronicle Media)

Hands-only CPR, sometimes called bystander CPR, is chest compressions without mouth-to-mouth breaths. It’s recommended for use by people who see a teen or adult suddenly collapse and has been shown to be just as effective as CPR with breaths in the first minutes of the arrest, according to the American Heart Association. The steps are simply to call 911 and then push hard and fast in the center of the chest at about 100 beats per minute.

“It takes some of the stigma away,” Emanuelson said. “People don’t want to do CPR if they have to put their mouth on a patient. But every minute that somebody goes without CPR, their chance of survival decreases by 10 percent.”

Heineman, the teacher who helped save Domico by quickly performing chest compressions, had just learned CPR two months prior to the principal’s collapse as part of a graduate program he’s completing.

“I was on my lunch break up in my room when I heard kids come running up and shouting that Mr. Domico had fallen on the ground and wasn’t moving,” Heineman recalled. “Immediately after that, one of the custodians came running up asking if anyone knows CPR, so I bolted down there.”

The scene was chaotic because Domico had hit his head when he fell and was bleeding profusely, Heineman said. “It was a very scary scene. But I think the training was recent enough that I was able to push the emotions aside and do what I’d been trained to do.”

Heineman credited the kids with immediately running to get help. “I think it’s great that the kids are being trained in it,” said. “We want to get as many people certified as possible so it doesn’t have to come down to just one person being able to help.”

Domico woke up three days later in the hospital with no memory of what had happened.

“The scariest part about it is I didn’t have any of the signs or symptoms before it all happened,” he said. “I just went down.”

Domico had worked as an EMT in Metamora when he was the band director at Metamora High School from 1978 to 2002. “The AED’s first started coming out around then. We used it many times. I did CPR many times on my own, and the success rate is just not that good,” he said. 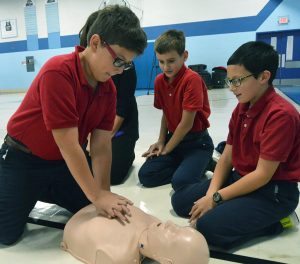 Fifth-grader Bruce Sparfven practices CPR on a mannequin while classmates Sam Griggs and Tony Sposito look on at St. Edward’s Catholic School in Chillicothe. The boys were among about 30 students at the school who learned hands-only CPR from AMT representatives after the school’s principal survived sudden cardiac arrest in September thanks to a teacher’s CPR skills. (Photo by Elise Zwicky/for Chronicle Media)

“What I’m hoping the kids will take away from this (training) is that when they see somebody like this go down, they can jump into action. Not only can they go through the protocol of starting to save a life by getting help, now we’ll have 30 or 40 more consumers that can start hands-only CPR when they see something like this.”

“Kids are eager to learn it and actually provide the skill. The sooner we can get them hearing about it and learning about it, the more they can talk to their friends and their family about it, because it can happen at any time,” Johnson said. “Cardiac arrest has no face. It can happen to anyone. So having everyone prepared and at least knowing the basics of it is really what can save someone’s life.”

Emanualson added, “It’s not difficult. As long as you’re capable of getting on the floor and pushing on a chest, you can do hands-only CPR.”

Fifth-grade teacher—Kristal Toman, who’s already trained in CPR, was happy to see the kids learning the skill. “I definitely think it’s good for kids this age to learn bystander CPR. They can take this as a skill that they’ll continue to learn, because they know this saved a life and they’ll never forget that,” she said.

AMT also donated two additional AEDs to the church and school so each building will have one.

For more information about how to arrange hands-only CPR training for a school or group, contact Josh Bradshaw at 309-453-1308 or by email at jbradshaw@amtci.org.