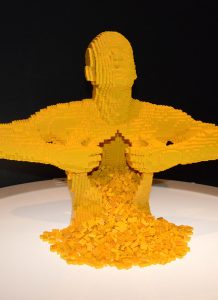 Among the 80-some sculptures made exclusively from LEGO bricks in Nathan Sawaya’s “The Art of the Brick” exhibition at the Peoria Riverfront Museum is this one simply called “Yellow” that depicts a life-size man ripping his chest open with thousands of LEGO bricks cascading from the cavity. A version of “Yellow” was included in Lady Gaga’s music video “G.U.Y.” (photo by Elise Zwicky)

Eleven-year-old Chad Turpin was on a typical class field trip to the Peoria Riverfront Museum when he and some classmates got pulled into a press conference for a new exhibit of the world’s most elaborate display of LEGO art.

“This place is like my dream,” exclaimed the wide-eyed fifth grader from Knoxville Junior High School as he stood next to a 20-foot-long Tyrannosaurus Rex skeleton made by artist Nathan Sawaya from 80,020 LEGO bricks.

“The Art of the Brick” opened last weekend at the Peoria Riverfront Museum at 222 S.W. Washington St. Named one of CNN’s top 10 “Global Must-See Exhibitions,” the critically acclaimed show is the first major museum exhibition to use LEGO bricks as the sole art medium and is designed to inspire ingenuity and creativity.

“I used to love to build with LEGOs, so it’s amazing to see a LEGO statue,” said Turpin, adding that he doesn’t build with the iconic toys much now but was feeling inspired to start again if he receives some LEGO bricks for his birthday.

“This is an exhibition that actually begs an interesting question: what can you do with one single LEGO brick put upon the next, put upon the next, and so on? Nathan Sawaya has answered this question for us with this exhibition that features over 80 works and probably over a million and a half LEGOs in total. So parents, get ready. You’re going to have to pony up,” he said.

Sawaya previously worked as a New York City corporate lawyer before becoming an award-winning artist. With art studios now in Los Angeles and New York, Sawaya has transformed LEGO bricks into thought-provoking large-scale sculptures. In addition to the T-Rex, the exhibit includes reimagined masterpieces such as Leonardo da Vinci’s “Mona Lisa” made from 4,573 bricks, as well as life-size people and super-sized objects.

Sawaya will be at the museum Aug. 10 to give a presentation on art and the importance of creativity.

According to a frequently-asked-questions sheet prepared for museum docents, Sawaya uses the same exact LEGO bricks that can be found in stores, spending more than six figures on bricks annually. This way, anyone who gets inspired to make their own creation can buy the same bricks used by the artist.

The Tyrannosaurus Rex skeleton is the biggest sculpture Sawaya has built to date, though he also once built an advertising billboard that measured 15 feet high and 53 feet long and used more than 500,000 LEGO pieces. His smallest piece ever was a tree with one brown piece on the bottom and one green piece on the top. 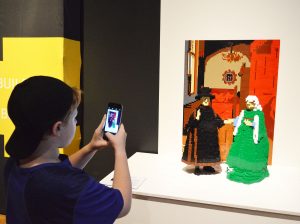 Chad Turpin, 11, of Knoxville snaps a photo of a sculpture at the Peoria Riverfront Museum’s “The Art of the Brick” exhibition, which is the first major museum exhibition to use LEGO bricks as the sole art medium. Lawyer-turned-artist Nathan Sawaya transforms LEGO bricks into thought-provoking large-scale sculptures. (Photo by Elise Zwicky)

At the end of the exhibition, visitors can create their own brick masterpieces in a hands-on interactive LEGO brick gallery. “The Science of the Brick” offers building challenges, such as designing and racing a car, game stations and open play spaces.

Conger said the most fascinating part about the exhibition to him is how it ties to the museum’s mission to touch the tenets of art, history, science and achievement all in one exhibit.

“One part of this exhibition I don’t want you leaving without paying attention to is how, through these fairly simple tools of invention, he creates expression of the human condition,” he added.

Peoria Riverfront Museum CEO John Morris said the exhibit “blew the roof off in attendance and excitement” when it was previously installed at the Oregon Museum of Science and Industry. Museum Visionary Society Council member and founding museum board member Sally Snyder, whose sister is on the Oregon museum’s board, brought it to the local museum board’s attention.

“This is an exhibit that I honestly think is going to break the bank,” Snyder said, telling the Knoxville students how lucky they were to get a sneak preview. “Portland had lines around the block waiting to get in to see this exhibit, and that is a huge museum. This is a great opportunity for Peoria and something to put us on the map again.”

Mark Spenny, CEO of exhibit sponsor CEFCU and a member of the museum board, also had a personal connection to the exhibit.

“My wife and I have four grandchildren. And the summer following each one of them turning 11 years old, we have taken them individually to New York City. It’s meant to be a journey of discovery as the city has such a great diversity of art and theater, history and architecture, economics and cultures from all over the world,” he said.

In planning the itinerary five years ago for their now 16-year-old grandson’s New York trip, Spenny said, “The number one thing on his agenda that he wanted to make sure he saw was this exhibit, which at the time was at the Discovery Channel Museum in New York City. Of everything in New York City, our 11-year-old grandson said this is what I want to go see more than anything else. So we know the power of the attraction this exhibit has, and we’re very excited to see it here.”

Other sponsors making the exhibit possible at the nonprofit privately funded museum include the Gilmore Foundation, Precision Planting and the Visionary Society. The program is also partially supported by a grant from the Illinois Arts Council Agency.

“The Art of the Brick” exhibition runs through Sept. 2. Admission is $18 for adults, $17 for students and seniors 60 and older, and $16 for youth ages 3 to 17. Museum members get in free. For more information, visit the Peoria Riverfront Museum website at www.riverfrontmuseum.org or call 309- -686-7000