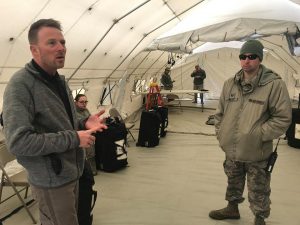 Peoria County Coroner Jamie Harwood discusses coroner operations during a tour of his facility on Seneca Place in Peoria. Should a catastrophic event occur, the Illinois Air National Guard 182nd Fatality Search and Recover Team will coordinate with Harwood and other response agencies. (Photo by Holly Eaton / for Chronicle Media)

When a deadly catastrophe occurs and there aren’t enough available resources to handle it, it’s considered a Mass Fatality Incident.

Peoria County Coroner Jamie Harwood wants to be ready for that.

“I don’t think it’s too far off the mark that an MFI could happen here in Peoria,” Harwood said. “It’s happening all over the world where you have five, 10 and sometimes up to 15 and 20 victims from an event.”

The day served as an employment exercise for the 11-member crew and also prepared the unit to coordinate with the coroner’s office should an MFI occur.

“The purpose today is two-part, the first was for them to setup their mobile morgue, so I could see what they have available if we ever have a mass fatality incident here in Peoria,” Harwood said. “Today was also meant to help them learn and continue to train setting up their equipment and to become more proficient at it. That’s what the purpose of a training exercise is for continuous processing and improvement.”

The FSRT unit,  based at Gen. Wayne A. Downing Peoria International Airport, and is part of the 182nd Airlift Wing. The FSRT mobile morgue consists of a small fatality processing tent, a large personnel tent and two mobile refrigerated coolers.

“The processing tent is used to property tag and preserve the remains before they’re transported to the coolers,” Tech Sgt. Evan Parent explained. “The personnel tent is where we keep our gear and dress and we have the two refrigerated coolers with room for 12 remains in each cooler.”

Simply put, there’s room for 24 bodies with the FSRT unit. Harwood’s can house 12. If called upon, OSF St. Francis Medical Center can provide a cooler that can hold 66 fatalities. That’s 102 bodies that can be properly processed and stored between these agencies, and there are other agencies available if the need is greater.

“We have a state-wide agreement with coroners, so I can call on them for staff and resources,” Harwood said. “Nearby agencies, Adams County, McLean, Tazewell, Woodford, Stark, would come here to help us with fatalities.”

It may seem a bit far-fetched for most people that a catastrophic event with mass fatalities could occur in the Peoria area, but there are many realistic scenarios in which that could happen. An accident involving an airplane or a passenger train, ship or bus, can result in an MFI.

“The worst thing we could possible do is not be prepared for it,” Harwood said. “Even on the smallest scale is what our goal is.”

One need only peer back in time to learn of a local MFI that happened long before resources were available to manage it. In April, 1852 two steamships collided in Pekin, killing more than 110 people.

As documented in “Pekin: A Pictorial History, ”The 110 bodies that were recovered were placed side by side under the walnut and oak trees on the bank and every home in the vicinity became a temporary hospital. One rescued passenger, en route to Texas, reported that many of the victims he had seen on board were not recovered. A final count of those who drowned was never ascertained.”

With current resources, however, such calamity may be handily managed with planned coordination between a handful of agencies.

“There could be a bridge collapse, a school bus accident, a mass shooting … anything like that is possible in today’s world,” Harwood said. “Without being prepared it, would be horrible. But I know now that I have two phone calls, maybe three, to make and then the groups and collaborations we have will mobilize, which is perfect.”