Staff at a previous Camp Kearney summer camp line up next to a four-season 250-foot long toboggan slide at the camp, which is a ministry of the South Side Mission. The camp also offers a zip line, disc golf course and climbing wall, among many other activities. (Photo courtesy of Camp Kearney)

The South Side Mission’s Camp Kearney has long been a place for kids to escape city life and now even offers its own trendy escape room.

The camp, which can be rented in the off season, already offers a high ropes course, zip-line and climbing wall and now has its own version of an escape room built by South Side Mission associate director of ministries and Camp Kearney director Paul Mulholland and South Side Mission lead ministry assistant and assistant camp director Arin Haven.

“We designed the difficulty for it to be done by kids from 8 to 16 years old, but we’ve had plenty of adults tell us it’s just as fun, if not more fun, than some of the escape rooms they’ve done at other places,” Haven said. “It’s a great team-building thing and great for families. It’s been a huge hit.”

The two came up with the idea after participating in an escape room while on a staff retreat in Wisconsin. Because the camp is operated strictly on donations, the room had to be built on a low budget with props and items that already existed within the camp.

“We repurposed one of our cabins that was kind of out away from the others for the escape room,” Haven said. “And we went with more of a mechanical mechanism for most of our elements, rather than magnetic or electrical.

The challenge of the room is to solve the mystery of “Miss Kearney’s Cabin.” Groups of three to five people are required for the activity, which involves solving puzzles, finding codes and unlocking objects.

“It’s themed after (long-time South Side Mission worker) Margaret Kearney, who originally started Camp Kearney more than 50 years ago,” Haven said. “So we tried to make it look like an old-fashioned house that she might have lived in. We built a wooden mailbox, sink and cabinet and added some old-looking dishes, an old-style dresser and a well to get water out of.”

Most escape rooms give participants an hour to escape, but the Camp Kearney room has no limit. “We also don’t close any doors or lock any doors,” Haven said.

“Everything in the room is meant to be played with and messed with because it probably has something to do with the answer,” he added. Most groups take 35 to 45 minutes to solve the mystery.

“Every single kid at Camp Kearney last summer got to experience the escape room,” Haven said. “Even adults have had a really good time with it and struggled with some of the elements that are in there.” 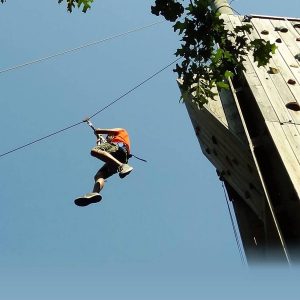 A zip line at the South Side Mission’s Camp Kearney is just one of many outdoor activities the camp offers at a free summer camp experience for children from inner-city Peoria and rural central Illinois. The camp recently added its version of a trendy escape room. (Photo courtesy of Camp Kearney)

Haven and Mulholland plan to offer an open house before the end of the year for the public to try out the escape room, which they’ll announce on the Camp Kearney Facebook page once a date has been set. In the meantime, the escape room is available to church groups, families or other organizations that rent the camp facility.

Rental rates vary depending on which activities groups would like to do. “The South Side Mission is a not-for-profit and we’re a ministry of the South Side Mission, so any money we charge people (to rent the camp) is just enough to keep the facility running and up-to-date,” Haven said.

“One of our goals is to make Camp Kearney be similar to what a lot of kids’ families are paying a bunch of money to go to in the summer. We don’t want it to have the stigma of being a free camp, so it must not be as good. So we try our best to add new activities and new things to do around camp that make it a little more exciting,” Haven said.

Other recent additions to the camp are a four-season 250-foot long toboggan slide and a nine-hole disc golf course.

Camp Kearney is open to any child in the area from 6 to 16, but registration opens first to kids from Peoria’s south side. Children 6 to 8 years old attend day camp only, while 8 to 16 year olds spend a week at overnight camp in smaller age groups. The camp’s stated mission is “Loving kids to Christ.”

“We want the kids that come to camp to see and understand that people love them and care for them and look out for them,” Haven said. “Some kids show up and don’t have the proper amount of clothing or shoes that fit or the proper bedding or toiletry items, and we provide that stuff to them. We mainly just want to give them a week in their life that is the greatest week that we can possibly give them with words of encouragement, and that’s regardless of what type of household they come from.” 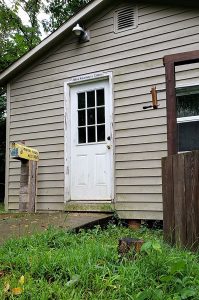 “Miss Kearney’s Cabin” is an escape room that was recently built at the South Side Mission’s Camp Kearney in Canton. The room was built for the summer camp kids but can be used by church groups, families and other groups that rent the camp in the off season. (Photo courtesy of Camp Kearney)

Each summer the camp hires 15 to 20 counselors, primarily high school and college age, who stay at the camp and receive food, housing and laundry facilities in addition to a salary. Employees undergo an extensive background screening.

In the off-season, Camp Kearney utilizes volunteers for various tasks, including weeding, trimming trails and painting.