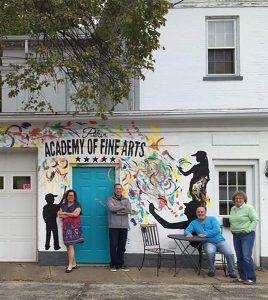 A nonprofit arts organization geared for all ages has found new life in a former funeral home in Pekin and is drawing participants from around central Illinois.

The two-year-old Pekin Academy of Fine Arts is now housed at the Mansion on Walnut, 420 Walnut St. in Pekin, after moving from the Speakeasy building on Court Street.

“We moved in October because it was a better location and a better fit for our organization,” said Shannon Cox, PAFA executive director. “It’s a beautiful facility.”

The Walnut Street building is now owned by Bonnie Harken, founder and CEO of Crossroads, which offers life coaching programs for women. Harken operates Crossroads out of the Mansion on Walnut, and PAFA sometimes collaborates by offering art therapy components, Cox said.

The Mansion on Walnut, which is a separate entity from PAFA and Crossroads, is also available to rent for weddings, bridal showers, birthday parties, office gatherings and other events.

“This facility has lots of opportunity for events and things we can do with the arts that we couldn’t necessarily do at the other place,” Cox said.

One major difference is the renovation of the building’s garage into a climate-controlled child-friendly arts classroom. PAFA offers ongoing fine art classes for children ages 5 to 13 in six-week sessions that explore different mediums and culminate with an art reception in the Mansion.

“The kids can get out in the classroom and get messy and it’s OK,” Cox said. “Before, every time there was a class we had to tear it down afterward.”

PAFA also offers Lego, animé, writing and craft clubs for children and is investigating the possibility of starting an after-school art program for children who walk from nearby Jefferson Primary and Washington Intermediate schools. 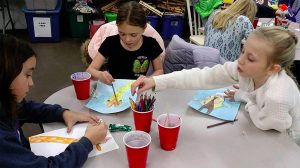 an adult coloring event, stitch club, graphic web design classes, a workshop on essential oils and a 3D printing class in collaboration with the Pekin Public Library, which has a 3D printer. Cox hopes to add fine art classes for adults soon.

“We draw people from all over the area,” she said. “We’ve had people come from as far away as Bloomington and Chandlerville.”

Class fees range from $25 for one-time classes to $100 for six-week sessions. PAFA offers scholarships, funded in part by donations from the Rotary and Kiwanis clubs, for people who can’t afford the fees. A calendar of events and scholarship applications are available on the PAFA website at www.pekinacademyoffinearts.com.

Gigi Weydert of Marquette Heights has enrolled her three kids, ages 8, 9 and 11, in various art classes at PAFA and has participated in adult paint nights herself.

“My daughter is very creative and really never had an outlet to work on that until finding these classes,” Weydert said. “Even myself, I never really liked to draw or paint and now I’m kind of addicted. It’s also given us things we can do together as a family.”

When located at the Speakeasy, PAFA participated in First Fridays in which artists—primarily in Peoria–open their studios to the public. However, Cox is considering hosting a Fourth Friday event at the Mansion on Walnut to avoid a conflict with people who want to attend events in both Pekin and Peoria.

“I’ve asked a lot of the Peoria artists how they felt about me switching to the fourth Friday, and they thought it was a wonderful idea so more of them could come over and support us here in Pekin,” Cox said.

She also plans to host art exhibits at the Mansion on Walnut, likely beginning in March, and invites area artists to contact her if they’re interested in having a show. Other future plans may include a sculpture area in the yard and possibly a small outdoor nature camp.

“We have no state or federal grants at this point,” Cox said, adding that the grant situation is not likely to change soon given the state’s longstanding budget impasse.

“We’re always looking for new instructors and people who have a craft they want to share,” she said. A teaching degree is not required but instructors must pass a background check. 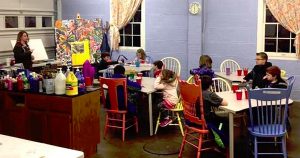 PAFA currently has three permanent instructors. Several local artists who have taught PAFA classes in the past have since opened their own studios, including Terri Gambetti, who opened Leo’s Art Studio, and Cindy Bonnette, who opened the Vinyl Art Studio, both in the downtown area.

PAFA is governed by a five-person board of directors presided over by Pekin chiropractor Michele Moul. The organization was Cox’s brainchild, though she gives full credit to the artists and board.

“I just felt the need for this kind of thing in the community,” Cox said. “I had good people around me, and I got a good attorney to help me form a nonprofit. I’m really excited about how it’s come together and how it’s growing.”

For more information, visit the PAFA website at www.pekinacademyoffinearts.com or call (309) 267-2058.