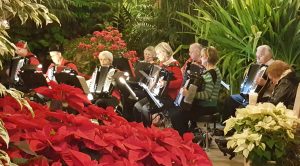 When the biting winter chill becomes too much to handle,  a walk through a tropical garden might be just the thing to warm the soul.

The Luthy Botanical Garden Conservatory, 2520 N. Prospect Road, is currently hosting a festive poinsettia show among the year-round tropical collection with an educational Kwanzaa display coming up the last week of December.

“The Conservatory is always a serene break from the winter,” said Bob Streitmatter, Luthy Botanical Garden manager. “A lot of people will even walk the  (outside) gardens if it’s not too snow-covered. The garden takes on a quiet sort of beauty in the winter.”

The Conservatory has featured an annual holiday poinsettia show since the garden was established in 1951, but Streitmatter thinks the tradition likely began long before that in Glen Oak Park.

“We have some old photos in the archives that show poinsettias on display in the Palm House, so it could be going back to the 1800s,” he noted.

The old Palm House opened in 1896 at the opening of Glen Oak Park and was demolished in 1951 when Luthy Botanical Garden was built. The Palm House was located where the Glen Oak Zoo now stands, according to an Illinois Digital Archives collection at the Peoria Public Library.

Luthy Botanical Garden features 15 theme gardens in addition to the 2,500-square-foot tropical Conservatory. The garden was named for George Littlewood Luthy, a former president of the Peoria Park District, which owns the garden.

The poinsettia show opened in mid-November and will run through Dec. 31. Eight different poinsettia varieties are featured.

“Some are very traditional poinsettias and some are not. We have some shocking pinks, and we have a lot of white and variegated (plants), as well as the traditional red,” Streitmatter said.  “The varieties we feature change every year, and since we are a botanical garden, we do have some that aren’t on the open market yet.”

The plants typically come to the garden in July as two-inch tall seedlings that are planted and grown to the full-sized plants now on display. The display is meant to be educational as well as festive.

“Education is always part of our mission,” Streitmatter said. “We do a lot of tours and talks, and there’s some signage among the plants.”

Next year the garden may even sell some of the plants on a first-come first-served basis. “We haven’t had the production capacity to sell them in the past, but we’ve had such good luck with production and the way we’ve arranged it this year that we’re going to try to do that next year,” Streitmatter said.

While the Conservatory is open daily between 10 a.m. and 5 p.m., candlelight walks are featured on Friday and Saturday nights, with the last one taking place from 6 to 9 p.m. Friday, Dec. 23.

“It’s a completely different perspective with the candlelight glow than what you see during the daylight,” Streitmatter said.

Peoria native Bobbie Brown, who now lives in Marseilles, visited the Conservatory last December with her husband and hopes to make it a yearly tradition.

“I would recommend Luthy Botanical Garden to all who love nature no matter what the season,” Brown said. “It’s Peoria’s little hidden jewel.”

Brown said she enjoyed the soft shadows and textures of the garden in the flickering candlelight. “My favorite surprise was an orange tree full of fruit. Mother Nature’s own ornaments,” she added.

The garden and Conservatory will be closed Christmas Eve and Christmas Day and will reopen on Dec. 26 with a Kwanzaa display that has been featured for at least 10 years. 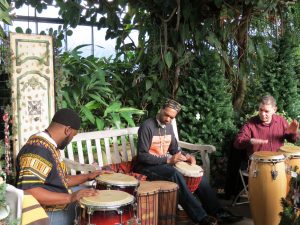 Kwanzaa is a non-religious African holiday that celebrates family, community and culture. Each day of the seven-day celebration is dedicated to one of seven principles: unity, self-determination, collective responsibility, cooperative economics, purpose, creativity and faith. Each night, Kwanzaa celebrants light a new candle on the kinara, a seven-branched candelabra.

“Every culture has a way of celebrating the holidays, and Kwanzaa celebrates African-American culture,” Streitmatter said. “We’ll have a display of African plants, as well as some educational and interpretive materials.”

Some of the 20 plants that will be on display are fruits and vegetables important in African culture, while others are used for making baskets, mats and roofing, he noted.

Local news anchor Garry Moore traditionally does a pop-up drumming event at the Conservatory during Kwanzaa, but Streitmatter said they don’t usually know when that will happen.

“He has to assemble all the members of his drumming group as they come back for the holidays, so it’s hard to schedule. We’ll try to announce it on Facebook that day if we find out when he’s coming,” he said. “It’s really cool, and anyone who gets to experience it comes away with big smiles.”

Streitmatter said the Kwanzaa display is especially important this year given the divisiveness that exists in the country.

“I do think there is a divisiveness in America today, and I think this Kwanzaa exhibit does have a role in introducing another culture to people,” he said. “Without a doubt, any time people take the time to  learn about or immerse themselves in a different culture, it’s always going to be beneficial.”