The Trainsylvania Express is one of the most popular activities at Wildlife Scary Park, which kicks off in Hanna City this weekend. Other activities include a trick-or-treat trail, hayrack rides, games and animals on display. (Photo courtesy of Wildlife Prairie Park)

What began 32 years ago as a small Halloween party for children at Wildlife Prairie Park has turned into a six-day event attended by 15,000 people last year.

“Originally, the Halloween party was just a really small fun thing that (park founders) Mr. and Mrs. Rutherford wanted to do for the community. Kids dressed up in costumes and could ride the train and get some candy,” said Eva Kirschbaum, the park’s membership and marketing coordinator.

The event got a little bigger each year but stalled a bit between 2001 and 2013 when the park was run by the state of Illinois. It has grown substantially since the park became privately owned again four years ago, she added.

General admission tickets are $8 for Wildlife Prairie Park members and $10 for non-members with no cost for children 2 and under. The admission ticket includes a giant trick-or-treat trail, a ride on the Trainsylvania Express train, hayrack rides, games and animals on display, including Big Mike, the park’s domesticated bison.

“We weren’t sure how the Fun Zone was going to go last year, but we had a lot of success with it, so it’s going to be bigger and better this year,” Kirschbaum said. “We created this area for the middle school kid who doesn’t think it’s cool to do the trick-or-treat trail or ride the train with their younger siblings, but there’s no age restriction to get into the Fun Zone.”

“We have pumpkins that you load it into a catapult and you shoot the pumpkin into a field and try to hit one of the targets,” Kirschbaum explained. “We also have a Hall of Horror haunted house that might be scary for kids under 12, so parents are asked to go in with their younger kids.”

The event also will feature face painting, food vendors and a professional pumpkin carver, who will do custom carvings for a fee.

The Trainsylvania Express train is by far the most popular activity at Wildlife Scary Park, Kirschbaum said.

A group of volunteers were dressed to scare at last year’s Wildlife Scary Park in Hanna City. About 500 volunteers are needed to make the event a success, according to Eva Kirschbaum, the park’s membership and marketing coordinator. (Photo courtesy of Wildlife Prairie Park)

For parents with young children or the faint of heart, Wildlife Scary Park is decidedly less scary during daylight hours.

“We ask all volunteers to take off their scary masks and not pop out at people on the train ride before 7 p.m.,” Kirschbaum said. “But after 7 p.m., they wear their masks and pop out and chase the train. Also, just being in the woods in the dark adds to the scare factor.”

Overall, however, the whole event is meant to be kid-friendly. “People worry sometimes that they’re child will have nightmares, but I really do not think that’s the case at all. On a scale of 1 to 10, the most scary it’s ever going to be is maybe a 5,”  Kirschbaum said.

One local mom, Joye Rinkenberger of Pekin, plans to bring her 10-year-old daughter, Lilly, to Wildlife Scary Park for the first time this year.

“Lilly loves scary, but I don’t want to take her where they have gory, gross stuff, so I thought this would be a good alternative,” Rinkenberger said.

Kirschbaum said about 500 volunteers are needed over the six nights to make Wildlife Scary Park a success.

“We couldn’t do it without the volunteers,” she said. “We have many that come back year after year.” 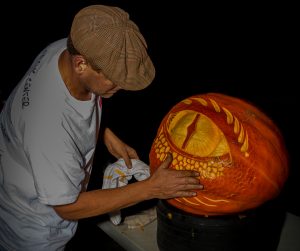 Professional pumpkin carver Jeff Duval works on a custom design at last year’s Wildlife Scary Park. Duval will be carving pumpkins again at this year’s event, which runs this weekend and next weekend at Wildlife Prairie Park in Hanna City, about 10 miles west of Peoria. (Photo courtesy of Wildlife Prairie Park)

Michelle Teheux of Pekin volunteered for the first time last year and plans to help again this year.

“I had taken my children when they were small and had good memories of the event, so last year when they solicited my employer for volunteers, I decided it would be a fun way to get back into Halloween,” Teheux said. “I dressed as a witch and for the early part of the evening I just waved and smiled at the younger children. When it got later, I would hide behind a tree along the train tracks and jump out cackling. I’d usually get a few shrieks. It was really fun.”

Other volunteer jobs include picking up trash, passing out candy, providing directions, working at the ticket gate and helping with parking.

“People can call us to volunteer or we will even take walk-in volunteers,” Kirschbaum said.

This year the park is charging a $5 parking fee for non-members that will go to a non-profit organization and toward maintaining park trails and taking care of the animals.

“The only charitable cause we have confirmed right now is the Peoria Area Mountain Bike Association,” Kirschbaum said. “They’re sending 10 of their members to help with parking on certain nights and then they’ll get a portion of the total collected. We are looking for two more charitable organizations to participate.”

“We encourage people to dress in costume and bring their trick or treat bags,” Kirschbaum said.