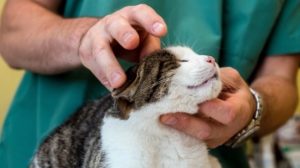 Those concerned as to whether their cat has been exposed to FIV should take their pet in for a quick consultation and blood test administered by a licensed veterinarian. (Photo courtesy of the American Veterinary Association)

A local veterinarian is urging cat owners who occasionally allow their animals to roam to reconsider the practice in light of an alarming number of FIV —or feline auto immunodeficiency virus — cases identified in both domestic and free-ranging cats.

Six of the last 77 mature felines undergoing blood tests at the Animal Care Clinic of Chillicothe have tested positive for the disease over a period of two years. While this number is not alarming at first glance, the age of the animals tested worries Carol Kluka, D.V.M. J.D., who oversees the clinic in downtown Chillicothe.

“Most of the cats tested were older, lower-risk cats, for example, ones suspected of having kidney disease or hyperthyroidism. So the true incidence of FIV, I suspect, is much higher because we are not testing high-risk cats — those cats going outdoors and getting into fights,” Kluka said.

She keeps a city map located in the practice’s greeting area that is dotted with red pins to indicate areas in Chillicothe where FIV-positive animals have been identified, such is her concern.

“I don’t want to call this an epidemic,” she insisted, “but yes, we do have a lot of feline aids. More than I would like to see.”

Kluka recommends complete blood work testing for cats at risk for FIV, which, like its human counterpart, HIV, causes a weakening of the immune system. This makes the animal more prone to upper respiratory infections, ringworm, dental disease and other infections.

“All of these stray cats running around Chilli are a potential risk to (house) cats. People keep reporting they see feral cats, but I don’t know if they are truly feral or just cats that run around outdoors,” Kluka said. “If your cat is attacked by one of these cats, you should get your cat tested. We get a lot of bite wounds on cats and people don’t test.”

Kluka warns that the incubation period for FIV is two to eight weeks after exposure, meaning a blood test immediately following an attack would reveal nothing. The most common screening test for FIV is an ELISA (or SNAP) test administered by a veterinarian.

The best way to reduce your house cat’s risk of exposure is by cutting off its access to extended, unsupervised outdoor visits, she advises.

“Keep them inside and limit their exposure to other cats, because it is bite wounds that cause the most cases of FIV. Cats living in households with stable social structures and no incidents of fighting are at low risk of transmission,” said Kluka.

Though the most common route of infection is a deep bite wound from an FIV-positive cat to another, it can also be transmitted through blood, in utero and from the milk of an infected mother cat.

“It is very rare for cats to get FIV just from being around infected cats, sharing food bowls, or from a person touching an FIV-positive cat and then touching an FIV-negative cat,” according to the animal welfare website Best Friends. “Many FIV-positive cats and FIV-negative cats live together in the same home for years without spreading the virus to the non-infected cats.”

This is confirmed by Becky Spencer, shelter services coordinator for Peoria County Animal Protection (PCAP), who said the Peoria Animal Welfare Society has recently begun adopting out family-friendly FIV-positive cats, under special conditions. “I don’t know that the surge in Chillicothe is really that explosive,” she said. “More rural areas, like Chillicothe, provide more opportunities for cats to roam outdoors as well as live indoors. There is less opportunity for the spread of the disease in the city, but we still see our share.”

Spencer noted that the disease is usually transferred through fighting resultant of mating behavior. Spaying or neutering your animal will greatly lessen the chances of your animal engaging in fighting, while also reducing its overall wanderlust.

In some areas, a stray cat picked up by local animal control that tests positive for FIV may be destroyed. In Peoria County, PCAP and PAWS are now making available for adoption a pair of “gorgeous” FIV-positive cats at their 2600 NE Perry Avenue in Peoria location, according to Spencer.

“Feline FIV is not always a death sentence,” she explained. “We can neuter these cats and, in some cases, place them in homes with non FIV-positive cats. This disease is not a cause for concerns at shelters in terms of risk of transmission, like with cases of feline leukemia or other diseases.”

Whether the surge in FIV-positive felines, most of them older, documented in Chillicothe constitutes an alarming number of cases is up for conjecture. Depending on where one lives, the rate of FIV-positive cats present in a typical community ranges from four to 24 percent, according to Best Friends.

The American Association of Feline Breeders recommends against euthanizing FIV-positive cats or even spending funds to test for FIV.

Spaying and neutering cats seems to control the transmission of FIV, the association claims, as such cats are less likely to engage in fighting behavior.

For those concerned as to whether their cat has been exposed to FIV, a quick consultation and blood test administered by a licensed veterinarian can provide answers, often within minutes. Early detection will help to maintain a cat’s health and help reduce the spread of the infection. With proper care, FIV-positive cats can live long and enjoyable lives, experts agree.