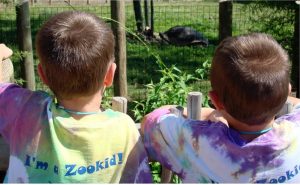 Kids enrolled in the Peoria Zoo’s summer camp look at a turtle. Zoo Camp integrates elements of science, technology, engineering, art and math to explore the word of animals. (Photos courtesy of the Peoria Zoo)

Jen Hopkins of Champaign hopes Peorians don’t take the Peoria Zoo for granted in their own backyard.

“My eight-year-old daughter and I make the 1 1/2-hour drive at least once a year, specifically so my daughter, Mackenzie, can feed the giraffes,” Hopkins said in a recent email interview after leaving a positive review on the zoo’s Facebook page.

“The staff is always informative and happy to answer any questions we may have about the animals, as well as amazingly kind and thoughtful,” she added. “This year I was taking my daughter’s picture beneath the Africa archway, and an employee ran out from the cafe and asked if I would like him to take a picture of the two of us. It’s simple unrequested gestures like that that make our visits well worth the trip.”

Owned and operated by the Peoria Park District, the Peoria Zoo is open year-round, closing only on the major winter holidays.

“Really, a zoo our size in a community our size is surprising,” said Yvonne Strode, who’s been the zoo’s director since 2005.

The zoo has a long history dating back to the late 1800s when a herd of elk was donated to the park district. Many years later, the park district wanted to develop a more formal collection and sought advice from Marlin Perkins, who was at the time director of the St. Louis Zoo and later starred in the Mutual of Omaha’s Wild Kingdom, according to the zoo’s website.

“I think most people just think of the zoo as always being in our current location (in Glen Oak Park), which opened in 1955,” Stode said.

Previously named the Glen Oak Zoo, the facility has undergone various changes over the years, with the most dramatic being the opening of the popular Africa exhibit in 2009 after completion of a successful capital campaign.

The zoo features lions, tigers and giraffes, among many other unique animals from around the world in its main exhibits highlighting Africa, the Asian Trail, an Australian Walk-About, Tropics Building, Conservation Center and Contact Barn.

“Certainly, Africa has been very popular since we brought it in,” Strode said. “At first, I think it was the rhinoceros that was the big hit, but since we’ve had baby giraffes, I think they’ve taken over that role of being a favorite.”

Lions, which have been part of the zoo for a long time, are also popular with visitors, and people love the meerkats, as well. “You can get real close to the meerkats and they interact with the kids, so people love them,” Strode said.

Last year the zoo recorded about 140,000 visitors. A few years ago, the zoo asked people to sign a guest book one day to gauge how far visitors were traveling to the zoo. Of the 500 or so who signed, 14 percent were from out of state and 47 Illinois counties were represented, Strode said.

While the zoo is open year-round, Strode admitted, “We’re kind of lonely here in the winter. Most of our attendance is from May through September.” 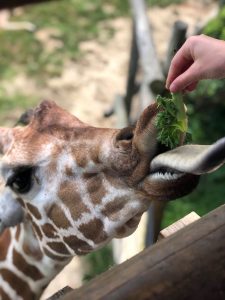 A giraffe at the Peoria Zoo enjoys a green snack. Visitors can see giraffes eye-to-eye in the zoo’s Africa exhibit. Located at 2320 N. Prospect Road in Peoria, the zoo is open from 10 a.m. to 5 p.m. daily year-round, only closing on major winter holiday. (Photo courtesy of Jen Hopkins)

However, she added, “We do encourage people to come in the winter, especially if you’re a member, because you’re not paying every time you come in. It’s lovely here when there’s fresh snow and the tigers are out bounding in the snow.”

The zoo currently has more than 2,500 member households. It employs up to 70 people in the summer and drops to about 40 employees in the winter.

New at the zoo this year is a baby Thomson Gazelle named Dixie that was born May 1 to zoo residents Johnnie and June. “We’ve never had one born here before,” Strode said. “She’s a little cutie out in the yard.”

About 180 kids are signed up to attend this summer’s Zoo Camp. “The children who come in are interested to begin with, but the camp gives us time to make them into lifelong animal lovers and nature lovers,” Strode said. “They’re going to be the ones conserving our resources in the future.”

The zoo also offers adults-only nights for those who want to experience the zoo without the younger generation. “It’s a different experience at the zoo when you don’t have your kids here,” Strode said.

Special events like these serve to both raise money for the zoo and to raise awareness. “It’s not cheap to run the zoo,” Strode said. “Our yearly budget is a little over $2.8 million.”

Visiting a zoo helps people learn about animals and the ways humans can help conserve nature. “The next time you want to throw away a plastic straw, you might think about the turtle that might ingest part of that and die,” Strode noted.

The zoo is also available to rent for events such as weddings and birthday parties. “It’s a unique venue,” Strode said. “A lot of people  get married over at Luthy Botanical Garden, which is right next door, and their guests can walk over to the zoo for their reception.”

Looking to the future, Strode said the Zoological Society will be talking about launching a capital campaign for projects that may include expanding the tiger exhibit, updating the Tropics Building and creating a plaza just past the ticket booth where people can sit and look at a map to plan their visit.