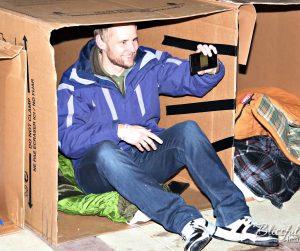 Jay Scholl took a selfie while preparing to sleep outside in a cardboard box during last year’s Gimme Shelter event to raise funds and awareness to combat homelessness. “The whole premise is we ask people to try to raise $1,000 each for the privilege of sleeping outside on a very cold night in January,” said Kristen Berchtold, development director for the South Side Office of Concern. (photo courtesy of Jenni Williams/Blissful Images)

About 50 volunteers are signed up to willingly sleep in cardboard boxes outside the Peoria Civic Center Friday, Jan. 19, in what has so far been a bitterly cold winter.

The participants are raising both funds and awareness to combat homelessness through the second annual Gimme Shelter: A Night to End Homelessness event sponsored by the South Side Office of Concern.

“The whole premise is we ask people to try to raise $1,000 each for the privilege of sleeping outside on a very cold night in January,” said Kristen Berchtold, the SSOC’s development director.

The SSOC, which focuses on placing people in permanent housing with supportive services, raised $67,000 in last year’s inaugural event and has upped its goal to $100,000 this year. Volunteers are still welcome to join the event.

“The sooner people sign up, the better, but last year we took people all the way up to the day before,” Berchtold said.

The public is also welcome to donate at the event, online at www.ssocpeoria.org/special-events/gimme-shelter or by texting “gimmeshelter” to 50155. 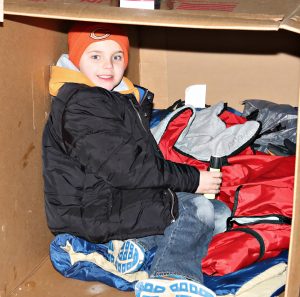 Louie Nowlan bundled up in a cardboard box outside the Peoria Civic Center during last year’s Gimme Shelter event sponsored by the South Side Office of Concern to raise funds and awareness to combat homelessness. All ages are welcome to participate in this year’s event Jan. 19 but children must be accompanied by an adult. (photo courtesy of Jenni Williams/Blissful Images)

At-Large Peoria City Councilman Zach Oyler will be participating again this year. As a council candidate last year, he said he saw the event as an opportunity to understand the challenges of some of the people he’d be working for if elected.

“We all come from different walks of life and bring different experiences to the table, and until we have spent some time in the shoes of others, it is very difficult to understand their challenges,” Oyler said. “I am participating again to continue to raise resources and awareness for those less fortunate in our community.”

According to an SSOC brochure, a point-in-time count last January identified 329 homeless individuals in Peoria, Tazewell, Woodford and Fulton counties. In addition, 1,848 homeless children were enrolled in school in those counties during the last school year.

“We expect those kids to go to school and learn and grow, but how can they do that if they aren’t even certain where they’re going to be sleeping that night?” Berchtold said. She noted that the school district definition of homelessness includes any child who does not have a family home, meaning the child could be sleeping at a friend or relative’s house and not necessarily in a shelter or on the street.

Oyler said last year’s Gimme Shelter event was insightful. “It was an incredibly eye-opening experience to be downtown, out in the open, when the city goes dark and quiet. To sit there in the frigid temps alone without the resources one needs to care for themselves.”

Oyler recalled that a homeless man walked up to the group last year and asked what they were doing. “After hearing about it, he said, ‘This is great, but we don’t even have boxes to sleep in or blankets like you guys do.’ When it gets the coldest, they find the steam vents in sidewalks from some of the businesses and try to get a little warmth there. That really struck me.”

Berchtold acknowledged that the Gimme Shelter experience doesn’t completely compare to true homelessness because the participants are given clean, dry appliance-sized boxes and are encouraged to bring cots, sleeping bags, tarps and warm blankets from home. Space heaters or stoves aren’t allowed due to Civic Center regulations. 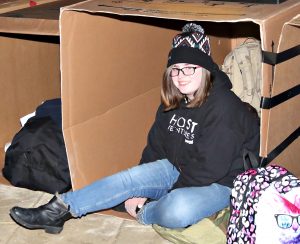 Emilee Filley, a participant in last year’s inaugural Gimme Shelter event to combat homelessness, settled into a cardboard box for the night outside the Peoria Civic Center. The South Side Office of Concern is sponsoring the fundraising and awareness event again this year on Friday, Jan. 19. (photo courtesy of Jenni Williams/Blissful Images)

“For the volunteers who are spending the night outside, the Civic Center will be open all  evening. We’ll have a hospitality room with coffee and snacks and movies, and they can come in and warm up and have access to indoor restrooms. We’re also having pizza delivered at 11 p.m.,” Berchtold said.

“So it’s not completely a homeless experience. There’s kind of a fine line between making it real and keeping it fun so people want to participate. They get a little bit of the experience, but you don’t want it so miserable that no one wants to do it,” she added.

The participants will be set up in side-by-side boxes on a patio along the Fulton Street side of the Peoria Civic Center. The public is invited to attend a free series of educational sessions in Civic Center meeting rooms 135 and 136 beginning with an interactive homelessness experience at 7 p.m.

Other topics will be “Homelessness and the Community Needs Assessment” at 7:30, “Homeless Continuum of Care & Coordinated Entry” at 7:50 p.m. and  “Ending Homelessness: Outreach and Housing Solutions” at 8:10 p.m. A screening of the award-winning documentary film “Storied Streets” will begin at 8:30 p.m.

“There are a lot of things that contribute to homelessness,” Berchtold said. “The biggest one is just a lack of affordable housing. If you look at the fair market value of rent in our community and if you’re working a minimum-wage job, you have to work an ungodly number of hours to be able to afford a very basic apartment.”

While the guideline is to spend not more than 30 percent of one’s income for housing-related expenses, including rent and utilities, many Peoria-area families are spending up to 80 percent of their income on housing. “Basically, they are one car accident, family illness or unfortunate life event away from homelessness,” Berchtold said.

Other contributing factors to homelessness include mental illness and substance abuse.

“Our whole model is let’s get people off the streets, let’s put them in permanent homes and then let’s help them stay there by addressing whatever issues they have, which is much more effective than requiring that people fix all their problems before you give them housing,” Berchtold added.

Money raised from the event will go toward continuing to provide permanent supportive housing and toward homeless outreach efforts.

For more information, visit the SSOC website at www.ssocpeoria.org.

—What is it like to be homeless? Volunteers get a taste of life on the streets as part of fundraiser–