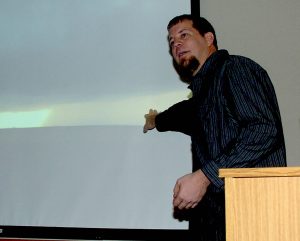 Adam Lucio, co-founder of Illinois Storm Chasers, talks about how tornadoes are formed during a recent presentation at the Alpha Park Library in Bartonville. Lucio has documented more than 120 tornadoes in the past 13 years. (Photo by Elise Zwicky / for Chronicle Media)

Most people run for cover when a tornado threatens, but Adam Lucio runs toward the storm.

About 25 people turned out at the Alpha Park Library in Bartonville recently to learn about weather from the storm chaser whose passion is “not only to see the storm but to experience the storm.”

“I love the adventure. I love being able to provide a service to people while fulfilling a passion,” said Lucio, co-founder of Illinois Storm Chasers, which provides weather information and forecasts on its Facebook page and website.

Lucio started the Chicago-based Illinois Storm Chasers in 2014 with friend Danny Neal, and the group currently has more than 209,000 likes on its Facebook page.

“We have radar tracking software, forecasting model sites, live GPS tracking, live satellite feeds, live data feeds and a whole array of tools we use for forecasting,” said Lucio, who started chasing storms in 1998 at the age of 16.

“I’ve always loved thunderstorms. As a kid I thought they were the coolest thing ever. So I got my driver’s license and started driving around in the rain, thinking I was cool and I knew what I was doing. It turns out that’s actually pretty stupid,” he said.

Lucio took storm spotter training with the National Weather Service in 2002 and went on his first “real” storm chase on April 20, 2004, when an EF-3 tornado hit Utica, Ill., killing eight people. He’s documented more than 120 twisters since then, including the  EF-4 tornado that hit Washington on Nov. 17, 2013. An EF-2 tornado hit Pekin and East Peoria that same day. 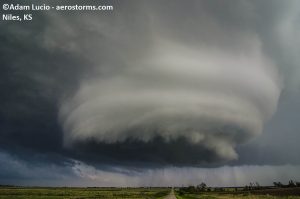 Storm chaser Adam Lucio shot this photo of a supercell in Niles, Kan. A supercell is a rare kind of thunderstorm that is potentially the most violent, bringing the threat of baseball-sized hail, damaging winds and tornadoes. (Photo courtesy of Adam Lucio/Illinois Storm Chasers)

“April, May and June is our peak tornado season, but we see tornadoes year-round in Illinois,” Lucio said. “I think June would be our most active month based on trends in recent years.”

In a quick lesson on why tornadoes happen more in the spring, Lucio explained that tornadoes are born from the collision of cold and warm air.

“In the spring, warm air is trying to advance and that creates a battle zone. Winter wants to stay, summer wants to visit and they’re fighting for dominance,” Lucio said. “Eventually, summer’s going to win out, but during that chaotic battle period known as spring we can get these violent tornadoes.”

Lucio said Illinois typically places between fourth and sixth in the nation in terms of tornadoes annually.

“We had more tornadoes than any state in the country in 2013, but we were 10th in 2014. In 2017 so far we’re in third place behind Georgia and Missouri,” he said. “There have been 36 tornadoes so far this year in Illinois, primarily due to the outbreak on Feb. 28. By all accounts this has been an unusual year, and something tells me we’re going to make a run at the top slot this year.” 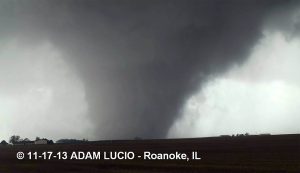 From a vantage point near Roanoke, storm chaser Adam Lucio shot this photo of the EF-4 tornado that devastated Washington on Nov. 17, 2013. A tornado also hit Pekin and East Peoria that day. (Photo courtesy of Adam Lucio/Illinois Storm Chasers)

Lucio shared video footage he’s shot of tornadoes in Illinois, Oklahoma and Nebraska, among other places. In one video, he’s seen driving backward to escape an approaching tornado after hail destroyed his back window.

“I’ve gone through seven windshields, front and back,” he said, adding that his truck is a “rolling golf ball” pockmarked with hail damage.

While his passion is chasing storms, Lucio said he likes to give public presentations to help people better understand the weather and weather forecasting.

“A lot of the general public doesn’t quite understand how to interpret a forecast, and that leads to a perception that forecasts are always wrong,” he said in an interview before his talk in Bartonville. “So we’re trying to bridge that gap and teach people how to get the information and how to interpret that information.” 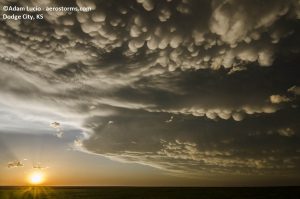 As an example, Lucio said when people hear there’s a 30 percent chance of thunderstorms, they don’t realize the meteorologist is forecasting thunderstorms over 30 percent of the coverage area.  He stressed the importance of seeking out the latest weather information because the forecast models are constantly changing.

Lucio currently works for a decking company when he’s not chasing storms, but he’s working on producing a storm chasing TV show through a new platform called Jive Wire.

“It’s original programming for streaming, and they literally just launched, so they’re getting their content ready,” he said.

While tornadoes are a top priority for Illinois Storm Chasers, Lucio said he’s fascinated by all forms of weather, including blizzards and hurricanes.

“I will go anywhere I need to. I’ve been to North Dakota, Wyoming, Texas, Alabama, Mississippi. I haven’t done a hurricane yet, but it’s definitely on the list, especially with this TV show adventure,” he said.