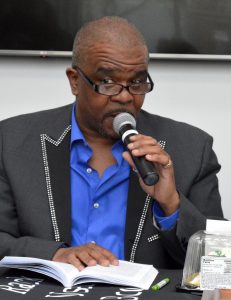 Richard Pryor, Jr., inherited more than just his name from his famous father, the late groundbreaking stand-up comedian and actor.

Like his dad, the younger Pryor grew up in Peoria around prostitution and experienced abuse and alcohol and drug addiction, according to his new memoir, “In a Pryor Life.” Pryor  returned to his hometown recently to discuss the book, which he calls “a real-life story of overcoming obstacles, surviving and thriving.”

An actor, singer and now author, the 58-year-old Pryor read excerpts from his book and signed copies for a crowd that gathered at the Bradley University Michel Student Center Atrium.

“The book started out as just telling my story, but it became a way to try to help other people,” Pryor said. “I wanted people to see that no matter what type of darkness you’re in, you can come out of it.”

Pryor said he knew his father was doing drugs when he was growing up, but he had always sworn he never would.

“I said, ‘Guess what I’m doing? I’m shooting cocaine in my arms. I wanted to hear him yell and be upset, but he was extremely calm. And I was even more upset because I didn’t get the reaction I wanted. I realized later that he was probably high at the same time,” he said.

Pryor read an excerpt from the book about a time he ran away because he was feeling unloved by his mother’s penchant for calling him “Lionel,” the name of her hairdresser, whenever she thought he was being dramatic.

“I got as far as my grandma Marie’s station wagon, which was parked in the street.

It was unlocked. I went inside and locked all the doors. Nobody came to look for me. The longer I sat there, the sadder and more miserable I became. Don’t nobody love me. Don’t nobody care,” Pryor read. 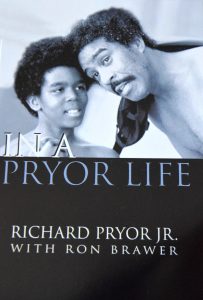 “In a Pryor Life” by Richard Pryor, Jr., with co-author Ron Brawer can be purchased on Amazon or at Book Rack Used Books in Peoria. Pryor said he and Brawer are working on adapting the book into a screenplay, and he’s working on creating a one-man show in which he’ll portray all the characters from the book. (Photo by Elise Zwicky / for Chronicle Media)

When he returned home about an hour later, his mother, Patricia Price, told him to go wash his hands for dinner.  “After that mom stopped calling me Lionel, and I started to walk with a more manly stride,” he said.

According to his website, www.inapryorlife.com, Pryor left Peoria after graduating from high school in 1980 and worked for a year as an extra on his father’s films and productions before joining the Navy. He moved back to Peoria in 1983 and became involved in female-impersonation shows.

Pryor told the crowd it wasn’t until his mother died in 2003 and his father in 2005 that he decided to relaunch his career by moving to New York.

“People aren’t going to understand this, but when my mother passed away, her death gave me life,” Pryor said. “If my mother was still alive I would still be in Peoria, hanging around her because I was a mama’s boy. Her passing gave me the courage to step out and finally be what I wanted to be.”

He was asked to do stand-up comedy at The Improv in New York City, where a room is named for his father, but he chose to sing “His Eye is on the Sparrow” instead.

“The response was overwhelming. When they appreciated my voice, that created confidence in me that I didn’t have when I was in Peoria,” he said.

Pryor treated the crowd at Bradley to an a capella rendition of “Nobody Loves You When You’re Down and Out,” a song his father can be found singing on a YouTube video. “A lot of people didn’t know my father could sing,” he said.

In response to questions from the audience, Pryor said he never considered leaving out parts of his struggle while writing the book but admitted that reliving it during the writing process sometimes made him physically ill.

Pryor got momentarily choked up when he spotted some family members in the audience, including a sister, aunts, an uncle and a cousin.

“My family helped me write this book, because all of them were a part of my life and all the things I’ve gone through. The good, the bad and the ugly. The grit, the glitter and the gutter,” he said. 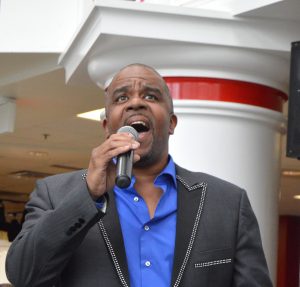 Richard Pryor, Jr., not only talked about and read from his new memoir, “In a Pryor Life,” at a recent event at Bradley University, he also broke out into song, performing an a capella rendition of “Nobody Loves You When You’re Down and Out.” (Photo by Elise Zwicky / for Chronicle Media)

Pryor also was amazed to see one of his junior high teachers. Retired teacher Peggy Schoenheider said afterward that Pryor was a fun student. “He was very smart, but he didn’t really want to show that to people. He did entertain the other students,” she said.

Schoenheider said Pryor’s comments during the talk were compelling. “I had known a little bit about what his life was like when he was in junior high, but obviously some things got much worse as he got older and moved away. It kind of made me very sad actually. As a teacher you don’t ever want your students to go down that road. I think it’s wonderful that he wrote that book and he can help people realize that you can get away from that,” she said.

Pryor and his co-author, Ron Brawer, are working on adapting the book into a screenplay. He’s also working on creating a one-man show in which he’ll portray all the characters from the book.

“In a Pryor Life” is available on Amazon or at Book Rack Used Books in Peoria, which organized and sponsored Pryor’s visit. Book Rack owner Stacy Hardin said a book club at the store will focus on Pryor’s book, likely in May.