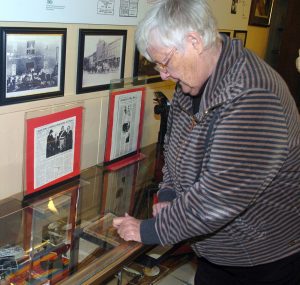 Dianne Colwell, past president of the Chillicothe Historical Society, looks over part of the CHS Museum’s extensive exhibit of Johnston McCulley memorabilia and artifacts. A 1901 graduate of Chillicothe High School, McCulley created Zorro and 14 other masked superhero characters. (Photo by Elise Zwicky)

Despite growing up in Chillicothe and being involved with the town’s historical society, Dianne Colwell—like many others—was shocked to learn that the man who created Zorro hailed from her small river town in Peoria County.

“I never knew he was from here until I read about it in an article in the Chillicothe Bulletin in 1998,” Colwell said of Johnston McCulley, the creator of 15 masked superhero characters that set the mold for today’s superheroes. “I thought then that if no one else does something to let people know about him, then maybe someday I will.”

Fifteen years went by before that “someday” resulted in an extensive McCulley exhibit at the Chillicothe Historical Society’s museum and Colwell is still looking for ways to honor the 1901 Chillicothe High School graduate, who wrote hundreds of published stories and 10 movie scripts.

Colwell and the CHS are mulling over ideas for a celebration next year of the 100th anniversary of the publication of McCulley’s story “The Curse of the Capistrano,” which first appeared as a five-part serial in the “All Story Weekly” magazine in 1919.

The story later caught the attention of actor Douglas Fairbanks, Sr., who bought the movie rights and commissioned McCulley to write the screenplay for “The Mark of Zorro.”

The CHS will also be sponsoring its fourth annual Zorro Fest parade this summer as part of the town’s Claud-Elen Days. The parade is a slimmed-down version of the first Zorro Fest the society hosted in 2015 that featured a parade with mythical heroes of film and comics as well as real-life military heroes, a costume contest and demonstrations by the Peoria Fencing Academy.

“It was nicely attended, but it wasn’t a knock-down-can’t-get-in-the room-event,” recalled Gary Fyke, a former mayor and past CHS president.

Colwell said the event was held at a park on the riverfront far from the city park where the rest of the Claud-Elen Days events take place, so the society has just done the Zorro Fest parade in subsequent years.

“In 2019 more people will be needed to help promote the 100-year celebration of Zorro first appearing on the scene,” Colwell said. “Zorro used cleverness and agile physical ability to outwit the bad guys without superpowers. Just think of all the fictional caped heroes that followed with unrealistic superpowers.”

Fyke is currently working on a book on McCulley that he hopes to have published by next year. The retired police officer has been researching the book for about two years and said it will chronicle McCulley’s early years in Chillicothe, where he was called “Little Willie” and was raised by his grandparents. 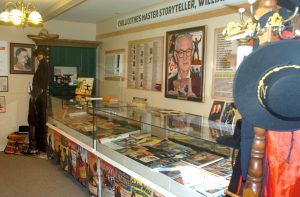 An extensive collection of Zorro creator Johnston McCulley’s life and works has been on display at the Chillicothe Historical Society’s museum since 2013. Located at 723 N. Fourth St., the museum is open from 1 to 4 p.m. Wednesdays and on the first Sunday of each month. Admission is free but donations are encouraged. (Photo by Elise Zwicky)

“His grandparents owned a grocery store down on Second Street. In his senior year of high school he won a literary essay contest in his class, which sounds great but there were only two other boys and two girls in his class,” Fyke said with a chuckle.

“However, the Chillicothe Bulletin at the time predicted he was going to do great things,” Colwell chimed in.

After graduating high school, McCulley worked as a newspaper reporter in Peoria and had success selling short stories to the popular pulp magazines of the day before moving with his new bride and grandparents to Portland, Ore., a few years after graduation,

Fyke said. He hinted at a tawdry tale in which McCulley came back to Chillicothe and then allegedly disappeared with a buxom salesgirl, saying it will all be covered in his book.

McCulley eventually settled in Colorado Springs. “We don’t think he ever came back to Chillicothe after that. If he did, we haven’t found it,” Fyke said.

The Zorro exhibit fills a space that doubles as a meeting room at the CHS Museum. Opened in June 2013, the museum features a portrait of McCulley, a timeline of his life and accomplishments, examples of his work, posters and myriad memorabilia.

The extensiveness of the exhibit is thanks in part to the serendipitous visit to Chillicothe of a man who claims to be the world’s largest collector of Zorro and Johnston McCulley artifacts.

Colwell had contacted Zorro Productions, which controls the Zorro trademarks and copyrights, about possibly borrowing something to feature at the museum and was advised to search for items on eBay. A small committee of CHS members was working on that and researching McCulley when a stranger stopped in to Richard Popp’s Waxwing Books in the old Chillicothe Library building and started asking about Johnston McCulley and Zorro.

“That man was Pete Poplaski. and a lot of the stuff in our collection is his,” Fyke said. “We’re basically his storage room.”

Poplaski is an American cartoonist, painter and author who splits his time between Wisconsin and Europe. He attended the first Zorro Fest in 2015, and Colwell hopes to entice him back for the 100th year celebration in 2019.

Poplaski was impressed with a dog-eared hardcover book, “The Mark of Zorro,” that the CHS had managed to buy for $15 on eBay. “He picked it up and said, ‘Holy crap, this is a first-edition,’ ” Fyke said, laughing. “He said it’s worth about $475, so we just lucked out there.”

Colwell and Fyke said the museum does still get visitors curious about the exhibit. Admission is free but donations are encouraged.

“I belong to some Zorro groups on Facebook, and I’m trying to get some of them to come here for an event next year,” Colwell said. “With the right event, I think we can have a nice celebration. I’m pondering some things so I can make a presentation to the board. I’m kind of excited about it.”

The CHS museum is open from 1 to 4 p.m. Wednesdays and on the first Sundays of the month or by appointment.