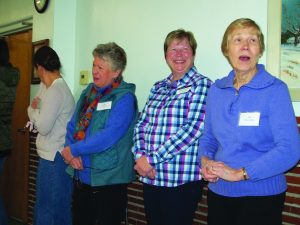 Some of the 18 women enrolled in the six-seminar series enjoy a laugh with Annie’s Project coordinator Christine Belless (second from right). (Photo by Tim Alexander/for Chronicle Media)

The women attending the first of six scheduled “Annie’s Project– Empowering Women in Agriculture” sessions in Peoria were representative of the demographics of a typical Annie’s Project group, according to founder Ruth Hambleton.

They were either long-married to their farmer or just starting to date their farmer. They were from urban or strictly rural backgrounds. They were in their 20s and they were nearing their golden years. They farmed around 500 acres or they had never farmed. The range of contrasts among the group could have been measured in acreage.

“How many of you in this room know each other?” asked Hambleton, a retired University of Illinois Extension professional, early in her initial presentation at the Peoria County Farm Bureau auditorium the morning of March 6. Answered mostly with shrugs, she continued: “Well, give it three weeks and that will change.”

Annie’s Project, which began in 2003 at Kaskaskia College with 10 farm women, is designed to draw women together to develop their management and decision-making skills in the dynamic, complex world of agriculture.

The diverse group of women gathered in Peoria that morning each came to the class with their own goals and quest for particular knowledge, but each will come away with a basic primer in communications, financials, succession estate planning, farmland leasing, loan application preparation, crop insurance, the commodity markets and government agencies critical to farming.

“I came because I really want to gain a better understanding of the markets,” said Christina Grove of Mapleton, a self-professed “city girl” who farms around 40 acres with her husband. “I have trouble with the futures markets, and it is something I need to learn more about. I manage the farm, but I need a better understanding of farming. I also see a potential for doing more with it.”

Another attendee, Joy Schwarting, enrolled in Annie’s Project because her husband had just become co-owner of the family farm in Allentown. “I am here to learn more about farm record-keeping and other aspects of the farm so that I can become more involved in the operation,” she said.

Others had inherited farmland or purchased it on the market and came to learn how to better utilize the asset. “We have a land trust,” said 79-year-old Carol Schmidt of Morton, who battled pressure from a family member to sell some of her farmland after the passing of her husband. “I am here because I used to be the gopher on the farm, but now I am responsible for it. I am here to learn a lot, and I only have a few years to do it.”

Some, like Tina Christ, who had done books for her and her husband’s farm for 38 years, came to glean information about managing day-to-day farm operations and estate succession.

No matter what knowledge they sought, many of the women came with the same initial question: who was Annie?

Fleck was a farm woman who grew up in a small town in northern Illinois who spent her adult life learning how to be an involved business partner with her farm husband, whom she married in 1947.

She made it her mission to acquaint herself with all facets of the farm’s operations while facing three generations living under the same roof, low profitability, changes in farm regulations and raising four children.

At times, Fleck faced pressure from family members, forcing her to make many painful sacrifices and hard choices. Over the years, she became the overseer of the family farm operation, using her diligent record-keeping skills to ferret out unprofitable endeavors in favor of more lucrative ones. 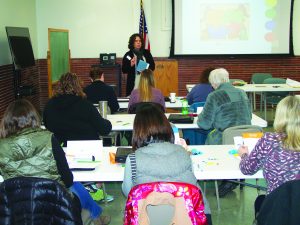 Judy Schmidt (standing), an educator with the University of Illinois Extension, leads a team-building exercise during an Annie’s Project meeting in Peoria on March 5. (Photo by Tim Alexander/for Chronicle Media)

When old age and advances in farm machinery came, Fleck and her farmer made the choice to become landowners renting to other farmers. She continued to pay expenses, while marketing the corn and soybeans grown on the land.

Fleck passed away in 1997, a wealthy woman who did things her way and inspired those who knew her for a half-century.

Fleck’s determination, spirit and legacy lives on through the shared experiences of the women who attend Annie’s Project sessions like the ones in Peoria.

During her introduction, Hambleton promised the ladies that Annie’s Project would provide them with a “safe harbor” in which to get connected and share their discoveries through interactive, dynamic learning using current, research-based information.

“Women who attend an Annie’s Project course are equally benefited, regardless of societal or economic background. We don’t care of you are poor or rich, if you can’t communicate or are a public speaker, you will equally benefit,” said Hambleton.

Getting started, Hambleton warned the women that financial debt is the most formidable opponent of a farm operation and a farm family. Debt, she said, can lead to other “dangerous d’s,” such as disillusionment, divorce and death. Arming women with the knowledge of which financial and government entities are available to help farm families plan and manage debt, such as the USDA Farm Service Agency (FSA), is a particular focus of the Annie’s Project curriculum, she said.

Hambleton of Frankfort closed her initial address to the ladies by sharing recollections of her mother, who herself was a young farm wife managing financial challenges and family matters in the shadow of the Great Depression and World War I.

“She grew up in town but knew she always wanted to be a farmer. But as a girl born in 1922, the only way to be a farmer was to marry one or inherit it. She ended up being very active on the farm, with chickens, turkeys and dairy. We were poor, but I never knew it. My parents managed well and eventually purchased farmland, and I am now the manager of the family trust,” said Hambleton. “Twenty years ago, if you told me I would be doing this I would have said ‘yeah, right.’ It happens, folks.”

Annie’s Project is reflective of the changing “agscape” of America in that it represents a growing minority presence in farming: women. 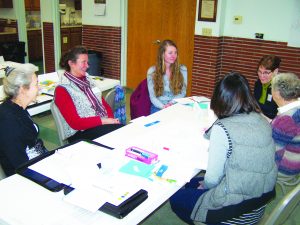 According to the 2012 USDA Agricultural Census, women were acknowledged as accounting for 14 percent — or 288,264 out of 2.1 million — of total American farm principal operators (POs). In Illinois, 6,891 women were farm POs, managing 843,000 acres of farmland.

The results of USDA’s 2017 ag survey will be issued in April 2019, when the number of women recognized as filing their tax forms under the occupation “farmer” will likely increase, according to Hambleton.

This Annie’s Project group will continue to meet on Tuesdays and Thursdays through March 21, with each session running from 9 a.m. until noon at the Peoria County Farm Bureau, 1716 N. University St.  in Peoria. Upon graduation, the women will be issued a “diploma” that acknowledges completion of their training. They will also likely have forged friendships and mutual interests that will continue to bond them for a lifetime.