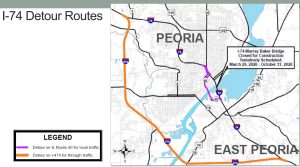 Detours that have been set up for drivers in the region while the Murray Baker Bridge is under construction for the next seven to eight months. The construction will require rerouting about 72,500 vehicles that pass over the bridge daily. (Map courtesy of IDOT)

Of the countless Open signs that the coronavirus has turned to Closed, there’s one that can’t be pinned on the pandemic. On March 29, Peoria’s most traversed bridge closed, on schedule, for a massive reconstruction project.

Built in 1958, the Murray Baker Bridge is a landmark cantilever bridge that last saw major reconstruction work in 2005, during the multi-year Upgrade 74 Illinois Department of Transportation project. Along with new truss panels, the bridge’s span was shortened, then, from its original 3,216 to 3,036 feet.

This time around, to the tune of $42 million, all the decking will be replaced, along with all roadway and decorative lighting. Scour countermeasures will be installed to prevent erosion and structural steel will be repaired and repainted.

Total closure was the best option, according to Nick Volk, a construction field engineer for IDOT.

“With all the work we have to do, we estimated it would take two full construction seasons, or two years to complete,” Volk said. “The decision was made that we could get a better product faster and a lot safer for the workers and the motoring public … but it did involve a full closure.”

Around 68,000 passenger vehicles and an additional 4,500 heavy trucks passed over the Murray Baker Bridge every day, according to 2018 data. Rerouting this density of traffic will likely strain other thoroughfares, a necessary evil in light of the goal, which will not only improve the bridge, but will also provide much-needed jobs to those in labor trades.

Those workers will be cautioned to reduce the spread of COVID-19, the disease caused by the coronavirus, such as not sharing tools, remaining six feet apart and properly swapping out work clothes. IDOT also plans to limit the number of workers who are assigned to certain jobs.

“Some examples of the measures being taken are to avoid sharing tools, utilizing disposable hand towels and no-touch trash receptacles,” IDOT public information officer Paul Wappel said. “Workers are instructed to change work clothes before or immediately after arriving home, and to wash clothes in hot water and laundry sanitizer.” 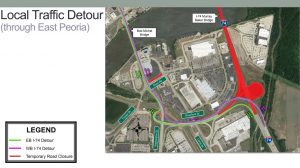 The detours for local drivers while the Murray Baker Bridge is under construction for the next seven to eight months. (Map courtesy of IDOT)

In the weeks preceding the closure, Volk said IDOT workers installed additional traffic signals along detour areas and realigned lanes to reroute traffic. The eastbound exit to Washington Street in Peoria at the foot of the bridge will remain open, allowing access to major employers, such as Caterpillar, as well as riverfront events.

Regardless of detours and navigation changes, Volk said he hopes drivers will take alternative routes, particularly Interstate 474 over the Bob Michel Bridge, and other arterial roads rather than congest the downtown areas of Peoria and East Peoria.

“We really hope that all through traffic will take I-474,” he said. “It just makes total sense. There’s no construction on it, it’s a wide-open interstate.”

Alternatively, those driving east of the Murray Baker Bridge may want to take Illinois Route 116 to U.S. 150 and the McClugage Bridge, which will not be permitted to have lane closures until work up the river is complete.

Work that began on the McClugage Bridge will be paused until 2022, when its eastbound span will be demolished and replaced. The Cedar Street Bridge in Peoria and the McNaughton Bridge in Pekin will also remain open.

Work on the Murray Baker Bridge is expected to be complete by Oct. 31, and, when finished, there will be a much-anticipated improvement. Since around 2012, the lights that once dotted the bridge’s contours have been dark. IDOT budgeted $3.2 million of the projects funds to pay for new lighting.