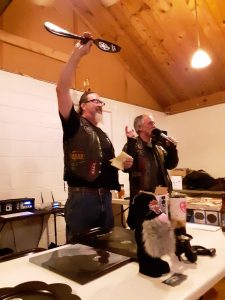 It was a ragtag, leather-clad group who were horsing around and making harmless jabs at each other. Mac “Mac Daddy” Clements emceed, and offered himself as a raffle item for the night’s fundraiser.

“You can also have a date with me, I’ll take you out for a nice dinner,” he jested. “High bidder will get a coupon for it.”

According to what was embroidered on patches and printed on T-shirts, there were a variety of groups and affiliations at the Riders with Heart Redneck Cook-Off; The Illinois Widows Sons Paul Revere Riders, American Legion Riders, Bikers Against Child Abuse.

They talked in small groups, and milled about Morton VFW Post 9521 in heavy boots with plates of homemade food. Mac’s wife Tonya made cupcakes and RWH sugar cookies, which were quickly eaten.

Teresa Brashers sold hooded sweatshirts, T-shirts and other regalia while Clements rattled off the winner’s names and gave away prizes, like a giant, wooden RWH spoon.

The silent auction tables were lined with baskets of wine, spirits, gift certificates and various food stuff and utensils. But it wasn’t really the auction, the competition or the food that lured a throng of bikers out on a cold night, on four wheels instead of two.

It was the cause. Riders with Heart raises money for sick and underprivileged children. It is a volunteer-run group that started 15 years ago as a way to simply do “a little something special” for kids who are struggling through painful moments in their lives.

“When we started off, it was kind of a coalition of different organizations, but we split off of that because we wanted to do something or own way, on our own,” Clements said. “We were just gonna start doing benefit rides and raise money and help kids. Then we got serious and made it an organization.”

What he means by “our way, on our own”, is that he and the other founding members wanted the money they raised to go directly to the children, not pooled in a funds pot, then distributed. The group helps kids who are effected by a variety of situations. Some are ill, others, injured. Some are victims of violence, domestic or sexual abuse, while others may be dealing with the consequences of a natural disaster or a fire.

“We keep what we do word-of-mouth. We’ll find out about kids who, maybe, have cancer or a heart problem,” Clements explained, “or something else is wrong, maybe Mom’s sick and its effecting the children, or there’s been a house fire, and they need things like clothes or shoes.” 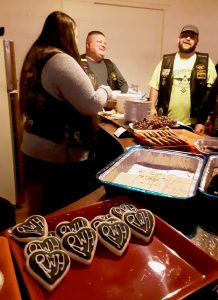 It’s not hard to get a group of bikers together on a cold, early February night when it’s for a good cause. Riders with Heart, an organization the serves children in need, held its annual Redneck Cook-Off at the Morton VFW Post 9521. Sugar cookies were crafted by RWH secretary Tonya Clements. (Photo by Holly Eitenmiller/for Chronicle Media)

When RWH finds a child in distress, they’ll earmark $500 in funds, then tailor a plan to make a surprise visit with the money, when possible.

“If there’s a benefit, the volunteers will get together ahead of time, then we all show up, unannounced, and surprise the family,” he said. “It’s touch and go with how often we donate. Sometimes it’s just like, bang, bang, bang, we’re donating all the time.”

Along with the money, they also make sure the child receives some sort of gift. In the past, they handed out t-shirts, backpacks and stickers. In recent years, they’ve opted to give the kids teddy bears.

“When we go to a donation, we give them a bear with a little custom-made RWH T-shirt on it,” Clements said. “We want them to remember us and we don’t want them to feel alone.”

To keep up the pace, RWH hosts its annual Redneck Cook-Off, and they also coordinate three motorcycle runs per year, and they’ll take donations anytime. They also have a line of RWH promotional gear, T-shirts, hooded sweatshirts, bumper stickers, bandannas, to promote the cause in bring in cash.

“We’re really proud of what we do, and it’s turned out to be a really nice set up. We’ve had a lot of great volunteers and people who are really loyal,” he said. “We have a flock of other groups and organizations and supporters. People really care about these kids, and doing something special for them.”