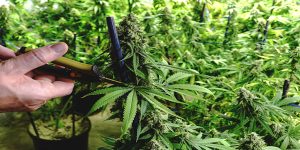 Municipalities have until Oct. 1 to decide to sign onto a 3 percent state recreational sales tax on legal cannabis in order to collect the revenue in 2020.

Moral and fiscal debates aside, the time has come for local officials to decide on whether to impose a tax on recreational cannabis sales or ban its sale altogether.

When Gov. J. B. Pritzker signed off on the Cannabis Regulation and Tax Act in June, an Oct. 1 deadline was set for all municipalities that hope to benefit from a 3 percent recreational sales tax to opt in, or they’re out until 2021.

The Municipal Cannabis Retailers’ Occupation Tax, MCROT, is considered by some municipalities as a great way to benefit from what might be an inevitable reality. Others have opted to outright ban the possibilities of recreational marijuana sales.

One week after the law was passed this summer, the Morton Village Board voted unanimously to ban recreational cannabis sales within city limits. Morton was first in the area to rule on the issue, and Village Attorney Pat McGrath made clear the decision was ethical.

“I believe the board’s vote reflected that the six trustees thought similarly to the mayor in terms of what the community’s sensibilities were on this issue,” he said.

In Woodford County, the village of El Paso and the city of Eureka have since followed suit. El Paso’s six council members voted unanimously and six of seven Eureka board members gave MCROT a nay vote. Eureka Councilman Rich Teegarden voted in favor.

“About 10 people came to the meeting, and there were two who just wanted to educate on the positive effects for certain health reasons,” Eureka Mayor Scott Zimmer said. “They were both using it medically, and if they could have easier access to it would be beneficial.”

The village of Metamora took a more fiscally cautious stance. Village President Ken Maurer doesn’t like the idea of missing out on buck from the state. It’s possible, he said, a dispensary might be permitted in the community at some point, and it’s better to be in than out on the sales tax benefits. The board unanimously approved the recreational sales tax Sept. 3.

The city of Washington also threw its name in the state tax hat Sept. 16 by unanimous vote. The impetus was the same as Metamora’s; let’s not miss out on tax dollars, like it or not. Mayor Gary Manier, who once supported recreational cannabis sales in Washington, made an about face on the matter, and said he’s now against it.

For now, East Peoria is the only place in either Woodford or Tazewell counties that stands to benefit first from recreational cannabis sales. Nu-Med, a medical cannabis dispensary at Riverside Center, is first in line to garner a recreational sales license when the state hands them out.

Not only can East Peoria benefit from the 3 percent sales tax, there is an additional 1 percent share of the state’s take and another 1.75 percent Non-Home Rule sales tax, less the state’s fee of 1.5 percent.

The East Peoria City Council passed the sales tax rate at its Sept. 3 meeting. Only councilman Mike Sutherland, who has been an outspoken opponent from the start, voted against it.

Still, there’s a catch in the deal. A drafting error prevents cities like East Peoria from pocketing MCROT dollars until Sept. 1, 2020. In an attempt to amend the cannabis law for collections to begin Jan. 1, municipal leaders statewide are planning to lobby legislators during a week-long General Assembly veto session Oct.  28.