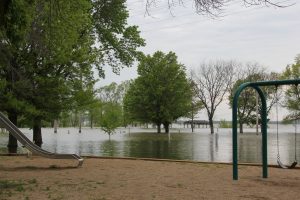 Recreational and boat docking facilities remain inaccessible at Carl Spindler Campground and Marina due to flooding. Just off of Illinois Route 116, the campgrounds, which are at a slightly higher elevation, remain occupied by motorhomes, but the rental cottages, which were near the boat docks, have been moved until the river recedes. (Photo by Holly Eitenmiller / For Chronicle Media)

After what was a dreary weekend of busy sump pumps and shop vacs for most people, at least one person in Central Illinois was happy with the weather the morning of May 1.

“The river was at 22.3 Monday morning and that was great news to wake up to,” City of Peoria Public Works supervisor Sie Maroon said. “We thought we were going right to the river and start working that day.”

The Illinois River had risen five feet by April 28 and was predicted to reach 29 feet before cresting. “Then it was 26 feet, 25.5 and that was very encouraging. Our record from two years ago was 29.4,” he said. Flood stage is 18 feet.

By May 5, the river crested at 23.4, bringing about a resounding sigh of relief from local business owners and residents, but not without trepidation.

Some water has flooded parking areas and walkways near Peoria’s historic train station on Water Street, and the river remains ominously close to the concrete embankments there.

A May 4 view of the Peoria Lock and Dam from the Shade-Lohman bridge, which spans between Peoria and Tazewell Counties. The Illinois River now reaches the limbs of these large bordering trees. The inlet to the right is reserved for barge traffic to Keystone Steel and Wire in Bartonville, and, when water levels rise, it becomes impassable to barge traffic. (Photo by Holly Eitenmiller / For Chronicle Media)

“It climbs fast and if you look at the projections on how soon it drops, until next Wednesday night, it’s only going to drop down to 22,” Maroon said. “I hope they’re wrong, but at least it’s a drop.”

Another bout of heavy rains, here or to the north, however, threatens to resume the problem. Five day projections for southern Wisconsin and northern Illinois and the Peoria area starting May 5 show a minimal chance of rain.

The recent deluge has not left the area without some woes. In due course, Kickapoo Creek flooded,turning parks, farmland and backyards to swamps. The bridge at Pottstown which crosses the creek was closed.

Peoria Speedway on Farmington Road, a popular dirt track racing arena, sits in the floodplain along Kickapoo Creek, and owners Brandon Dean and Jason Plumer pumped roughly 9 million gallons of water from the property. They do not have flood insurance. 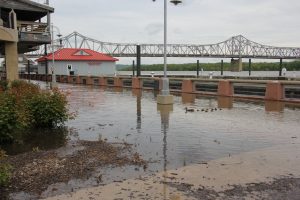 A mother duck and her nine ducklings swim about the parking area beneath New Amsterdam Bar & Restaurant at 120 SW Water St. in Peoria. At its current level in Peoria, the Illinois River poses little threat to riverfront businesses, but a good rain locally or in northern areas will cause it to rise problematically. (Photo by Holly Eitenmiller / For Chronicle Media)

Boat docking areas in Pekin and East Peoria are also under water. At Carl Spindler Marina, off of Illinois Route 116 in East Peoria, three small rental cabins have been relocated to a dry spot on the parking lot. Recreational vehicles there are on an elevated area, with little threat of flooding.

City of Pekin Public Works Assistant Operations Supervisor Brett Olson said the main parking area at the river is also flooded, but that, he said is the main problem for now.

“The river is high, but it’s holding steady. We have a pump house on State Street, and if it gets too high we’ll divert the water to a different manhole,” he said.

During excessive flooding, it’s the west side of Pekin that suffers, Olson explained, but that area remains dry, as well as Pekin Boat Club. 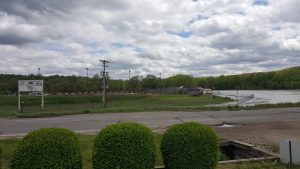 As is par for the rainy season, Peoria Speedway at 3520 W. Farmington Road was underwater following the late April downpours. The popular drag racing attraction lies within walking distance of Kickapoo Creek, which rises in tandem with the Illinois River in heavy rain. Speedway co-owner Jason Plumer, said more than 9 million gallons of water were pumped away from the track this week. (Photo by Holly Eitenmiller / For Chronicle Media)

Overall, Maroon said, there’s a lot to be grateful for now that the rains have ceased, considering the severe flooding that occurred south of Peoria in St. Louis, causing the deaths of five people.

“If we got another inch or better of rain we would have some concerns,” Maroon siad, ‘But, again, for us to get another inch and having it impact businesses or the riverfront, the water flows south and unless it backs up from there, we shouldn’t have much to be worried about.”