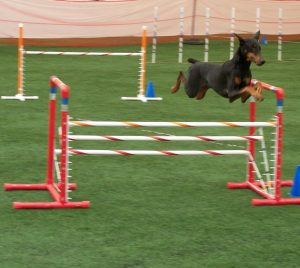 The fur was flying— quite literally —at the Pekin Avantis Dome, which played host to some of the nation’s most agile Airedales, speedy schnauzers and high-leaping Labradors during a recent competition to decide which animals get to advance to an upcoming national agility contest in Tulsa, Okla.

Offered by the Peoria Obedience and Training Club (POTC), the four-day event, held September 6-9, drew hundreds of contestants and their handlers from throughout the Midwest and as far away as Canada, according to Roxanne Minor, POTC’s American Kennel Club (AKC) trial chair for agility.

“We have had people (and dogs) from as far away as Toronto this weekend,” Minor said over a semi-cacophony of excited, yipping dogs moving between competition events. “People know of this trial and come while going to and from vacations. We get them from all over.”

Minor said the gathering was a “full trial” agility event featuring seven classification competitions per day, with first-fourth ribbons and AKC specialty ribbons awarded to the most promising pooches. The Pekin event is a stepping stone that allows the competitors to earn enough qualifying runs to attend nationals. “That is what everyone is working towards here,” she said.

While most who attended the event were competitors, clusters of curious families with small children in tow wandered into the Avantis Dome over the weekend to get a peek at the event. Many of the competitors allowed the kids to pet their dogs and spend time with them, such as Judi Cunningham of St. Louis, who introduced five-year old Bert, an English sheepdog, to a group of young fans just moments after Bert had competed on an agility course. 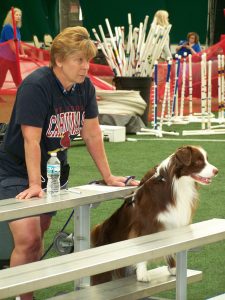 Sculpin with Chris Brewer was one of hundreds of entrants at the Peoria Obedience and Training Club’s agility competition held Sept. 6-9 in Pekin. (Photo by Tim Alexander/for Chronicle Media)

Suzy Bishop, 67, of Moline, was on hand with her 13-year-old golden retriever Gretchen. “She has been to nationals and she is still competing at her age,” Bishop said of Gretchen, “but she is starting to slow down. I guess we both are, but this sport helps to keep both of us healthy and moving. It’s a good sport.”

And then there was Sculpin, a male Australian shepherd owned by Chris Brewer, who was so intently focused on a competitor’s agility run that he could not be bothered for a photograph or interview. “He is watching his father compete,” Brewer explained, as the dog remained at attention— head and eyes moving from side to side as dad ran — from his bleacher seat. “He is completely focused.”

Two, fenced agility courses, one for smaller and one for larger dogs, divided the Avantis Dome in two, with bleachers, temporary cages and clusters of bag chairs and coolers scattered around and between.

The courses featured agility challenges such as tunnels, teeter-totters, hoops, cones, and high hurdles. The hurdles begin in a low position but are raised between rounds to increase the degree of difficulty. 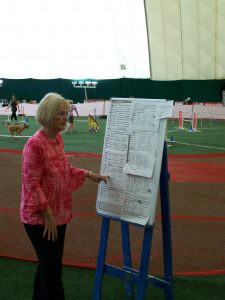 Chart shows dozens of larger dogs competing and order of trials during the agility competition sponsored by the Peoria Obedience and Training Club and held at the Avanti Dome in Pekin. (Photo by Tim Alexander/for Chronicle Media)

Most of the competitors — from 15-pound pugs to 70-pound sheepdogs — whisked through the courses largely without incident. Waiting at the end of the course for the pooches, as always, was a tasty treat from a special pouch and an appreciative hug from their owners. Some earned a trip to Tulsa for the 2019 AKC National Agility Championship on March 15-17, 2019.

The 2018 agility championship, held in Reno, Nev., played host to 917 dogs and their owners. “These dogs are true athletes, and it’s amazing to see them do what they do best,” says Carrie DeYoung, AKC director of agility.

The POTC is located near Peoria in Pottstown, where members including AKC judges, veterinarians, vet techs, professional handlers, kennel managers, trainers and groomers assist around 1,000 members and their canine companions in a wide variety of training techniques. “We offer classes in obedience, therapy dog training, agility and have many other classes and forms of instruction that are available to our members,” said Minor.

The club boasts some of the top obedience, agility and “flyball” competitors in the country, according to the official POTC website, with many conformation champions getting their start at the facility. 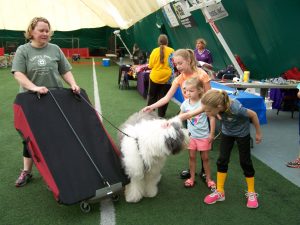 Formed in 1946, the POTC recently remodeled its indoor training facility, which is located on Southport Road, with a sound absorbing system and added more mats to cover its entire floor surface. All POTC instructors are unpaid employees, which ensures their loyalty and devotion to the animals, the website says.

For more information on the Peoria Obedience Training Club, visit www.potcdogs.com or call 309-676-9472.