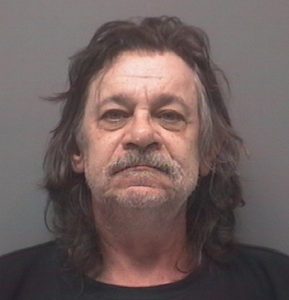 When passersby noticed David Earl Mason parked on a curb behind Godfather’s Pizza in Pekin Feb. 5, it looked like he was unconscious, so they phoned the police.

But when an officer pulled up behind the car and switched on his emergency lights, Mason took off driving, headed through the traffic lights at Parkway Drive and plowed through a high school classroom wall.

“Around 9:30 p.m. last night, a driver of a car attempting to elude police drove onto campus … one classroom was affected by the impact of the crash,” Pekin Community High School District 303 Superintendent Danielle Owens said in a statement. “No one was present in the classroom at the time of the incident.”

Mason, 64, targeted a wall made up mostly of windows, then refused to get out of the sedan, which was still in drive, and surrender to police.

Pekin firefighters shattered a car window, and Mason fought police as they pulled him from the car. He was taken to Pekin Hospital, then released without injury and charged with driving under the influence, fleeing/eluding a police officer and resisting arrest, according to the sheriff’s office.

According to the Tazewell County Sheriff’s Office, Mason claimed he is epileptic and pulled up behind the pizza place because he thought he might have a seizure. Mason allegedly told sheriff’s police he can’t recall any details of the police chase or the crash, but authorities said this alibi won’t change the charges he’s facing.

They’ll be stacked on top of an aggravated reckless driving charge he was handed on Jan. 13.

Mason told authorities that he is recovering from drug addiction, and there may be traces of methamphetamine that show up in a toxicology report, but claimed he wasn’t under the influence when he fled police.

He’s scheduled to appear in court twice in March for both incidences.

Classes resumed the following day at PCHS without much hassle. The wall was boarded shut, and the classes who met there were temporarily moved to another room.