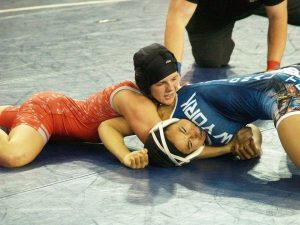 East Peoria High School senior Randi Robison, left, began wrestling in third grade. Like most female middle and high school wrestlers, Robison has faced more boys than girls in that time, and said she’s had to focus on technique to combat the strength advantage of her male opponents. (Photo courtesy of Bobbi Robison)

Randi Robison was only 8 when she began to wrestle. On March 10, the East Peoria senior capped her high school wrestling career with the Illinois Wrestling Coaches and Officials championship, and she’s headed to Kentucky’s Campbellsville University, wrestling scholarship in hand.

“My first year I did not like wrestling at all. I didn’t like the running, warming up,” Robison admitted. “I only did it for a year, then tried basketball, and I really didn’t like that, so I went back to wrestling in fifth grade.”

Enacted in 1972, Title IX of the Education Amendments Act ensured that girls could have equal athletic opportunities, even in the male-dominated sport of wrestling. It’s not easy, she said, competing against boys.

“Wrestling guys is so much harder, because they’re much stronger than me, so I have to make up for it with technique,” Robison explained, “and the boys can be merciless.”

Indeed, no wrestler enjoys losing, and boys particularly don’t want to be defeated by a girl. Robison said she’s worked to keep her weight around 126 to avoid facing the bigger, stronger boys. Still, when she has her opponent locked in a painful, twisted ball on the mat, she makes it look easy.

This year, Robison is ranked No. 5 in her weight class in the National Girls High School Ranking. She attributes her success to a number of coaches, camps and competitions. Until high school, she trained with the Illinois Kids Wrestling Association.

“At first, at the junior high, they weren’t going to let me wrestle, and we had to go through a whole process,” she said. “We had to have a meeting with the coach and the principal, the athletic director, then they had to call all the other junior highs and let them know, so they could open up to girls.”

From the beginning, Robison dealt with opposition from traditionalists who don’t think females belong on the mat. Others, she said, championed the girls’ wrestling movement and supported her.

“Obviously, I was different than everybody else, so there was a lot of attention and pressure on me,” she said. “Some people were watching for me to do well, and there were others who are against girls’ wrestling and were wanting me to lose.”

Just this past season, Robison was wrestling at a local high school and had to endure the taunting of a hostile parent.

“This year, one of the kid’s dads I wrestled was in the bleachers behind my mom,” she recalled. “He was yelling at him to beat me, because I’m a girl, only he said a lot more than just that, and not nicely.”

“We know it’s growing, and it will continue to grow. There are question marks, though. We need to know how many girls are actively participating,  how many are finishing the season,” Knox said. “We also need to look at the logistics of where those (competitions) would fall on the calendar and where would we host those. Those aren’t impossible questions.”

Currently, only the IWCOA hosts a girls championship tournament; the same tournament that Robison dominated the 126-weight class. The matter, Knox said, is on the agenda for the April 17 IHSA Wrestling Advisory Committee meeting.

Opportunities do abound for female wrestlers. Before she heads to Kentucky, Robison plans to compete in the Illinois Girls Freestyle State Championships, the Team Illinois National Duals and the USA Wrestling Women’s National Championships in Irving Texas.

Robison, who is an Illinois State Scholar with a 3.95 grade point average, plans to leverage the opportunities that await her at the college level. At Campbellsville, Ky., where she’ll only compete against girls, she stands a good chance of being seen.

“I need to go to college and get noticed there. They have world championships they take you to, and that’s how you can get on Team USA,” she said.