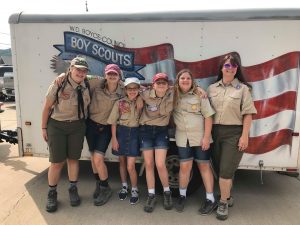 On Feb. 1, 2019, more than a century after it was founded, Boy Scouts of America became known as Scouts BSA, granting girls the chance to become Eagle Scouts.

A month later, Scouts BSA East Peoria Troop 1627 was among one of the first girl troops to form.

“I was Den Leader of a group of fifth-grade girl Cub Scouts, so we had a big group of girls in the Arrow of Light then,” said Korey Atterberry, Troop 1627 Scout Master. “We knew we needed to form a new troop for the girls who would be moving up from Cubs.”

Atterberry is referring to a lesser-known move Scouts BSA made a year before changing its name. On Jan. 15, 2018, Boys Scouts of America began accepting girls into the its Cub Scouts program. Naturally, it seemed fit to make the entire Boy Scouts program inclusive so that these girls could move seamlessly from one level to the next.

Cub Scouts who earn the Arrow of Light advance to Scout rank, which is followed by six sequential ranks; Tenderfoot, Second Class, First Class, Star, Life and Eagle. Most Cubs move forward around fifth grade, and have about 11 years to progress through the ranks before turning 18.

But there is no luxury of time for girls like Troop 1627 founder Celeste Saul, who turned 17 in September. A Scout can work on the requirements for Tenderfoot and Second and First Class ranks at the same time, and usually earn them, in order, within a year or less. 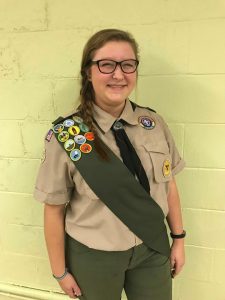 As Star Scout Celeste Saul makes her way toward the Eagle Scout achievement, she’ll be required to earn at least 21 merit badges. Since she joined February 2019 as a founding member of Scouts BSA Troop 1627, Celeste has earned 14 with three in progress. (Photo courtesy of Sally Saul)

Celeste has done that, but Star, Life and Eagle are earned one at a time, and the requirements for each become increasingly more demanding of a Scout’s time, physical stamina and leadership capabilities.

“Boy Scouts is definitely a bit more regimented, and there are certain things to complete with a bit more order to follow,” Celeste l said, comparing her experience in Scouts BSA to that of her years in the Girl Scouts organization. “It takes time, too. For Life, you have to be you have to be in the troop as Star for six months, and you also have merit badges to earn.”

Celeste is the troop’s Patrol Leader, a Star Scout requirement, but she also must teach another Scout a skill, navigation, first aid, by employing the Edge (Explain Demonstrate Guide Enable), and also participate in a Scoutmaster conference.

Life Scout demands another six months and an even more exhausting list of terms, and neither rank can be earned without a board of review.

Ultimately, a Scout must have earned at least 21 merit badges, demonstrated, according to stringent standards, leadership within their troop and have planned, developed and lead an impressive community service project, The Eagle Project, before he or she will be considered for Eagle Scout rank.

Fortunately for Saul, last February, Scouts BSA offered a one-time, two-year extension to all new scouts who are older than 16 and under 18 in which they may earn Eagle merit. It applies to boys and girls, and was handed down by the BSA’s National Executive Committee because “everyone deserves a chance to work toward Eagle.”

“The badges are tough, and, even with the extension, Celeste is going to have to work really hard. She’ll camp a total of 20 nights, and that takes time,” Atterberry said, “and there’s another hard challenge … she’ll have to do one of three techniques, either in swimming, hiking or biking and they are all very difficult.” 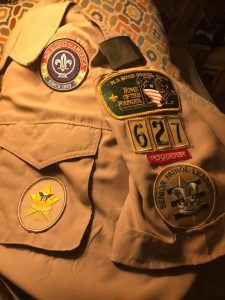 The sleeve of Celeste Saul’s Scouts BSA uniform is very telling. Since joining BSA Troop 1627 as a founding member, Celeste has worked diligently to rise through the ranks in her bid for Eagle Scout. At 17, however, Saul will have to be very diligent in order to meet the organization’s requirements before her time runs out. (Photo courtesy of Sally Saul)

Atterberry said he’s noticed the girls seem a little more driven to succeed and advance in rank than many of the boys, mostly because it’s a new opportunity, a chance for something they never before expected. Many of the girls have watched their brothers and cousins advance in Boy Scouts, and are anxious to join them.

Eighth-grade Scout Olivia Tharp is beginning to make her way through the ranks, and has witnessed her cousin Ivan Tharp, a sophomore at East Peoria High School, as he’s ambitiously pursued his Eagle rank. Having just completed his service project, Tharp is on pace to cross the finish line before his junior year.

Boys like Tharp serve as impressive role models for the up-and-coming girl Scouts, but even so, there are no other girls ahead of Saul for her to look to in her breakneck run for Eagle Scout. But if she looks over her shoulder, without breaking speed, she’ll see countless other girls who’ll follow in her footsteps.