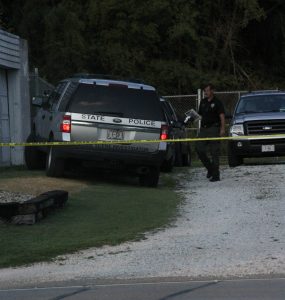 Illinois State Police crime scene investigators were at 14316 Route 29, just south of the city limits of Pekin to investigate the discovery of human remains Monday, July 24, on that property. The dental records of missing Pekin teen, Robert Bee, Jr. have been requested in connection to the remains. (Photo by Holly Eitenmiller / for Chronicle Media)

The dental records of a missing Pekin boy have been requested by police in connection to bones found Monday afternoon by a homeowner in south of Pekin.

Tazewell County Sheriff’s department officers were called to 14316 Rte. 29 at approximately 2:15, after the property owner encountered human bones while grooming the lawn. Until recently, the property was mowed by the former boyfriend of Lisa Bee, the mother of Robert Bonsai Bee, Jr.  who came missing November 17, 2016.

Peoria County Coroner Jamie Harwood has scheduled a preliminary autopsy for 8 a.m. Tuesday morning, and has arranged for a dental expert to assist in that autopsy. Robert was missing a portion of his left incisor, due to what appears to be decay.

Even if his mother had not taken the boy for regular dentist’s visits, she was required by the Illinois State Board of Education to provide dental exams for kindergarten and second and sixth grades, unless a waiver is given for a child on reduced or free lunches.

The 13-year-old fled from his home at 233 Sapp St. after a Pekin Police Dept. truancy officer visited the home to issue a ticket. His mother reported the boy missing the next day, and he has been considered an endangered runaway since then.

A large contingency of volunteers, calling themselves “Team Bonsai”, have since diligently searched for the boy nearly every weekend since he was reported missing. 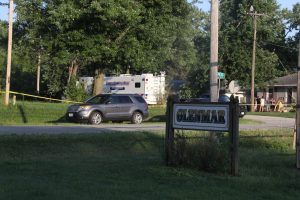 An Illinois Law Enforcement Alarm Station remained stationed at the corner of Route 29 and Woodford Drive in Pekin as Illinois and Tazewell County police continued investigating the property at 14316 Route 29 were human remains were found Monday. The area soon populated with Robert Bee, Jr. supporters after the call was made to police that afternoon. The 13-year-old has been missing since November 2016. (Photo by Holly Eitenmiller / for Chronicle Media)

Recently, they enlisted the help of Trucks 4 Kidz, a charitable group from Missouri that have a successful record for finding missing children.

Sunday, Trucks 4 Kidz volunteers discovered a sweatshirt thought to be that of Robert Bee’s in an area off of Interstate 474 by the Shade-Lohmann Bridge. Police investigated the area, but it was determined the article of clothing was not the boy’s.

Team Bonsai volunteer, Brooke Bailey, has actively engaged in searching for the teen, and has searched the area around the Rte. 29 location where the remains were found, and said she believes the remains may have been in an outbuilding located along the adjacent Woodford Drive, but the location of the bones has not been confirmed by investigators.

Since Robert’s disappearance, Lisa Bee has had little involvement in searching for the boy. According to her own Facebook posts, she was evicted from the Sapp Street house in February and has since lived a transient lifestyle, often interring herself in mental health wards and drug rehabilitations.

Police also did not confirm the condition of the bones or where on the property they were discovered; whether it was inside the outbuilding, or in the yard.