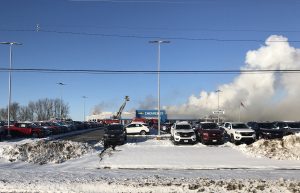 About 100 firefighters battled a blaze at Uftring Chevrolet, in Washington on Friday, Jan. 5. (Photos by Amy Morys/for Chronicle Media)

Fire broke out at Uftring Chevrolet, 1860 Washington Road in Washington around midday on Friday, Jan. 5.
Several fire departments responded to the blaze, which began in the tool room, according to reports.   No direct cause was known.

Uftring employs about 80 people and all of those working that day and customers at the business were able to get of the building without injury, according to reports.

About 100 firefighters were at the scene.  No monetary damage estimates are yet available. 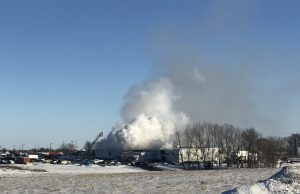