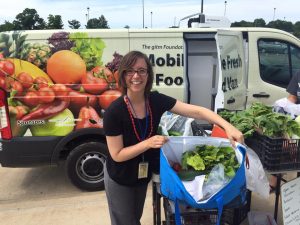 Sometimes we take for granted that fresh produce and staples such as milk and bread aren’t always readily available — and affordable — for everyone.

But one East Peoria-based nonprofit is working to change that.

The Gifts in the Moment Foundation’s Mobile Fresh Food Van is in its second season of bringing fresh staples at affordable prices to places where access to fresh food is lacking in Peoria, Tazewell and Woodford counties.

The van is the product of collaboration between the foundation, the City of Peoria, and the Peoria Police Department Explorer Program.

“We took the concept of an urban farmers market and took it on the road,” said Denise Urycki, chairperson of the foundation’s board.

During the 22-week growing season, the van stops Tuesday through Friday at nine locations, such as public housing, community centers and more, in Peoria, East Peoria and Eureka.

Many of these sites are considered “food deserts,” where access to fresh, healthy food is lacking, Urycki said.

Customers at each host site can purchase fresh produce, as well as staples such as bread, milk, eggs and butter. SNAP/Link cards are accepted. 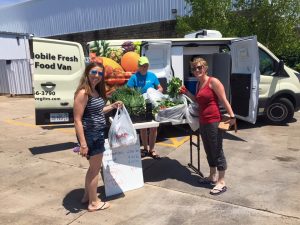 Produce primarily comes from and is funded by the foundation’s community supported agriculture (CSA) program at its Tri County Fresh Food Hub, Urycki said.  Produce also comes from community gardens and donations. A CSA program allows consumers to purchase a “share” from local growers that provide them with a weekly allotment of produce.

Produce to be distributed at the van is given an organic wash by volunteers at the Tri County Fresh Food Hub at the former East Peoria Event Center. It then is transported to host sites, Urycki said.

Urycki and foundation co-chair Kim Keenan approached Laible about bringing the van to the hospital.

“I was beyond excited to do it,” Laible said. “As health-care providers, who better to model healthy eating, living?”

The van program has been gaining momentum every week, she added.

“I think it’s been a big hit here with our staff,” Laible said.

“If you are a home grower and have excess produce, if you bring it to us at any of our stops, we’ll bring it to areas in need,” Urycki said.

Donated produce will be given an organic wash and rerouted to places such as local food pantries, she added. 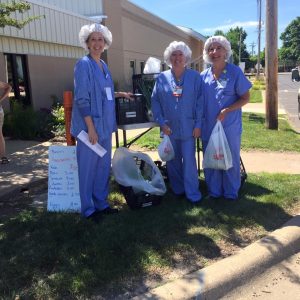 The foundation also is looking to expand its mission of promoting healthy living. It would like to convert a concession center at its hub into a commissary/kitchen where local farmers and entrepreneurs could prepare and sell goods such as pies; and the foundation could conduct cooking and nutrition classes, as well make and sell soup with excess produce, Urycki said.

It also is seeking grant funding for a second van that primarily would serve Tazewell and Woodford counties.

For more information about the Mobile Fresh Food Van and The gitm Foundation, visit believegitm.com, call (309) 966-3790 or email gitm@mitco.com.