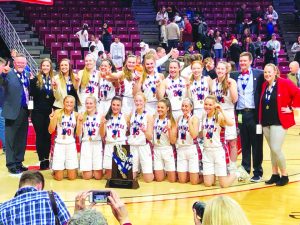 And, just like that, the Morton Potters girls basketball team netted another Class 3A state championship at Redbird Arena in Normal on Saturday, March 2.

After nabbing an early 15-point lead, the No. 3 Potters began the second half leading 24-5 and that set the tone for the Potters to dominate much of the game .

Despite a frustrating third quarter, the Potters triumphed over unranked Glenbard South, in a solid 35-21 win.

All-State forward Lindsey Dullard scored first with a left-hand layup, and handily dropped a three-pointer with a pass from Butler University-bound senior Tinley Dowell. Junior Courtney Jones landed a shot that brought the Potters to its initial 15-point lead.

Six-foot-one freshman Katie Krupa finished the game with 10 points, as did Dowell, who nabbed six rebounds, three steals and two assists. The Potters ended the season 33-3. 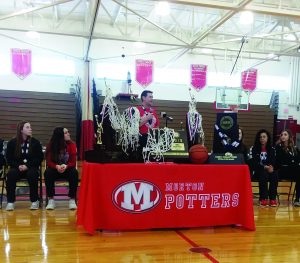 “These guys will be champs in life because of who they are, what they stand for, the habits that they’ve built, and I’m completely proud of them,” Morton Potters coach Bob Becker said of the team that brought home its fourth state championship in five years.(Photo by Holly Eaton/for Chronicle Media)

“They continue to amaze me with their consistent excellence. That’s something that’s hard to achieve,” Potters coach Bob Becker said during a rally reception at Morton High School on Sunday, March 3. “In our program our expectations are off the chart it’s kind of ridiculous and it’s kind of not fair, that sometimes, we expect to be the best.”

It’s the fourth state championship for Morton and Becker, who has coached the team for 20 years. In 2007 and 2013, the team placed fourth, but in 2015 the Potters clinched the Class 3A championship and it was a watershed moment for the program.

The team went on to win three consecutive state championships, but was interrupted in 2018 when Peoria’s Richwoods High School bested the Potters and landed the championship.

“As we continued to win, the target got bigger and bigger and they were hunting us,” Becker said, slightly tongue-in-cheek. “We’ve motivated Richwoods, we raised the bar. Now there’s that rivalry. It’s a healthy rivalry. We got the best out of each other. They beat us last year to win the state championship.”

Still, the Potters stand a good chance of dominating the decade. 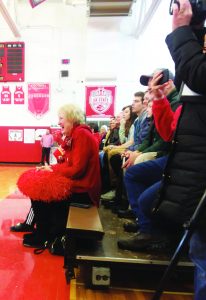 The team was escorted to the reception at the Potterdome Sunday by a police and fire escort that began at 10:45 a.m. on Courtland Street. Despite the frigid temperatures and freezing rain, they were met with a packed house.

“These kids invest so much that we don’t get to see, not just in the season, but out of the season … they’re multi-talented, multi-sport kids, with a collective GPA of 4.0,” Becker told a cheering crowd. “These guys will be champs in life because of who they are, what they stand for, the habits that they’ve built, and I’m completely proud of them.”

Joan Krupa of Peoria, was among the jubilant bystanders, waving red pom-poms and cheering for her granddaughter Katie.

“It’s such an exciting time for everyone, and Morton really supports their teams,” she said. “I cannot believe the loyalty of people, some family, some just fans that come to every game.”

The devotion of the community did not go unrecognized by Becker.

“There’s so many people here that are part of what makes this happen, on behalf of our team to thank you for being parents, fans, supporters, awesome community members,” he said. “To buy into the excitement and hopefully be proud of what we’ve done up here … It’s awesome that our whole community is connected and we can be a part of something bigger than all of us.”