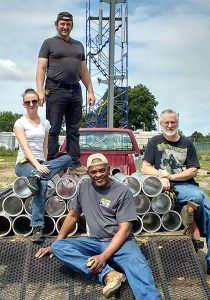 Brett Fugate (standing) poses with some of his employees on some of the aluminum tubes the crew used to build 40 unique wind chimes that will soon hang in a national memorial to those who lost their lives in the hijacking and crash of United Airlines Flight 93 on Sept. 11, 2001, near Shanksville, Penn. Sitting from left to right are Carly Todd, Bert Durr and Chris Arnold. (Photo courtesy of Brett Fugate)

When crowds gather next month for the dedication of the Tower of Voices memorial to those who perished in the 9/11 hijacking and crash of United Flight 93 in Pennsylvania they’ll be joined by a local man who built the monument’s one-of-a-kind wind chimes meant to represent the voices of the flight’s passengers and crew.

“What it represents is pretty profound,” said Brett Fugate of Morton. His firm, Fugate Inc., was chosen by the National Park Service earlier this year to build the 40 unique chimes, and he’s spent most of the spring and summer creating them out of aluminum tubes.

“It was an event that changed our country, and I feel good knowing this instrument is designed to stand the test of time so generations beyond my life cycle will hopefully be able to enjoy it. It’s a feeling I can’t really put into words,” Fugate added.

Though he’s prohibited by the NPS from divulging specific dates, Fugate said he’ll be on hand when the wind chimes are installed at the Tower of Voices, essentially a 93-foot tall musical instrument set among a ring of trees that is the final phase of the Flight 93 National Memorial near Shanksville, Penn. He will also be there for the public dedication on Sept. 9.

The chimes will serve as a visual and audible reminder of the heroism of the 40 passengers and crew who died in a crash at the site on Sept. 11, 2001, while fighting to stop terrorist hijackers from reaching their intended target, believed to be the U.S. Capitol in Washington, D.C.

The flight had been en route from Newark, N.J., to San Francisco, Calif., when it was hijacked along with three other planes that morning that crashed into the World Trade Center in New York City and the Pentagon in Arlington, Va.

Design and construction of the tower—totaling nearly $6 million—was made possible through a grant from the National Park Foundation.

“I’m excited to see them after they’re installed, but it will be even more fulfilling to me to actually hear them,” Fugate said. “Out here at my facility we put up a mock tower and I can hang as many as two chime tubes at one time. So I can hear two of them ring at once, but it will be more exciting to hear 40 of them at once.”

Cranes help set the concrete legs of the 93-foot tall Tower of Voices, which will be dedicated on Sept. 9. Brett Fugate of Washington, who built 40 unique wind chimes for the tower, will be on hand for the installation of the chimes and the public dedication. (Photo courtesy of the National Park Service)

Fugate’s company, which he started about five years ago, manufactures patented percussion instruments, as well as wind and brass instruments that are sold nationwide. He previously worked as a chime tuner for a Chicago firm that manufactured cathedral chimes, among other instruments.

Fugate said the biggest challenge in building the Tower of Voices wind chimes came in tuning the polished aluminum tubes, which range from eight to sixteen inches in diameter and approximately five to ten feet in length. The size of each chime is dependent on the musical note and associated frequency that it’s intended to produce.

The chimes will be wind-activated with internal strikers attached to sails projecting from the bottom of each chime.

“Nobody has ever tuned any chime tubes that are the dimensions we’re using, so one of the challenges was figuring out the lengths of the tube in relation to a specific frequency we were trying to find,” Fugate said. “But I’m a tuner, so that part was fun. And I welcome a challenge.”

Fugate laughed lightly when asked how many hours he’s put into the project.

“We’ve been working full-time and overtime since March to get these done, so you can do the math,” he said. “We’ve put in a lot of time and effort.”

He currently has six employees, all of whom helped with the project.

Fugate said he thought often of the people of Flight 93 that the chimes are meant to represent throughout various phases of the project. “It always crosses my mind why we’re building these and what it means to the country,” he said.

Overall, the National Park Foundation raised more than $40 million through its Flight 93 National Memorial Capital Campaign to fund reforestation of the park’s landscape and design and to construct the park’s Memorial Plaza, Wall of Names, 40 Memorial Groves and Field of Honor.

Fugate said he’s looking forward to returning to the Flight 93 National Memorial and Tower of Voices in the future to see how it changes. 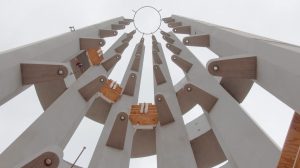 This is a ground view looking up at the inside of the two tiers of the Tower of Voices memorial that will feature 40 one-of-a-kind wind chimes built by a local man and meant to be a visual and audible reminder of the heroism of the 40 passengers and crew who died in a crash at the site on 9/11 while fighting to stop terrorist hijackers from reaching their intended target, believed to be the U.S. Capitol in Washington, D.C. (Photo courtesy of the National Park Service)

“There are some unknowns here,” he said. “It’s a unique musical instrument that nobody’s every built before. So the dynamics of that include questions about how the weather will affect it. Maybe it would be cool to go out there during a thunderstorm and see the difference between that and a calm day.”

And while it might be tempting to take some time off after completing such a large project, Fugate said he’ll be back to building musical  instruments as soon as he returns from the Tower of Voices dedication.

“We’ve got to keep moving. Business requires cash flow, and we do have musical instrument sales going on as we speak,” he said. “I think our brand name is pretty reputable and there are a lot of people out there that know about our products and want to order them. I think, hopefully, the Tower of Voices will also help some other customers take notice of us.”

Fugate Inc. has a full line of band instruments on display at its Morton facility at 1349 W. Birchwood. For more information, call (309) 263-9956 or visit the company’s website at www.fugatedrums.com.

For more information about the Flight 93 National Memorial, visit www.flight93friends.org.