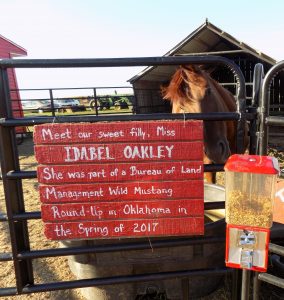 If Old MacDonald really had a farm, it would probably look a lot like the Ackerman’s Centennial Farm outside of Morton on U.S. Route 150.

For almost two decades, John and Eve Ackerman have grown and sold ornamental pumpkins, specialty gourds and sundry other popular fall holiday produce on their family farm, while fashioning a swath of the property into an attraction that includes a 6.4-acre corn maze, a petting zoo and an educational program.

“We have about 2,000 school children who run through our education program,” John said. “We have a three-part field trip. The kids can see pumpkins up close, then we take them on hay rack rids to the field to show them where we grow. Then we show them the animals. We’ve always had animals on this farm.”

“Always” is a long time for the Ackerman family. In 2016, the 300-acre farm was accepted into the Illinois Centennial Farm program, an Illinois Department of Agriculture initiative that acknowledges family who have owned their farms for more than 100 years.

“My great-grandfather designed the house, my grandfather helped build it and my father was born in it,” John said. “This was a hog and cattle farm when I grew up and it’s morphed into something people can enjoy.”

In place of traditional livestock, the Ackermans host a petting zoo that features a rather exotic assortment of friendly animals.  Among them are peacocks, pygmy goats, Patches the calf, Alpacas Cocoa and Norm, and a miniature donkey named “Donkey” that will bray for food, as if he’s starving.

“Donkey, he’s always begging for food, even though he’s very much overweight,” John said. “He’s the most spoiled animal on the farm.”

Recently, the Ackermans added a variety of pheasants, including a Red Golden and a Lady Amherst. Lacy, the Ackerman’s beloved horse, passed away in 2016 and they have since adopted Idabel Oakely through the United States Bureua of Land Management’s Wild Horse and Burro Adoption Program. 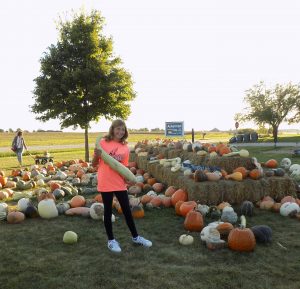 Each year, Ackerman Family Farms grow and harvest as many as 30,000 pumpkins to sell before Halloween. The Ackerman’s also grow a large variety of exotic gourds and sell around 2,000 mums before the season’s end. (Photo by Holly Eaton/for Chronicle Media)

“The horse passed a couple of years ago, she was over 29 years old,” he said. “It was very sad to lose Lady, but Idabell, she’s going on three, and she’s going to have a great life out here.”

Along with adding new animal attractions, the Ackermans have also expanded their annual corn maze. This year, they worked with the Illinois Department of Tourism to create a theme based on the Illinois Bicentennial celebration. Clues lie hidden within the 6-acre maze that, when combined, spell out a phrase.

“They are clues that a very ornery farmer has placed throughout the field,” he said of himself. “Most people find enough clues to solve the riddle between 45 minutes to an hour. There are some people who are hardcore, though, and want to find all 22 clues, that’s more difficult. If they come out and can’t solve the riddle they get a Dum-Dum candy, but if they can, then they get a Smartie.”

Each year, the Ackermans have an aerial photo of the maze taken, but do not publish the picture until after the season is over, that way no one can use it as a map to make an easier go of the challenge. When not wandering about in the corn, guests can pull a Red Flyer wagon around and load it with pumpkins, gourds, mums and such. By season’s end, John said they’ll sell about 2,000 mums and as many as 30,000 pumpkins.

This year, their bees produced more than 120 pounds of hone, a great year, he said, considering the difficulties bee keepers face.

“It’s been tough to be a bee keeper … it’s been tough to be a bee, there’s something going on with bees and not sure people know exactly what it is,” John said. “There’ve been some years when the colony collapsed, on the other hand, people have called me in the spring and I’ve captured hives the swarms that land in people’s trees, it’s quite a rodeo. It’s an interesting way to get bees.”

The family bottles and sells their honey in the gift shop, which is stocked with locally-made specialty items, including brands from the Amish communities of Tuscola. 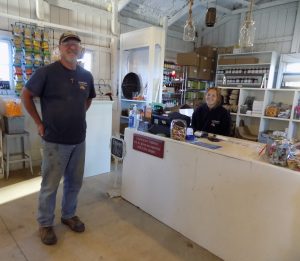 “My wife is incredibly good at finding things. People like unique, and the community has been really supportive of us,” he said. “The farm has changed and people appreciate the changes. Every year, we clean up more areas. We had some hard times in the 1980s, and we’re still working at things.”

When a local Pioneer plant needed to be rid of a pavilion, the Ackermans brought it to their farm. An unwanted gazebo made its way to the farm from someone’s backyard, and, when they wanted a pergola, the found it on Craig’s List. The goal, he said, was to create beautiful settings so that guests can take photos.