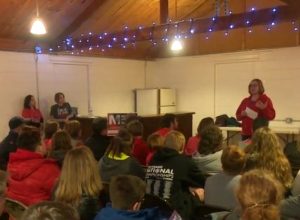 Morton High School students and parents filled the Morton VFW Post on Veteran’s Road on Dec. 4 to protest the reassignment of MHS band director Jeff Neavor, who allegedly engaged in an inappropriate relationship with a fellow staff member. (Photo courtesy of Sara May)

Morton High School marching band director Jeffrey Neavor is to be reassigned within District 709 for admittedly engaging in an inappropriate relationship with a high school coworker.

At its Dec. 4 meeting, the Morton Board of Education announced its reasoning for seeking a new band director for the next school year.

Board President Thomas Neely read from what he said would be “the only statement that the board, or individual board members, will make on this matter tonight.”

Generally, the board doesn’t comment publicly on personnel matters, but Neely said the board felt compelled to “set the record straight” considering the glut of misinformation surrounding the decision.

“This past year (Neavor) admittedly engaged in an inappropriate personal relationship with a female employee over whom he had supervisory responsibility,” Neely stated twice before proceeding. “He has engaged in actions which the board believes demonstrates poor judgment unfitting for someone who leads an important program in our school district.”

Neavor’s actions, Neely said, are cause for concern for potential exposure to sexual harassment charges, and his behavior is also in violation of school board policy.

The board, he said, gave the matter serious deliberation before Neavor was given the opportunity to either resign or be reassigned.

Neavor will assume a teaching position at another school in the district. 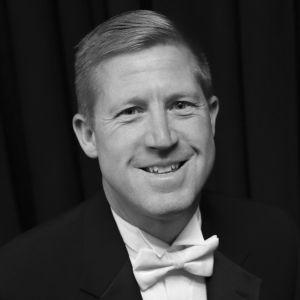 Jeff Neavor has been removed from his position as Morton H.S. band director. (Photo courtesy of Morton High School)

“You are only interested in punishing Jeff Neavor for your own reasons,” Dalton said. “I don’t believe the board of a public institution has the right, nor the authority, to be the moral arbiters for this community. I do not send my children to public school for moral training.”

Neavor has lead a “tiny band from rural Illinois” to an unrivaled string of championships, including the John Philip Sousa Foundation award, The Sudler Shield, an international award recognizing youth and high school bands of “world class excellence.”

The MHS marching band earned the Sudler Shield in 2017 and is the second band in Illinois to have earned the award in three decades. Neavor’s integrity and leadership, Dalton said, should be recognized by the board and his position as marching band leader reinstated.

“It was under the direction of Jeff Neavor that I grew into a confident, passionate leader,” MHS senior Lauren Wiggins said at the meeting. “He is the reason why I learned to treat others with respect, whether I received it or not … our band doesn’t hold the level of prestige it does because of the students. We are who we are because of Jeff Neavor.”

Many of those who spoke on behalf of Neavor received standing ovations from the group of more than 100 people who attended the meeting. The crowd was so large, in fact, the meeting was moved to a room that offered more space.

No one spoke in favor of Neavor’s reassignment. Along with parents and students, the Morton Education Association has also spoken out against the board’s decision, calling the decision “disheartening”.

Neavor, who has been with MHS for almost two decades, will retain his position until someone is hired to take his place. The school district posted Neavor’s positions as band director, band teacher and pep band director online, and are looking for someone to assume those positions for the 2019-20 school year.