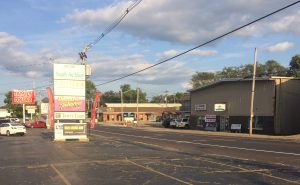 The Derby Street Corridor is being eyed by City of Pekin officials to improve traffic flow, walkability and curb appeal. The city has joined with the Tri-County Regional Planning Commission to conduct a $25,000 study of the street. Funding comes through the planning commission’s Special Projects Fund, with 10 percent funded by the city. (Photo by Holly Eitenmiller / for Chronicle Media)

Derby Street in Pekin may be on the road to becoming a Complete Street.

The City of Pekin and the Tri-County Regional Planning Commission will conduct a joint study to visualize the street’s curb appeal and determine what must be done to make that vision a reality.

The Derby Street Corridor has long been eyed by city officials as an arterial road and thriving commercial district worthy of improvements. The city recently revamped its historic district by improving traffic flow, redressing crosswalks and adding decorative lighting and benches.

City manager Tony Carson said similar changes will be seen on the Derby Corridor once the study is complete.

“It’s the south side corridor, and you hear people talk a lot about south Pekin, when they talk about the south side, Derby Street is the most notable area,” Carson said. “This will be the first comprehensive planning study ever taken of Derby.”

The $25,000 study is funded through the regional commission’s special projects fund, with a 10 percent match by the City of Pekin. City engineer Mike Guerra and city planner Katy Shackelford are reviewing proposals and applicants.

The appointed firm will then determine what modifications must be made in order to transform to the approximately 22-block road into a Complete Street.

According to the U.S. Department of Transportation, Complete Streets are “streets designed and operated to enable safe use and support mobility for all users. Those include people of all ages and abilities, regardless of whether they are travelling as drivers, pedestrians, bicyclists, or public transportation riders.”

Citylink Mass Transit does include the entirety of Derby on its South Pekin route, and the road is heavily trafficked by vehicles, cyclists and pedestrians, warranting improvements in all areas of the Complete Street list.

“There’s a huge benefit in making aesthetic changes with improved lighting and crosswalks, putting down flower pots and benches,” Carson said. “People tend to drive slower in areas like that and they’ll stop more often at businesses. There’s a lot of unique businesses on Derby.”

And many of those businesses have resided on Derby for decades; Pekin Guns and Sporting Goods, Ernie’s Family Restaurant, Unlimited Barber Shop, Mary Kay’s Curl up and Dye and 14th Street Hardware, located on the corners of 14th and Derby streets.

Carson said engineers will consider adding traffic lights to that intersection while considering traffic flow improvements. Where Derby meets 14th at its eastern end is a busy three-way intersection, marked by stop signs and often congested with motorists.

There currently are traffic lights at the western end of Derby where it meets South Second Street, a busy road that links Pekin to South Pekin.

“We’re just trying to ensure that it is a viable business corridor,” Carson said. “We’ve put a lot of emphasis on downtown, and we want all of the areas of the city to be successful and revitalized.”