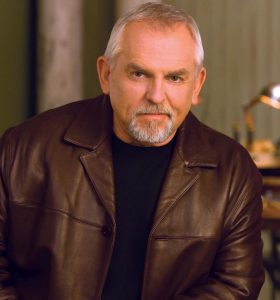 Actor John Ratzenberger, the 2018 Pekin Marigold Festival Guest Celebrity, will participate in the Saturday, Sept. 8 parade, followed that afternoon by an autograph session at the Celebrity Tent. He’ll return Sunday for a question and answer session and a second autograph signing.  (Photo courtesy of Fiddlers Bay Productions)

Once again, the white canopies will unfurl at Mineral Springs Park, making Pekin Lagoon look like a port full of ships.

“Cheers to Marigolds” is the theme of this year’s Pekin Marigold Festival (Sept. 6-9) and Art in the Park plays a large role in the festival’s attractions.

As one of the region’s most popular shop-and-stroll events, this year’s Art in Park will host 215 vendors who will showcase their goods Saturday and Sunday, Sept. 8-9. Among the wares; primitives, metal art, fused glass jewelry and wood crafts.

“People come from all over, Iowa, Michigan, Indiana. It’s so much fun and we have such a great reputation,” said Renna Hadsall, Pekin Chamber of Commerce events manager. “We require all items to be handmade in some way.”

Vendors send in photos of the product as it’s being made, along with pictures of the finished product. “That keeps it from becoming a flea market event,” Hadsall said.

Festivities begin well before Sept. 8, with the Marigold Festival Garden Contest in late July, followed by the Little Mr. & Miss Marigold and the Miss Marigold pageants. In late August, the first clue was released in the annual Pepsi Marigold Hunt.

Pekin Community High School student Zariah Wherry designed and created the medallion, and the prize for finding it is winner’s choice; a three- or four-night, all-inclusive trip for two to Cancun or a four-night Las Vegas vacation for two, air and hotel.

Ratzenberger played postal worker Cliff Clavin on the 1980s sitcom “Cheers” and voiced characters in every Pixar movie. A favorite role of Ratzenberger’s, Hadsall said, is that of P.T. Flea, the hapless ringmaster in “A Bug’s Life.”

“We’re encouraging kids and adults to post pictures with of themselves as one of his characters,” she said. “The kids can dress as one his Pixar characters, and we’re encouraging adults to take a Cheers-themed photo, such as people gathered around a bar, raising a glass or somebody dressed like Cliff, as a mailman. 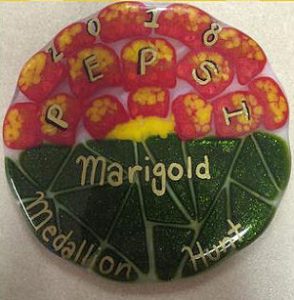 Hadsall said the children’s photos should be posted with “#marigoldsinc” and adult entries should be accompanied with a “#cheerstomarigold’. The hashtags help with Internet searching, she explained. Photos may be posted on the Chamber Facebook page, Pekin Marigold Festival.

This year’s grand marshal is Dale Sandrock.  He was nominated by the Kiwanis Club of Pekin because “he cares deeply for his community and is consistently doing what he can do make the world around him a better place.”

Sandrock generously donated to the Fund a Ride for Austin and Jackson, a project that provided two brothers, both with Duchenne Muscular Dystrophy, with a handicapped-accessible van.

Recently, Sandrock launched a recognition program to encourage members of the Boys and Girls Club of Pekin.

He will lead the Marigold Festival Parade on Sept. 8. The parade starts at 10 a.m., begins at 14th and Broadway Streets, and ends at the Tazewell County Courthouse on Court Street.

The festival dates to 1973, and the marigold was adopted as the symbol in honor of the late Senator Everett McKinley Dirksen, who admired the flower.

A comprehensive guide to the festival, including maps, a vendor key and schedule, may be found in Pekin at local businesses. The same information may be found at www.pekinchamber.com/marigoldfestival.html. 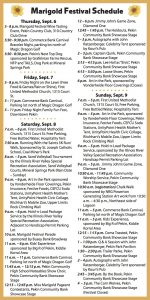