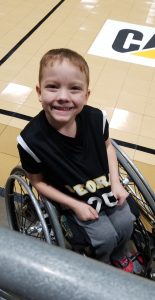 Brantley Williams, 7, of Goodfield was born with spina bifida and recently underwent his 16th surgery. His physical limitations don’t stop him from being an aggressive player for the Peoria Wildcats wheelchair basketball team. (Photo courtesy of Olivia Williams)

When Olivia Williams told her real estate agent she was looking for a house with wheelchair access for her son Brantley, she found more than a home — she found a “fantastic” coach.

“Mike Van Cleve was just a random realtor. We had no connection to him,” said Williams, who lives in Goodfield. “I mentioned to him that I needed a ranch floor plan for Brantley’s wheelchair and that’s when we found out he was the coach for the Peoria Wildcats.”

Over the March 8 weekend Brantley, 7, played basketball with the Wildcats in the IHSA Wheelchair Basketball state finals against teams from Chicago and Rockford. Last year, the Wildcats won the championship. This year, they did not, but were still competitive.

“We have a young team this year. We graduated five seniors last year,” explained Van Cleve. “Two now play collegiate ball and one is at a junior college, but might transfer.”

Peoria Wildcats players range in age from 5-21, and many of this year’s players aren’t yet in high school. Maia Webb is a fifth-grader from Morton. Brothers James and David Maughan attend Peoria grade schools, and Wyatt Howe is a Brimfield seventh-grader.

The opportunity to play, Van Cleve said, and the skills the athletes gain from sports is far more important than a trophy or a title. He would know. Though it may not be obvious, the Wildcats coach has a mild form of cerebral palsy.

“It’s very mild, and people don’t really notice, because I fell down a flight of stairs and broke my leg,” Van Cleve said. “My parents were told I would never walk, but because they did an Achilles tendon release, and with years of therapy, it improved things.” 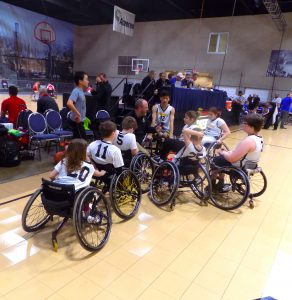 An Achilles tendon release, and a similar procedure, Achilles tendon lengthening, can help a person to walk flat-footed. Before the fall, Van Cleve’s parents were told he would never walk.

Though Van Cleve’s disability was diminished, it didn’t squash his desire to maintain a lifelong involvement in the special needs community. After graduating from the University of Illinois with a degree in architecture, he moved on to coaching.

While coaching, he met his future wife.

Katie Hogan Van Cleve is the executive director of the Heart of Illinois Special Recreation Association. The two met while he was a coach in Chicago, and, after a long-distance romance, they wed and he made the move to Peoria.

“Katie started the team here when she became the HISRA director. She noticed they had programs for all sorts of disabilities, but none for individuals with only physical disabilities,” Van Cleve said. “Sports are inclusive, and people with disabilities in sports should get equal opportunities in sports.”

Together, the Van Cleves coach, mentor, transport and train disabled athletes with the goal of creating leaders with skills that help them excel throughout their lives. 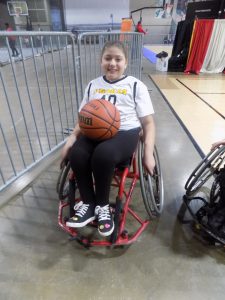 In March, Peoria Wildcats basketball teammate Maia Webb participated in the IHSA Wheelchair Basketball State Series at the Peoria Civic Center. “Kids with disabilities have a later entry into sports because people think they’re going to break,” coach Mike Van Cleve said. “It’s not uncommon for a new parent to thank us for pushing them out of their comfort zone.” (Photo by Holly Eaton/for Chronicle Media)

“We utilize sports not only as a way to help support the families of the athletes,” he said, “but also to challenge these athletes to take on more than society or what their families may think that they’re capable of taking on.”

Van Cleve, who played wheelchair basketball in college, passes on to his athletes a universal rule in sports; be adaptable.

“We want to teach the athletes that things will knock you down in life,” he said. “If you’re prepared, and you know what to expect or it’s similar to something you’ve experienced, then it’s not going to be that big of a deal. Pick yourself up and say, ‘Oh, that was interesting.’”

When he says, “pick yourself up”, he means it literally. Wheelchair athletes get rough with each other, and it’s not uncommon for player to get knocked over, sometimes numerous times during a game.

It’s common, however, for families to view a disabled child as fragile, and to subsequently shelter them from activities they think might do harm. On the contrary, Van Cleve doesn’t think there’s such a thing as “too young”.

“We will start athletes as early as 3, but we do not put them out on the court,” Van Cleve explained. “We teach them to throw and catch. We play basketball-related games, like tag and keep away.”

Sharks and Minnows, he said, is a favorite game that teaches kids hand-eye-coordination and strategic thinking. One player, the “shark” waits at center court to tag players as they race from one end of the court to the other. The game ends when the last “minnow” is tagged. 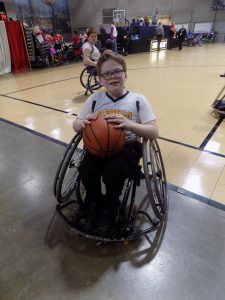 David Maughan, a fifth-grade student at Washington Gifted School in Peoria, plays basketball with the Peoria Wildcats. His brother, James, is in second grade at Thomas Jefferson Grade School, is also on the team. The Wildcats accept kids as young as 5. (Photo by Holly Eaton/for Chronicle Media)

“Kids with disabilities have a later entry into sports because people think they’re going to break,” Van Cleve said. “It’s not uncommon for a new parent to thank us for pushing them out of their comfort zone.”

Brantley was born with spina bifida, and recently underwent his 16th surgery. But that doesn’t hold him back from playing basketball or sled hockey, and his mother is all-in when it comes to her son playing sports.

“When he plays sports, I become the oddball out, not him. He feels included, that he’s on the same level with everyone else,” Olivia said. “It’s tough, but he goes right up to a senior player and he’s not intimidated, he has that aggression. And Mike teaches him how to work as a team and break the “me” thinking.”

The Peoria Wildcats maintain an inventory of custom sports wheelchairs and other specialty sports equipment that would otherwise be too expensive for most families to afford. To learn more about participation and volunteer opportunities with HISRA, visit www.hisra.org.