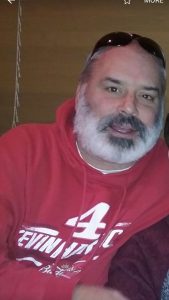 John Tyler, Jr., 49, of Washington, has been missing since Dec. 6. (Photo courtesy of Tazewell Co. Sheriff)

Concern continues to deepen among the family and friends of a Washington man who has been missing since Dec. 6.

John Tyler, Jr. was last seen between 10 a.m. and 11 a.m. at the Office on Main in Morton. On Dec. 12, Tazewell County sheriff’s deputies arrested Daniel C. Allbritton on a charge of obstructing justice during the investigation.

Allbritton, 52, of Washington, was arrested at 2 a.m. that Thursday, Dec. 12 and is being held, without bond, at the Tazewell County Justice Center. According to arrest records, Allbritton stands 6 -feet, 2-inches tall and weighs 220 pounds.

Police have not released any information regarding the circumstances of Allbritton’s arrest, but have not ruled out the possibility that he may face additional charges.

Tazewell County Sheriff Jeffrey Lower has described the investigation as “intensive” and encourages anyone with information about the case to contact his office.

Tyler, 49, has brown eyes and hair, is 6-feet, 1-inch tall and weighs approximately 190 pounds. Family members say Tyler was at the Par-A-Dice Casino in East Peoria the night before his disappearance, and was picked up there by a friend sometime after midnight.

He is said to have been carrying a black bag, and was wearing a red-hooded sweatshirt and jeans. A close family friend said Tyler wasn’t present for a birthday celebration that he would ordinarily have attended without fail.

A number of family and friends have taken to social media in hopes of finding help in the search for Tyler.

Randy Pruett of Normal is offering a personal reward of $1,000 to anyone who may have information on Tyler’s whereabouts, and, on Dec. 12, Lisa Montgomery posted to Facebook, “Let’s try this again, my name is John Tyler … my kids are worried sick and my family is missing me. I missed my son’s 18th b’day party … somebody knows where I am and I want to go home!!”

The investigation is begin handled by the Tazewell County Sheriff’s Department with assistance from the East Peoria Police and the Illinois State Police departments. Anyone with information regarding the case should contact Tazewell County Chief Deputy Tim Gillespie at 309-478-5607.