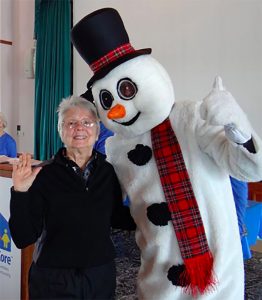 The Family Core Frosty 5K mascot poses with a participant during the after party for last year’s run/walk to raise funds for the nonprofit Peoria agency that works to help families and individuals strengthen their lives through a variety of services. This year’s Frosty 5K is Jan. 25. (Photo courtesy of Family Core)

Runners, walkers and their canine companions will be bundling up on Jan. 25 to participate in the 21st annual Frosty 5K to benefit Family Core.

The early-bird $30 entry fee for runners goes up to $40 after Friday, Jan. 17. The entry fee for a family of three is $80, and the entry fee for walkers is $30. The race course is 3.1 miles, while the walk is a one-mile hike along the Peoria riverfront and walking path. Dogs are welcome on both the run and walk but must remain on a leash.

Everyone finishes up at the Gateway Building at 200 NE Water St. for prizes, race awards, food, hot chocolate, water and other goodies.

The event has grown to attract hundreds of participants since its humble beginnings more than two decades ago as a fundraising walk that was originally designed to help buy coats, mittens and hats for children being served by Family Core programs. That walk attracted about 40 participants.

“At the time, I was on the board of Family Core, which was known then as Counseling and Family Services,” said retired attorney Rick Gentry. “I suggested we could expand the walk to make it a race to raise more money.”

A long-time runner, Gentry added, “Nobody had ever done a race in January before.”

About 50 participants turned out for the first fun run, which convinced the board to make it an annual competitive race. Organizers started inviting participants to bring their dogs about 10 years ago, which has turned out to be quite a popular and unique twist.

Emily Urbaniak was excited last year to find an event in January that she could do with her dog, Addi, after she had set a goal to run some kind of race every month of the year.

“There are not many races that will let you race with your dog,” Urbaniak said.

She actually ended up leaving Addi home last year, however, when race day temperatures dipped to ten below zero. “I was afraid her paws would freeze, so she had to back out. But I still ran it. And she will be running it with me this year for sure,” Urbaniak said.

Last year was the first time in the race’s history that organizers shortened the run to 2.3 miles because of the extreme cold. Of the 200 who had signed up to participate, about 100 braved the arctic air to actually run or walk, Lading-Ferguson said.

“As far as the weather is concerned, we have been extremely lucky over the years,” Gentry noted. “There have only been a few sub-zero days. We’ve run the race when there was ice on the course, but people who run in cold weather know what to do when there’s ice and snow.” 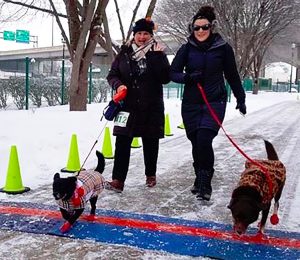 Two walkers and their dogs braved sub-zero temperatures last year to participate in Family Core’s Frosty 5K to raise funds for the Peoria nonprofit agency. Registration is underway for this year’s 3.1 mile run or 1-mile walk on Jan. 25. (Photo courtesy of Family Core)

Urbaniak said she learned about the Frosty 5K through her Peoria church, Imago Dei Church, which supports Family Core throughout the year via foster parent support and by providing tangible needs through donation drives, including school supplies and uniforms, diapers and wipes, and emergency needs such as clothing and furniture.

In addition to the Frosty 5K, Family Core hosts an annual golf outing in August and will be hosting a first-time Kentucky Derby viewing party fundraiser on May 2.

“Last year we served over 15,000 individuals,” Lading-Ferguson said, noting that the agency has outreach programs within Peoria Public Schools, Pleasant Valley and Pekin schools. “The benefits of the fundraising can assist with some of that programming we feel is in need in the community that aren’t being paid for (by other sources).”

About 87 percent of Family Core funding comes from the government, 5 percent from United Way, 4 percent from client fees, 1 percent from grants and 3 percent from fundraising and miscellaneous, Lading-Ferguson said.

“Family Core is really a best-kept secret because we’ve been around for 120 years but our name has changed multiple times, so people may not realize the services we offer or the impact we have in the community,” she added.

The agency began as Associated Charities and Philanthropies in 1900, assisting people who lived in tents at the riverbanks. Over the years, its name has changed to Family Welfare Association of Peoria, Child and Family Services, Counseling and Family Services and, as of 2010, Family Core. Strengthening families has always been a focus, however.

As for the future, Lading-Ferguson said, “One of the things we’re seeing in significant magnitude is that children and families are coming in at a higher level of trauma than they have over the last ten years, so we’re making sure we’re staying on the

cutting edge on all the trauma resources that are out there but also responding to all the needs in the Tri-County area.”

Among reasons Lading-Ferguson cited for the higher level trauma are an increase in homelessness and substance abuse. “And, of course, children are using technology at a younger age, which is a contributing factor,” she added.

Volunteers are always needed for Family Core programs and events, including the Frosty 5K. For more information on how to volunteer or participate in the race, visit the Family Core Facebook page or website at www.familycore.org or call 309-676-2400.