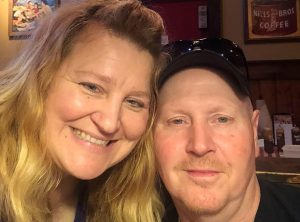 Bookstore owners Stacy and Bub Hardin will be wrapping and hiding about 100 books that have been banned or challenged over the years to raise awareness of censorship during Banned Books Week Sept. 22-28. (Photo courtesy of Stacy Hardin)

As a bibliophile who loves being out in the community, Peoria bookstore owner Stacy Hardin has found a unique way to raise awareness of censorship during Banned Books Week.

The owner of Book Rack Used Books and Gifts will be hiding about 100 wrapped books that have been banned in the past or are currently being challenged, creating a scavenger hunt of sorts around Peoria that she hopes will make people aware of censorship and encourage them to speak out against it.

“I don’t believe we should censor books,” Hardin said. “I believe everyone should have a voice, and that voice should be heard.”

Banned Books Week, which runs from Sept. 22-28 this year, was started in 1982 by the American Library Association to highlight “the value of free and open access to information and promote the freedom to seek and to express ideas, even those some consider unorthodox or unpopular.” The ALA Office for Intellectual Freedom tracked 347 challenges to library, school and university materials in 2018, targeting 483 books, programming, displays and more, according to the website www.bannedbooksweek.org.

This is the second year Hardin will be hiding banned books. Last year she hid about 25.

“I was trying to think of something fun to do besides just putting out a display of books,” Hardin said. “I wanted to get out in the community and find a way to get them involved in it.”

Hardin and her husband, Bub, wrap the books in white paper, and she writes a short description on the outside about why that particular book was banned. A note inside encourages the finder to post a photo to social media. 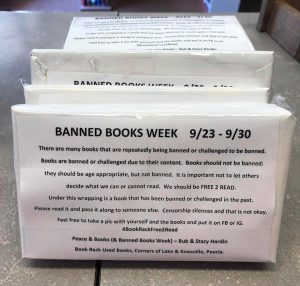 While wrapping and hiding 100 books may sound tedious to some, Hardin feels energized by it. “I don’t consider it to be a chore. I just get really excited about what’s going to happen, so it’s just really fun to do it,”  she said.

“It went great last year,” she added. “We hide them around Peoria and then post picture clues on our Facebook page of where to look. For instance, last year we hid one by the Rocky Mountain Chocolate Factory in the Metro Centre, and I wrote something like ‘You don’t have to go the mountains to find this book.’ ”

Hardin is planning to hide all the books within Peoria city limits but is considering allowing volunteers to hide some in neighboring communities if anyone’s interested in helping with that.

After compiling a list of 100 books that have been banned in the past or are being threatened with censorship currently, Hardin has been gathering titles she has in her shop at 4408 N. Knoxville Ave. and finding others at thrift shops and library sales.

Among books Hardin will be hiding this year are Mark Twain’s “Huckleberry Finn,” Harper Lee’s “To Kill a Mockingbird” and Nathanial Hawthorne’s “The Scarlet Letter.”

The Harry Potter books by J.K. Rowling, while applauded by some for getting children to read, have also been among the most frequently challenged books, according to the ALA. Among the biggest objections are claims that the books promote witchcraft.

“It’s important for people to educate their children on the difference between reality and fantasy. If you do that properly, you don’t really have anything to worry about,” Hardin said.

She had first-hand experience with censorship years ago when she and her now-grown children left a movie theater after watching a Harry Potter film and found a letter on their car claiming Harry Potter was an abomination and should be banned. 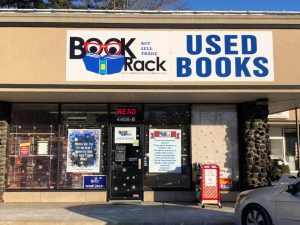 The owner of this bookstore at 4408 N. Knoxville Ave. in Peoria will be creating a scavenger hunt around Peoria of books that have been banned or challenged to encourage the public to speak out against censorship. “It’s a fun way to raise awareness and get the community involved,” Hardin said. (Photo courtesy of Stacy Hardin)

“My kids were really upset about it. I’ve always done a really good job teaching them the difference between reality and fantasy, so they knew (the movie) wasn’t real and was just imaginative. I’m a Christian, but I didn’t see anything wrong with them seeing the movie or reading the books,” she said.

Hardin cited racist themes and language as another reason some seek to ban books, such as “I Know Why the Caged Bird Sings” by Maya Angelou and “Of Mice and Men” by John Steinbeck.

“We’re trying to eradicate racism, but we don’t want to get rid of the books that might have it in them because we want to be able to know where we came from to make sure we don’t go there again. Pretending like it didn’t exist is not helpful. We can use it as a tool to learn,” she  said.

Peorian Hope Ware is planning to look for some of the books with her 11-year-old son. The mother of four said, “I am not a fan of book banning. I am a fan of teaching kids what constitutes a story worth reading. All writing is a reflection of the world view of the author, which may or may not be consistent with my own. But that does not make it not worth reading. I have often said that I teach my children to ‘eat the meat and spit out the bones.’ ”

Hardin hopes people who participate in the search for banned books will feel empowered to speak up. “We can’t hide from things and we can’t ban things. If you don’t like it, you don’t have to read it, but you shouldn’t take away that opportunity from someone else,” she said.

For more information, visit the Book Rack Used Books and Gifts Facebook page or call the store at 309-682-2666.