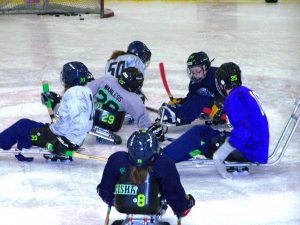 The Central Illinois Sled Hockey Association is comprised of “developmental” and “traveling” squads, with older and more experienced players on the traveling squad. The Thunder squad will be participating in a Chicagoland tournament in February and traveling to competitions in Minnesota and elsewhere late this year. (Photo by Tim Alexander/for Chronicle Media)

The Pekin Park District ice rink was filled with the sounds of young, spirited and energetic hockey players during a Sunday afternoon in January. Blades slashing the ice, the ‘smack’ of stick meeting puck, shouts of encouragement and direction: it could have been any youth or young adult hockey team gearing up for a big game or tournament.

But this was no ordinary team scrimmage. The Central Illinois Sled Hockey Association (CISHA) “Thunder” is a squad comprised of more than two dozen youth players who have a physical disability, yet the desire to be part of a team environment that challenges their individual and athletic skills.

Plastic-bladed sleds, equipment and ice time are donated, and the program is free to all participants. All CISHA board members, coaches and ice staff are volunteers who receive no financial compensation.

“The reward for me is to see these kids achieve their goals and increase their mobility skills through the game of sled hockey,” said Tim Kirk, founder, president and head coach of the Thunder. Kirk said he founded the team after his daughter was determined ineligible to play hockey in a city youth recreational league alongside her “able-bodied” peers.

Kirk, who lives north of Bloomington and grew up playing roller hockey, founded the Thunder in 2016. He and his wife Christine have three children. Their oldest is son Oliver, who plays traditional, stand-up hockey, while their middle child Violet, 7, plays sled hockey.

Their youngest, Eloise, is 5. Kirk said he first heard of sled hockey from a hockey-loving friend in Bloomington, and immediately thought of Violet.

“We are kind of a hockey family, and when we knew our middle daughter was not going to be able to play traditional hockey, we didn’t want her to be left out. We decided to do whatever it took to make sure she had the opportunity to play sports just like anyone else could,” Kirk explained.

The team was established with Violet Kirk and one other player. A rink-to-rink, school-to-school awareness campaign resulted in a squad of seven physically challenged youth who comprised the first official Thunder team.

Now in its fourth year, the team has enjoyed exponential growth in each year since its inception.

“For most of these kids, there are not a lot of sports program options available to them. This is their outlet, their sport and their social opportunity to be around other kids that are like them,” said Kirk. “A lot of times a kid will arrive shy and withdrawn, but to see them come out of their bubble after a few weeks, they are out there smiling, chasing and bumping into kids, and they are having a blast. It’s no different than any other hockey practice.” 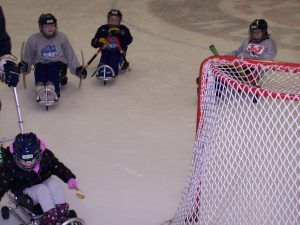 The Thunder hockey team is part of the Central Illinois Sled Hockey Association. It was founded by Bloomington area resident Tim Kirk after his seven-year-old daughter was not eligible to play on recreational youth hockey team with “able-bodied” players. (Photo by Tim Alexander/for Chronicle Media)

Putting out feelers through word-of-mouth and social media, Kirk and others have grown the league to include not only a youth team, but also an adult Thunder team — bringing the total number of central Illinoisans participating in the program to more than 50.

None of them would likely be playing any organized hockey were it not for the efforts of Kirk.

“No matter what their needs, the kids are allowed to be themselves and they are given what they need to be able to participate,” said Meg Penafore, who travels from Sterling with her daughter Maddie to Thunder practices in Pekin, Peoria and Bloomington.

Maddie, 13, was born with a congenital anomaly that requires her to use a plastic leg prosthetic. “Being on the team lets her be her. She doesn’t like it when people say that she is ‘inspiring.’ She just wants to be herself,” said Penafore.

Growing up at home with two older brothers, Maddie learned to ‘play rough’ at an early age, her mother said. The youth was inspired to play sled hockey after being introduced to Erika Mitchell, captain of the U.S. women’s sled hockey team, at the shop where the Penafore family purchases prosthetics.

After speaking to Mitchell, Maddie expressed a desire to pick up the sport. Mitchell, in turn, directed the Penafores to Kirk and the CISHA in the fall of 2019.

Learning to play sled hockey with a group of strangers was, at first, daunting, for the teenager, but “once she got the hang of it and wasn’t scared, she became fearless,” Penafore said.

Shera Brickner of Glasford enjoys the mobility and freedom that sled hockey provides for her daughter Bella, 13, along with the camaraderie and goal-sharing associated with belonging to a team. “It wasn’t instant love, but she was excited to be out with the other kids. Here, she is just like everyone else — there is no difference,” said Shera Brickner.

Bella, who attends Farmington High School, has a host of rare diagnoses, including CDG (congenital disorder of glycosylation), Dandy-Walker syndrome, and seizure and movement disorders. She is wheelchair bound, with little muscle control, and suffers from symptoms associated with an inoperable fatty mass in her cerebellum. 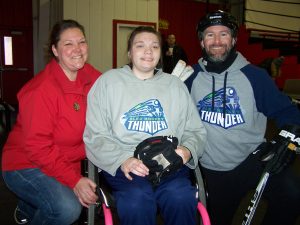 Bella Brickner,13, (center) with her mom Shera Brickner and Tim Kirk, founder, president and head coach of the Thunder. Bella is wheelchair bound, with a rare diagnosis that leaves her with little muscle control. (Photo by Tim Alexander/for Chronicle Media)

But on the ice, Bella is all smiles and sass, cutting a swath through defenders in her next quest to disrupt a pass or gain an assist. The sights and sounds of Bella and her teammates on the ice-— joy, frustration, pain, competition, camaraderie, good-natured ribbing — are essentially the same as seen and heard at any youth sports contest.

“On the sled she is centered and has better balance. Up until a month ago she had a ‘pusher’ (a volunteer who pushes the sled with an attachable arm and handle) because she couldn’t balance on the sled,” said Brickner. “Now, she is keeping up with the rest of them. She enjoys the most mobility when she is on the ice or in the water. This team has been a godsend to her.”

The CISHA is comprised of “developmental” and “traveling” squads, with older and more experienced players (the youth division ranges from 4-18 years of age) assigned to the traveling squad and more limited players starting out on the developmental team. Shera and Bella have attended a couple of out-of-town tournaments, and are looking forward to more such trips for the camaraderie and team-building they foster.

“She loved it from the first minute,” said Shera Brickner.

Parent Wil Harper, whose seven-year-old daughter Abigail of Washington plays on the Thunder youth team, said that through her involvement on the Thunder Abigail has gained both mobility and acceptance in spite of being challenged by cerebral palsy.

“She is part of a team, and it’s very helpful that she has a great support system of coaches and people around her. Everything is free of charge, with donated equipment and donated time, and it’s awesome to be able to watch her be able to skate and score a goal on her own,” Harper said. “As a parent, it is great in that I never thought I would be able to watch her participate in sports. It makes me feel good to see her feel good.”.

The Thunder will be participating in a Chicagoland tournament this month, along with competitions in Minnesota and elsewhere before ending the year with a national festival tournament in Pittsburgh at the end of the year.