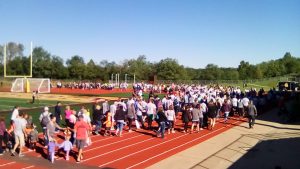 Despite its name, it’s no small wonder that OSF Healthcare Children’s Hospital changes lives through its Neonatal Intensive Care Unit.

Organized by patient families, the Small Wonders Walk raised more than $73,000 in 2017, but for OSF nurse, NICU parent and event organizer Molly Merriman, it’s not the money that matters, it’s the lives of those involved; those of the babies, the parents and the caregivers.

“The Small Wonders Miracle Walk has become one of the most important events in my life,” she said. “The friendships that I have formed on the planning committee have become my support group. We plan, we laugh, we cry, we share our stories, and we give each other a lot of advice.”

In 2012, Merriman’s sons, Abe and Vince were born at 24 weeks and three days. Their stay in OSF’s NICU lasted almost five months.

“I love not only recognizing the graduates, but the families that sat by their baby’s side day and night for one night, one week, one month, six months, one year,” she said. “Whatever time was spent in the NICU means that many days and nights without your new baby home. And to honor those families that never brought their baby home.”

Many of the people who attended the walk wore memorials to children who were unable to survive. “In Memory of My Brothers, Gabriel, Elliot and Miles,” read one Small Wonders bib. There were many more bibs, however, that were “In Celebration Of”.

The event began at 9 a.m., with a silent auction and a moment of remembrance, with the Celebration Walk immediately afterward.

By 9:40, the children’s activities, which included bouncy houses, face painting and family photos, began. Christian singer/songwriter and Illinois native Julie K. performed at later that morning in a concert that Merriman’s son Abe said he’d been really excited to see. 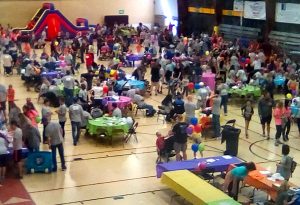 The Small Wonders walk featured a silent auction, kids’ activities, drawings and a concert from Julie K. held inside the EastSide Center in East Peoria on Sept. 22. (Photo by Tim Alexander/for Chronicle Media)

Dr. Jawad Javed, the newly-appointed medical director of neonatology was at Vermont Oxford Conference in Chicago with OSF colleagues and could not attend the event, but sent a very heartfelt message to those in attendance.

“Our staff is currently going through some changes with the retirements of Dr. Kamlesh Macwan at the end of this month, and Dr. Jim Hocker at the end of November,” he said. “These two gentlemen have cared for babies for over 50 years combined. The initiatives started and implemented under their direction cannot be understated. Their impact in our neonatal intensive care unit will be felt for generations to come.”

OSF is currently recruiting three additional neonatologists, and the hospital was recently granted the opportunity to begin a neonatology fellowship program, with the goal to welcome its first fellows by July 2020.

“This is very exciting, as this is the first fellowship in pediatrics in Peoria,” Javed said. “We also have several research initiatives ongoing, including antibiotic stewardship, nutrition and opiate/neonatal withdrawal.”

Recently, OSF Children’s Hospital of Illinois celebrated 75 years of neonatal care. In 1942, The Sisters of the Third Order of St. Francis established the hospital’s first Premature Infant Station, with incubators that, by today’s standards would be considered primitive, helped small babies survive.

The hospital’s NICU is now home to a 64-bed combined unit, with a Level IV Neonatal Intensive Care Unit and  Level II Intermediate Care Unit, and staff are equipped to provide intensive and intermediate care to the tiniest, and most frail patients at the hospital.

“I hope that I can encourage one family in that crowd that what they went through, whatever the outcome, you have helped someone who is currently sitting in that same spot in the NICU, staring at their baby,” Merriman said. “Thank you to every donor, every attendee, every one of my family members that helped me out … most importantly, I want to thank Vince and Abe, my reason.”

For more information on OSF Children’s Hospital of Illinois NICU, and ways to help or donate, visit https://www.osfhealthcare.org/nicu75/.