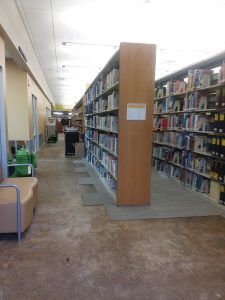 Workers removed carpet from several damaged areas at Pekin Public Library. Early December storms caused storm water sewage to back up into building, and the floors will require professional cleaning before the library can reopen to the public. (Photo by Holly Eaton/for Chronicle Media)

Pekin Library is closed for the remainder of the month and into the new year after a deluge of water from the early December storms poured into the building’s lower level and damaged flooring and drywall.

According to National Weather Service storm surveys, 27 tornadoes touched down in Illinois Dec. 1; one of the worst December tornado outbreaks in on Illinois record. Tazewell County was spared the destruction that was heaped on Taylorville, but not completely.

“We have damage in several areas; Youth Services, Adult Services, Quiet Reading Room, Teen Domain,” said Emily Lambe, Pekin Library public relations director. “All books and materials are high enough that they weren’t touched, but because of the flooring, all these bookshelves have to be removed.”

At first, it didn’t seem like the flooding was going to pose much of a problem. Library management had only planned to close the library for a week, as Servepro Restoration Services cleaned up the mess.

“Some areas are just rain damage, but other areas we had the storm sewers back up into our drains,” Lambe explained. “That is the major problem. So, because sewage was involved, basically, anything that was wet has to be removed — drywall, furniture, some cabinets, carpeting, etc.”

Public restrooms and staff areas also need to be cleaned up. Wiring and computer equipment are fine, she said, as well as the upstairs Community Room, staff areas, storage rooms and restrooms.

In 2015, the 47-year-old building at 301 S. Fourth St. underwent a $6 million renovation and expansion. A ribbon cutting ceremony was held Nov. 14 of that year. Unfortunately, some of those renovations will need replacement.

The library will remain closed until Jan. 31 so that the cement flooring can be sanitized, the drywall is repaired, furniture replaced and bookshelves returned to their proper locations. New carpeting will also need to be installed.

In the meantime, library staff are attempting to provide as many partial services as possible, such as the Polar Express Pajama Party, which was slated for Dec. 3 and 16. The party will be hosted at the Milller Center across from Pekin Park Pavilion, and all who registered for the Dec. 3 event can go to the upcoming party.

While the library is closed, no overdue fines will be levied on material that was checked out, but the library will notify the public of when the book drop is back in usable order. To keep up with library news, visit www.pekinpubliclibrary.org.