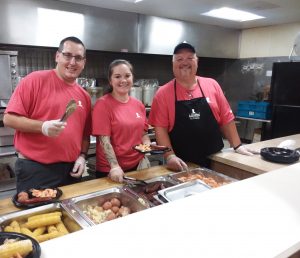 With help from many volunteers, including Jimmy Vlasis, right, Brandy Rassi and Jimmy Wendland, the 10th annual St. Jude Corn and Shrimp Boil raised $29,000. The event was sponsored by Hy-Vee and hosted by the Itoo Lebanese-American Society in Peoria. (Photo by Holly Eaton/for Chronicle Media)

When Amos Muzyad Kairouz, the son of Lebanese immigrants, was young, he vowed to St. Jude Thaddeus, the patron saint of lost causes, that he would build a shrine in his honor, should he find fame and fortune.

‘Peoria was the first affiliate and Jim Maloof was the founder here,” St. Jude Midwest Affiliate board member Mike Joseph said. Maloof, Peoria’s former “singing mayor”, was of Lebanese descent, as is Joseph.

Over the decades, he said, the connection between the beloved St. Jude foundation and the American-Lebanese societies has become less known, and people generally respond, when hearing of it, with a surprised, “Ah, I didn’t know that!”

On July 21, Joseph helped host the 10th annual St. Jude Shrimp and Corn Boil at the Itoo Society Hall in Peoria. Itoo is a misspelling of the inland Lebanese village, Aitou, a primarily Maronite Catholic community, like that of Danny Thomas’ parents’ birthplace in Lebanon.

“Itoo was founded in Peoria by Aitou immigrants who wanted to help the community, and we still have many big families here, the LaHoods, the Kouri’s,” Joseph said. “In Aitou, there are probably only around 500 people, but in Peoria, there are probably 5,000 descendants from those who came from there in the early 1900s.”

Joseph admitted there’s another reason for hosting the fundraiser at the Itoo Hall on Farmington Road, aside from the Lebanese-American connection to St. Jude. The hall seats around 400 people, which comes in handy as the event has become quite popular.

The shrimp and corn boil is a small precursor to the St. Jude Runs events that follow on the first weekend of August. Though the money raised at the Itoo Hall is notable, Joseph said the entire St. Jude organization needs $2.1 million daily to operate. 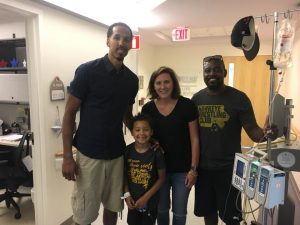 Young Aiden Williams of Washington was diagnosed with Acute Lymphocytic Leukemia at the beginning of 2018. While undergoing treatment at Peoria’s St. Jude Midwest Affiliate, he and his mother Chelsea and father T.J. met pro basketball player Shaun Livingston. Aiden is doing well and will begin third grade in August. (Photo courtesy of T.J. Williams)

To illustrate again the Lebanese connection, Joseph said every penny raised for the organization is managed by the American Lebanese Syrian Associated Charities (ALSAC), which was founded in 1957 by Danny Thomas, and is responsible for raising 75 percent of all of St. Jude’s operational costs.

“All of the money goes to ALSAC, and as crazy as it sounds, what they did in the 60s was the right thing to do for this time,” Joseph explained. “They cure for cancer has to be found at a place like St. Jude, instead of a pharmaceutical company that looks for profit.”

As a benevolent organization, ALSAC freely shares, and will continue to share, all research findings and resources. When Thomas first founded St. Jude, the rate of recovery from the most common form of children’s cancer, Acute Lymphocytic Leukemia (ALL), was 2 percent. Today, the all success rate is at 94 percent.

“We’re finding new cures for these catastrophic illnesses all the time,” said Joseph, who has volunteered for St. Jude for more than 40 years. “Still, 94 percent is six out of 100 children. The overall cure rate at St. Jude is 80 percent which means one out of five is not making it.”

That’s the driving force that keeps the momentum going for the constant fund raising efforts, such as St. Jude Runs, which was formed in 1982, and has since raised more than $56 million. That initiative was co-founded by former Peoria County Sheriff Michael McCoy.

McCoy, who now serves as police chief for the City of Washington, then founded the St. Jude Memphis to Peoria Run in 1995. Runners in this year’s Memphis run leave for Tennessee on July 30, and will return to Peoria, by relay, the following Saturday. 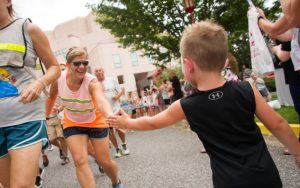 In the meantime, local runners will put their feet to the concrete Saturday morning, in what has become as much a carnival as it has a fund raising initiative.

Many of the participants dress in outrageous outfits, and volunteers from the local Star Wars Mandelorian Mercenaries will collect donations from drivers.

That day, the runners will converge in Peoria where they’ll have the chance to eat, clean up and join at the Peoria Civic Center for the St. Jude Telethon. The telethon runs from 6:30 that evening until midnight, and will air live on WEEK-TV News 25.

“All of the run cities will run into downtown Peoria, they’ll shower, then head to the Civic Center where they’re announced as they run in. They’ll present their checks then. I’ll present the check from our fundraiser,” Joseph said. “Before that, I’ll get to speak at a lot of the morning run kick-offs. It’s a very rewarding day. I look forward to it every year like Christmas.”