Need to charge your vehicle? Do it for free at one of four charging stations sponsored by Uftring Automall. Charging stations are located in The Levee District at The Civic Plaza parking lot (two stations) and at the parking lot along the Pedestrian Promenade between Target and Gordmans (four stations).

Downed limbs from the Dec. 28 ice storm are being picked up by the East Peoria Public Works Departmentt. Pickup will be on or after a resident’s normal trash collection day. Branches can be no larger than 4 inches in diameter and 4 feet long. Brush must be stacked with the ends facing the curb. The brush pile must fit in an area no larger than four feet, wide, four feet high and eight feet long, which is approximately the size of the bed of a normal pickup truck. Leaves are not included in this special collection. For more information, call (309) 698-4716. 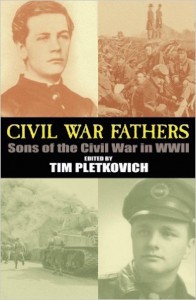 Hear the story of eight families whose fathers fought in the Civil War, and whose sons and daughters fought in World War II.  Based on interviews with the surviving WWII veterans, this book views the Civil War through the eyes of children listening to their fathers’ stories, and World War II through the eyes of the same children as grown-up participants. The book evolved from an interview project involving middle school children in Peoria, into an amazing book encompassing almost 100 years of American history in two generations.

Civil War Fathers not only highlights these remarkable families, but offers a glimpse into the heart of middle America during the late 19th and early 20th centuries through the eyes of these families. It chronicles the changes from the Civil War to World War II that helped to create the America of today, and through the colorful and varied narratives recreates a very different time in America.

This program is free and open to the public.  Books from the author will be available for purchase and signing.  For more information, please call the library’s Information Desk at 347-7111, Ext. 0.

At a special City Council meeting Jan. 11,, Washington city leaders and staff mourned the death of Tony Maggio, a 28-year veteran of the Washington Police Department who recently passed away. Following a moment of silence, Chief Don Volk recognized Commander Maggio’s dedication and service to the community.

“We have not only lost a valuable employee, but we have lost a friend,” said Chief Volk.

Maggio began his career with the city in 1987 as a part-time dispatcher/police auxiliary. He earned two promotions during his tenure with the department. In 2010, he was appointed sergeant and supervisor of the part-time police unit and then commander of the part-time unit two years later.

He was the Washington Police Department part-time Officer of the Year in 2012.

“I can’t imagine special events in Washington without Tony, he worked them all and was always a professional,” said Mayor Gary Manier. “Tony’s passing will leave a huge void within our Police Department and community.”

Funeral services were held Jan. 12. .at the Calvary Evangelical Mennonite Church in Washington.

Program will discuss ‘How do Judges Get and Keep Their Jobs?’

“How do Judges Get and Keep Their Jobs” is the topic of discussion for Drinks & Dialogue, a program hosted by the League of Women Voters of Greater Peoria. The public is invited to participate in the dialogue, at 5:30 p.m. Wednesday, Jan. 20, at the Hearth Restaurant, 4604 N. Prospect Road, Peoria Heights.  Social hour begins at 5 p.m.

This dialogue about judge appointment, election and retention will open with comments from retired Judge Glenn Collier. The discussion will be facilitated by League members.  Collier was an associate and circuit judge for 16 years, serving after his retirement as corporation counsel for the city of Peoria. His comments will be inclusive of the various methods that judges are appointed, elected, or retained.

The League believes that democratic government depends upon informed and active participation at all levels of government.

Drinks & Dialogue is offered monthly, on the third Wednesday of the month, for one hour starting at 5:30 p.m. at the Hearth with local, state, and national political topics.

The League is a non-partisan, issues oriented, volunteer, member-directed organization with membership open to both men and women in Peoria, Tazewell, and Woodford counties. For more information, go to www.lwvgp.org.

University of Illinois Extension will be presenting the first in its 2016 series of Local Government Education webinars  from noon to 1 p.m. on Thursday, Jan. 21  The live webinar will focus on key legislative issues affecting counties in Illinois followed by a  question and answer session with legislative representatives from the Illinois Association of County Board Members and the National Association of Counties.

Visit http://web.extension.illinois.edu/bcjmw/ to register for the 2015 Illinois Legislative Update webinar; or contact Pam Schallhorn, community and economic development educator for University of Illinois Extension at (618) 327-8881 for more information. Archived recordings of the 2015 Local Government Education webinar series are now available on-line at http://web.extension.illinois.edu/lgien/online.cfm.

With extreme weather hitting the Central Illinois region over the past few weeks — from floods to ice storms to snow and bitter cold — authorities are reminding residents  time to think about how you can be better prepared for severe weather or other hazards during 2016. One of the first steps toward preparedness is having an emergency supply kit stocked with basic items that are critical during an emergency, such as: