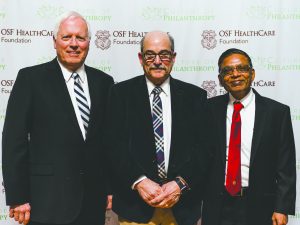 Doctors Stephen Bash, Richard Pearl and Jitendra Shah have been honored by Rep. Darin LaHood (R-18th) and Rep. Cheri Bustos (D-17th) with an official Congressional Record for their for outstanding careers.

Session will train volunteers to aid in natural disasters

Such as in the case of fallen trees, LERT volunteers with chain saw training cut up trees and move them aside so vehicles can get through and the cleanup can start.

The central Illinois LERT has about 950 members.

Three OSF HealthCare Children’s Hospital of Illinois physicians have been presented with a Congressional Record, honoring their careers dedicated to transforming the landscape of pediatric care in the Peoria community.

The three physicians transformed the face of OSF Children’s Hospital, patient care and the community by advocating for the expansion of services for children and, later, the JUMP Simulation and Education Center. Their efforts were instrumental in the construction of the new OSF Children’s Hospital building, which opened in 2010, and was largest construction project in the history of Peoria. In 2013, the $51 million JUMP Center opened, redefining clinical training and revolutionizing patient care.

The future of these stores has not yet been announced, while the company contemplates future plans. Those plans include the rebranding of 200 Family Tree locations to Dollar Tree stores. A thousand remaining stores are set for renovations and will incorporate new $1 Dollar Tree merchandise and alcohol sections.

The news comes on the heels of the company trying to revamp these stores last year to make them more exciting for shoppers.

Dollar Tree and Family Dollar are budget-friendly stores, known for selling groceries, accessories, and home goods at prices that start at $1 and don’t typically go past $10. The two stores used to be rival discount chains, but in 2015, Dollar Tree bought Family Dollar for $8.5 billion.

Pekin’s Got Talent contestants to perform

Pekin residents can show off their talents at Pekin’s Got Talent 6 p.m. March 16 at First Baptist Church of Pekin, 700 S. Capitol St. Doors will open at 5:15, and admission is free. The family-friendly show will feature singers, bands, comedy acts, dancers and other entertainers who will compete for cash prizes courtesy of Autumn Accolade Licensed Assisted Living. The first-place winner will receive $500; second-place $250; and third-place $100.

Quest Charter Academy’s third annual Throwback Prom fundraiser will be held at 7 p.m. March 15 at Par-A-Dice Hotel Casino, 21 Blackjack Blvd., East Peoria. Adults of all ages can enjoy live music from JammSammich, heavy hors d’oeurves, photos, a raffle and a cash bar at this 1970s-themed event. Tickets are $50 each and are available at questthrowbackprom.com.