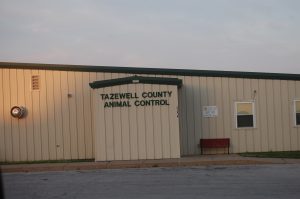 The Tazewell County Animal Control in Tremont. The County Board Health Services Committee is reviewing policies and practices at the agency following the killing of the wrong dog at the shelter.

In the wake of pending litigation, Tazewell County Animal Control employees are proposing new policies regarding the identification, quarantine, cleaning and euthanasia of animals at its Tremont facility.

“A lot of the policies are similar to policies that were there, they just weren’t written down,” Tazewell County Board Health Services Committee Chairman Greg Sinn, R-Tremont, said. “We have a communication problem. We’ve challenged the director to use some best practices and write those down … there seems to be a disconnect. To rectify that, we’re doing a stricter animal ID plan that everybody’s a part of, and everybody’s double-checking.”

On Aug. 13, TCAC director Ryan Sanders mistakenly euthanized a micro-chipped family pet that was surrendered to the facility for a 10-day bite quarantine.

Moses, a white Labrador mix, was taken by his owner, Tony Wang of Morton, to the facility on Aug. 3. In the early morning hours on the following Wednesday (Aug. 8), Sanders intended to euthanize a dog with a golden color but selected Moses, instead, without scanning for a microchip.

Wang said he asked Sanders if he could tell the difference between a white dog and a golden dog, he answered yes,  but when asked why he proceeded with the euthanizing, Sanders couldn’t explain why, and said he also couldn’t explain why he didn’t check or scan for a microchip.

The Wangs have since retained Springfield attorney Stephen Hedinger, a member of the Illinois State Bar Association’s Animal Law Section council. Sanders has since declined to comment, citing pending litigation.

“If we just walked out of there and did nothing about it, they would just go on with it all and forget about it,” Wang said in August. “Money’s not the issue. Our family member was wrongfully executed by an individual who did not care. Something has to be done to prevent this type of tragedy from happening again.”

On Oct. 31, the Health Services Committee will vote on the policies and procedures that have been assembled by Sanders and TCAC employees. Among them, the proper cleaning of cat cages and rabies specimen testing guidelines.

Previously, vicious animals were only identified by request. The new policy states that all animals will be identified by stickers; green for “owned animal”, red for “biter”, black for “aggressive” and orange for “available for adoption.”

All animals are to be scanned for microchips, and Sinn said TCAC will purchase a scanner that can identify all microchips.

“A scanner will be there for microchipping, to be sure it’s the right animal,” Sinn said. “They will be purchasing a new scanner that will scan all chips, or find the presence of a chip.”

Animals selected for euthanasia will be selected on a basis of impoundment date, health and available space. Strays will be required to be impounded for four, full workdays, unless they have identification, such as a tag or a chip. Those animals will be held for seven workdays.

According to the proposed euthanasia procedures, sedation with a mixture of the federally controlled substances, Ketamine and animal Xylazine “may” be used.

According to the U.S. Federal Drug Enforcement Administration, Ketamine is used on cats and sub primates. Xylazine is a large animal drug, reserved for use on caviidae; large hoofed animals such as elk and deer.

When animals are taken to the euthanasia room, “they must not be carried by the scruff of the neck, by the skin of the back, nor will they be drug by the leash through the kennels and halls. Every attempt will be made to be calm, quiet and reassuring to the animals,” the county policy states.

The policy includes directions for properly restraining animals during euthanizing, and animals are to be placed on the table or the floor “to ensure that it’s dead.”

Two people should be present during each euthanizing, unless the shelter is closed when the animal is euthanized. Moses was killed in the early morning hours, before the facility opened.

Wang said he has received no communication from anyone associated with TCAC, and has learned nothing of the proposed policy changes.

“We saw the report on WMBD that they were trying to put together a policy, but it still needs to be voted on,” Wang said. “We’ve had no communication from them at all, except a first initial offer from their attorney. They wanted to know what we were looking for. We don’t want to settle.”