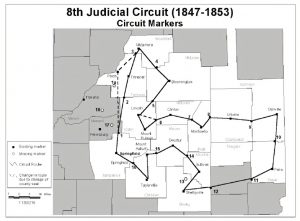 On Feb. 21st at 10 a.m. at the Tazewell County Courthouse in Downtown Pekin, a wreath laying and rededication event will take place recognizing the 100th Anniversary of a series of monuments throughout Central Illinois outlining the route taken by then attorney Abraham Lincoln while traveling the then Eighth Judaical Circuit.

The event is free and open to the public.

A series of speakers will talk about the impact Lincoln on Tazewell County. Keynote Speaker will be nationally renowned Lincoln scholar and author Guy Fraker.

City of Washington Mayor Gary Manier and City of Delavan Mayor Elizabeth Skinner will talk about the legacy of Lincoln within their communities.

Following the spekaers, a wreath will placed at the Tazewell County Courthouse Marker. Similar wreaths will be placed latter by mayors Manier and Skinner at the Countyline Markers outside their communities.

Set to be announced at the event, Tazewell County Clerk John C. Ackerman has purchased and will be donating copies of Guy Fraker’s book “Looking For Lincoln in Illinois: A Guide To Lincoln’s Eighth Judicial Circuit” to all Tazewell County libraries. Fraker will have copies of this book available for purchase at the event.