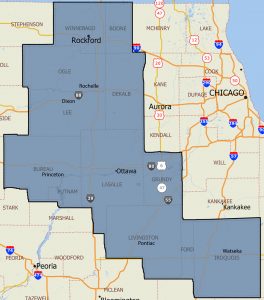 Adam Kinzinger had no opposition when he ran for reelection to Congress two years ago and pulled in 70 percent of the vote in 2014, the last time he had a foe.

There’s plenty of competition this time around.

The Channahon Republican has both a primary challenger in March plus four Democrats seeking that party’s nomination to oppose him in November.

While some Republican colleagues face a potential Democratic backlash in 2018, the 39-year-old fourth-term GOP representative looks like the favorite.

The district is dubbed “safe Republican” by one national analyst and was carried by President Donald Trump by more than 17 point in 2016. Kinzinger has a $1.8 million campaign war chest late last year, which far outdistances his competition.

He’s also been a reliable vote for the Republican agenda. In House votes this year, Kinzinger backed Trump’s position in 98 percent of a series of votes as recorded by the political website fivethirtyeight.com.

He was also a strong supporter of a Republican tax overhaul package late last year.

“According to the Tax Foundation, this tax plan will create more than 37,000 new, full-time jobs here in Illinois,” Kinzinger said in a statement. “Families in my home district and around the country will benefit from a new family credit that helps with everyday expenses, and will also provide streamlined education benefits to help them save for and better afford college tuition and education expenses, including apprenticeships.” 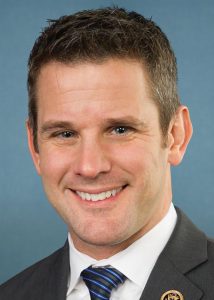 Despite the party-line votes, Kinzinger also has taken more moderate positions as surveyed by at least one conservative rating of a series of 56 votes taken through last July.

The Heritage Foundation gives Kinzinger a 39 percent score, well below the House Republican average of 65 percent.

Kinzinger, an Illinois State graduate and Air Force veteran, has served in Washington since first elected in 2010 to represent the old 11th District. He was elected to the first of three terms from the 16th District starting in 2012.

He had a tougher road to election in those early campaigns. Kinzinger had to beat incumbent Rep. Debbie Halvorson, a Democrat, in a head-to-head 2010 campaign. In the first campaigns following redistricting, Kinzinger defeated Rep. Don Manzullo in the 2012 primary and went on to a 16th District general election victory.

The sprawling 16th District runs from the Wisconsin border around the Chicago area to the Indiana state line, embracing the state’s third largest city (Rockford), small towns and rich farmland.

It includes all of Boone, Bureau, Grundy, Iroquois, LaSalle, Lee, Livingston, Ogle, and Putnam counties and parts of DeKalb, Ford, Stark, Will and Winnebago counties.

Kinzinger’s GOP challenger is Jim Marter, an Oswego resident and Kendall County Republican chairman. Marter, who does not live in the district, unsuccessfully ran for the GOP nomination for U.S. Senate.

Representatives are not required to reside in their district, but must live in the state they represent.

Jaye DeBates, a construction company owner from McNabb who had complained that Kinzinger was not conservative enough, withdrew from the race when his nominating petitions was challenged by Marter.

Democratic candidates include Neill Mohammad, a healthcare and political scientist from DeKalb. He had $54,732 in campaign funds available — most among Democratic contenders — in the most recent reporting period.

Primary elections are scheduled for March 20. Democrats currently hold 11 of 18 seats in Illinois.