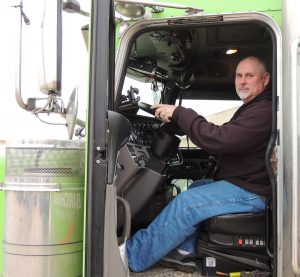 Recil Hensley sits inside the cab of his truck, Optimus Lime. Hensley was named Dec. Trucker of the Month for Birchwood Transport. (Photo by Lynne Conner / for Chronicle Media)

Hard work, dependability and a commitment to on-the-job safety has paid off for Recil Hensley.

The Roscoe resident was named Driver of the Month for December by the Wisconsin Motor Carriers Association and is now up for the group’s driver of the year honors.

Hensley, an owner-operator driver for Birchwood Transport, Inc., Kenosha, Wis., was nominated for the honor by Scott Mulqueen, director of human resources and safety at Birchwood.

Hensley, a truck driver for over 25 years, learned of the recognition in early December after Mulqueen had approached him with the idea several weeks before.

“Scott asked me if I was interested in being nominated for Driver of the Month and if I would be willing to fill out forms on my end while he sent in a nomination letter,” Hensley said.  “I was the only trucker nominated from Birchwood Transport and most of the criteria for the nomination was based on my safety records.”

The glowing nomination letter sent to the Wisconsin Motor Carriers Association by Mulqueen not only commends Hensley on his dependability but also his safe driving record.

“Recil is one of what I call our ‘NO TOUCH’ owner operators … The drivers that I put into that category are those to whom we can assign a task and never have to think about it again. He is a driver who takes his duty to the general public and other trucks seriously.  His work ethic can only be matched by his great personality and helpful demeanor…” Mulqueen wrote.

In concluding Hensley’s nomination, Mulqueen added, “Recil is one of the most safety minded drivers in our fleet…He has taught many drivers here by his example and mentors others by preaching his values of safety and professionalism…He truly understands the responsibility of our industry and its importance to the American economy.”

Hensley was up against several other nominees from across the state of Wisconsin for the December honor.

In March he and his wife, Mary Beth, will travel to the Wisconsin Dells for an awards banquet where Hensley will compete against the 11 other 2018 nominees for Trucker of the Year.

As an owner-operator driver, Hensley owns the truck cab portion of his semi and currently hauls trailers of turkey by-products for Birchwood Transport.  His 2016 Peterbilt long nose neon green truck is hard to miss as he travels his route through Wisconsin, Iowa, Indiana and Illinois. 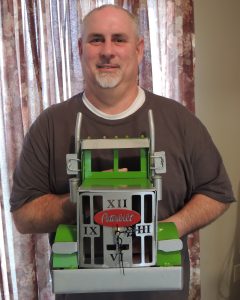 Roscoe resident Recil Hensley with a Christmas gift — a replica of his truck, Optimus Lime — that his son made in high school welding class. (Photo by Lynne Conner / for Chronicle Media)

“My truck’s nickname is Optimus Lime, which was thought up by my son Recil and his friend Devin.  We were talking one morning at the bus stop while my truck was still on order and Devin told Recil that I should name the truck Optimus Lime.  I ran it by some of my trucking buddies and we all thought that is sounded cool, so the name stuck,” Hensley said.  The truck’s name is prominently displayed on the back of the cab.

Hensley has a designated route that he follows six days a week with Sundays off.  The cab of his truck is a sleeper, so he can stay overnight in the cab once he is parked at a truck stop.

“Since I have a set route, I can usually stay at the same truck stops during the week,” he said. “There’s a truck stop in Iowa that I stay at about three days a week and I have gotten to know the managers and employees, so they treat me like family.  I spend a lot of money there buying food and fuel and sometimes they’ll give me a perk or two for my ongoing business.”

Hensley said that even though his schedule takes him away from home during the week, it’s better than other trucking schedules that take truckers away from their families for a month at a time.

“I have to pick and choose which of Recil’s and Riley’s events I can attend and it’s tough,” Hensley said.  “I have had to sacrifice seeing a lot of ‘firsts’ in their lives too.  They understand but it bothers them.  It’s tough on a family, it’s tough on Mary Beth, but they understand these sacrifices are a part life for our family.”

“The main thing I am concerned about while driving is safety and making it back home to the family,” he said. “Firemen and police officers leave for their shifts and there is no guarantee that they’re going to come home; it’s the same with truck drivers.  The main priority for any truck driver is to make it back home safely.”

Having a safe drive also depends on doing a thorough pre-drive check of the truck and its components.  As per Department of Transportation regulations, Hensley walks around his truck prior to departure and checks the tires, lug nuts, mirrors, the hood, the engine, oil levels, overall fluid levels and the brakes.

Once Hensley is on the road, his commitment to safety requires a constant vigilance of his surroundings and fellow drivers.

“I’m always looking out on the road, scanning the mirrors, checking the perimeters of my truck and watching out for cars and their actions on the road.  My head is always on a swivel looking out at my surroundings,” Hensley said.  “I’m not only driving my semi; I’m also driving other peoples’ cars in my mind.  I try to predict what they are going to do, so I can leave myself a safety maneuver to avoid an unsafe driver or possible accident.”

Hensley acknowledges that there are both good and bad truck drivers out on the highways just as there are good and bad motorists.  “What people don’t realize when they are driving a car is that the stopping time for a semi-trailer truck is a lot longer than it is for a car.  I’ve got 80,000 pounds of steel behind me that doesn’t stop on a dime.”

Hensley’s Driver of the Month award is certainly a well-deserved honor for his hard work, dedication to safety and personal sacrifices while working in the ever-demanding transportation industry.  “This honor really hasn’t sunk in yet.

I’ve never had an award like this ever in my career, so it’s kind of nice to see the hard work…pay off,” he said.

“I like what I do having a dedicated trucking run each week and I like where I’m at with Birchwood,” he said.  “It’s like being paid to go on vacation and see different parts of the county; but it’s always nice to go home to the family at the end of the week.”